Fifth Season announced today it has partnered with NHL Hall of Famer and co-owner of the Pittsburgh Penguins, Mario Lemieux. The company has also launched a new e-commerce website with expanded product offerings and all products shipping from Fifth Season’s newly-opened indoor vertical farm.

The partnership will accelerate Fifth Season’s expansion plans as the company scales the flagship commercial-scale farm in Braddock, PA, a 60,000-sq.-ft. solar-powered farm with twice the efficiency and capacity of traditional vertical farms. The company’s smart design will allow Fifth Season to produce and market over 500,000 pounds of produce in the first year of full operation. Through AI and robotics, Fifth Season's technology tends to each plant’s individual needs at unprecedented levels of efficiency and precision, providing the perfect light, nourishment and environment for healthier produce, higher yield and better flavor.

“Fifth Season’s exciting technology is a game-changer for Pittsburgh,” said Lemieux. “They are positively impacting people's health and happiness by growing large quantities of delicious fresh food, right here in our hard-working industrial communities. Fifth Season is advancing the legacy of our city and I am proud to partner with the team.” The new, fully-operational farm is accommodating Fifth Season’s increased demand from a growing list of retailers and restaurants, including an expanded retail presence with Whole Foods and Giant Eagle. At the farm, Fifth Season is growing more than 10 unique leafy greens and herb crops with two proprietary salad blends, spinach and arugula hitting shelves first. The company has plans to quickly expand into more leafy green varieties within the year. 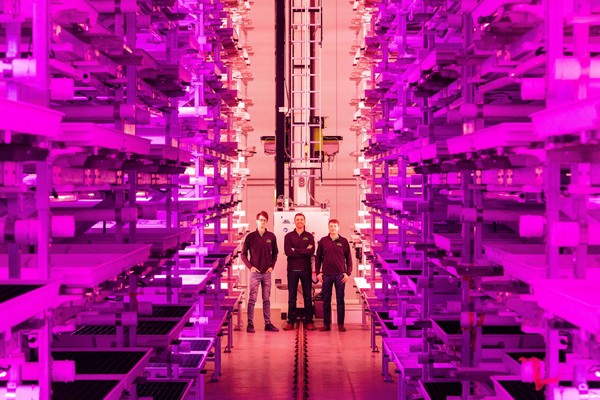 Founder of Fifth Season in the Biodome

“The events over the last several months have revealed that resilient supply chains and consistent access to fresh foods are more critical than ever,” said Fifth Season co-founder and CEO Austin Webb. “The opening of our first commercial-scale farm comes at a perfect time as Fifth Season works to accelerate our plans to reach new and expanding customer bases.” The company also announced this month the launch of their industry leading direct-to-consumer program, providing both salad greens and salad kits for order and delivery via Fifth Season’s e-commerce website at www.fifthseasonfresh.com. Customers in the Pittsburgh area can place their order directly via the website to have locally-grown and crafted salads delivered right to their homes.

“Consumers want to connect with farms that reflect their values, and they seek convenience in how they receive their fresh food, whether that’s from their favorite grocer, delivered directly to their doorstep, or picked up from the farm,” said Webb. “Everybody prefers locally grown fresh food to flavorless, days-old greens and we’re proud to provide solutions that make choosing local and living healthy easier.” By delivering its produce within hours of packaging, Fifth Season is setting a new standard for fresh food, at a price competitive with conventional produce. All Fifth Season produce is grown locally and without pesticides and has an average shelf life of weeks, not days. What’s more, Fifth Season’s produce is grown using up to 95 percent less water and 97 percent less land than conventional farming.

These announcements top off a monumental quarter for Fifth Season, which won a World Changing Ideas Award from Fast Company, an honor that highlights projects actively changing what we eat, how we eat and how we get our food. The company also won the Best Build-to-Suit from the NAIOP for its indoor vertical farm design. During the COVID-19 pandemic the company has increased donations of fresh greens and salad kits to essential workers and community organizations throughout Pittsburgh.