In a first financing round, PlantLab has collected € 20 million in growth capital from De Hoge Dennen Capital. PlantLab, which developed a patented technology for vertical farming, is looking to scale up, using the funds to open indoor production locations in, among others, the Netherlands, the United States and on the Bahamas.

In the past decade, PlantLab has achieved a breakthrough with its technology for innovative urban farming, which is now used in a commercial production location in Amsterdam.

This way, fresh vegetables can be grown in close proximity to the consumer, without use of chemical crop protection. An area of two football pitches can produce enough to supply a city of 100,000 inhabitants with 200 grams of vegetables per person each day. 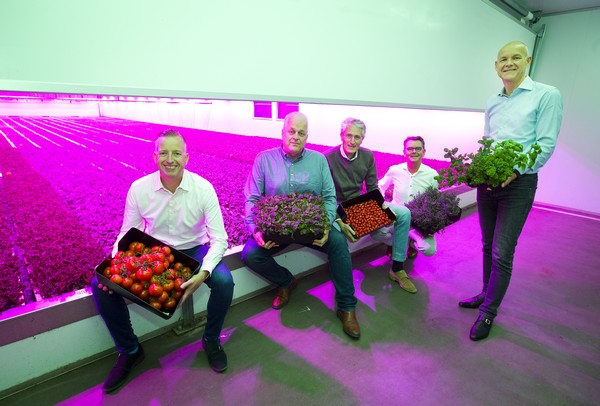 Innovative solutions
“This investment allows us to open more production locations and to further perfect our technology", says Michiel Peters, CEO of PlantLab. “The global population growth and climate crisis put unprecedented challenges to food production. We have to grow our food more sustainably and efficiently, which calls for revolutionary and innovative solutions."

PlantLab's production locations can be anywhere in the world, even on infertile land or in the middle of urban areas. The crops grow to full potential thanks to temperature, irrigation and light control, with 95 percent less water needed.

Light is provided by specially developed LEDs, which give the plant the specific light recipe it needs for photosynthesis. "Our technology makes it possible to produce close to the consumer, anywhere in the world. This means food doesn't have to be transported across long distance anymore, leading to lower CO2 emissions, lower costs and less food waste", Peters says.

Making a difference
De Hoge Dennen is part of the investment company of the De Rijcke family, former owners of Dutch drugstore chain Kruidvat. They've already invested in online supermarket Picnic, salad producer De Menken Keuken and e-bike brand QWIC. CFO Jelle Roodbeen: "We believe that the PlantLab technology will make a difference around the world. Healthy and tasty vegetables are thus becoming affordable and in everyone's reach, and they're produced very sustainably on top of that."

With the investment by De Hoge Dennen, CFO Frank Roerink and CEO Michiel Peters join the management team, which further consists of founders Leon van Duijn, Marcel Kers and John van Gemert. PlantLab has its R&D center in Den Bosch (Netherlands), one of the biggest in the world when it comes to vertical farming, as well as a production location in Amsterdam. PlantLab currently has more than 60 employees.