Certhon has recently started a new research on indoor cultivation of beef tomato in its Innovation Centre in Poeldijk. Rui Yin, Certhon’s R&D engineer and agronomist says: “We have been focusing on different tomato cultivation for at least five years now.” The project was kicked off on the request of a client, based in the Middle East, specifically requested a trial on these tomato varieties.

As there’s a good market potential for beef tomatoes in the GCC, the outcomes will eventually show how big the possibilities are for growing them indoors in year-round production. “The client is aiming to cultivate the tomatoes for local sales, so they can be positioned and branded with the benefits of indoor farming and sold with these added-values.”

Growing cycle
“We need a growing cycle of at least four months. In order for the tomatoes to have a stable production, we need a better picture on the possibilities for year-round growth. The growth cycle depends per variety, as it can vary from four months to two years. Normally, beef tomatoes have a growing cycle of four months, but we can extend that to 10 months. This way we could achieve a higher yield, a more stable production, produce quality and that can be done best with by growing indoors”, Yin notes.

After the construction of the Innovation Centre, Certhon did not directly start growing beef tomatoes, but has done trials with different cherry tomatoes, round tomatoes and cocktail tomatoes. Yin continues: “We did at least five cycles of indoor tomato cultivation of different varieties already.” 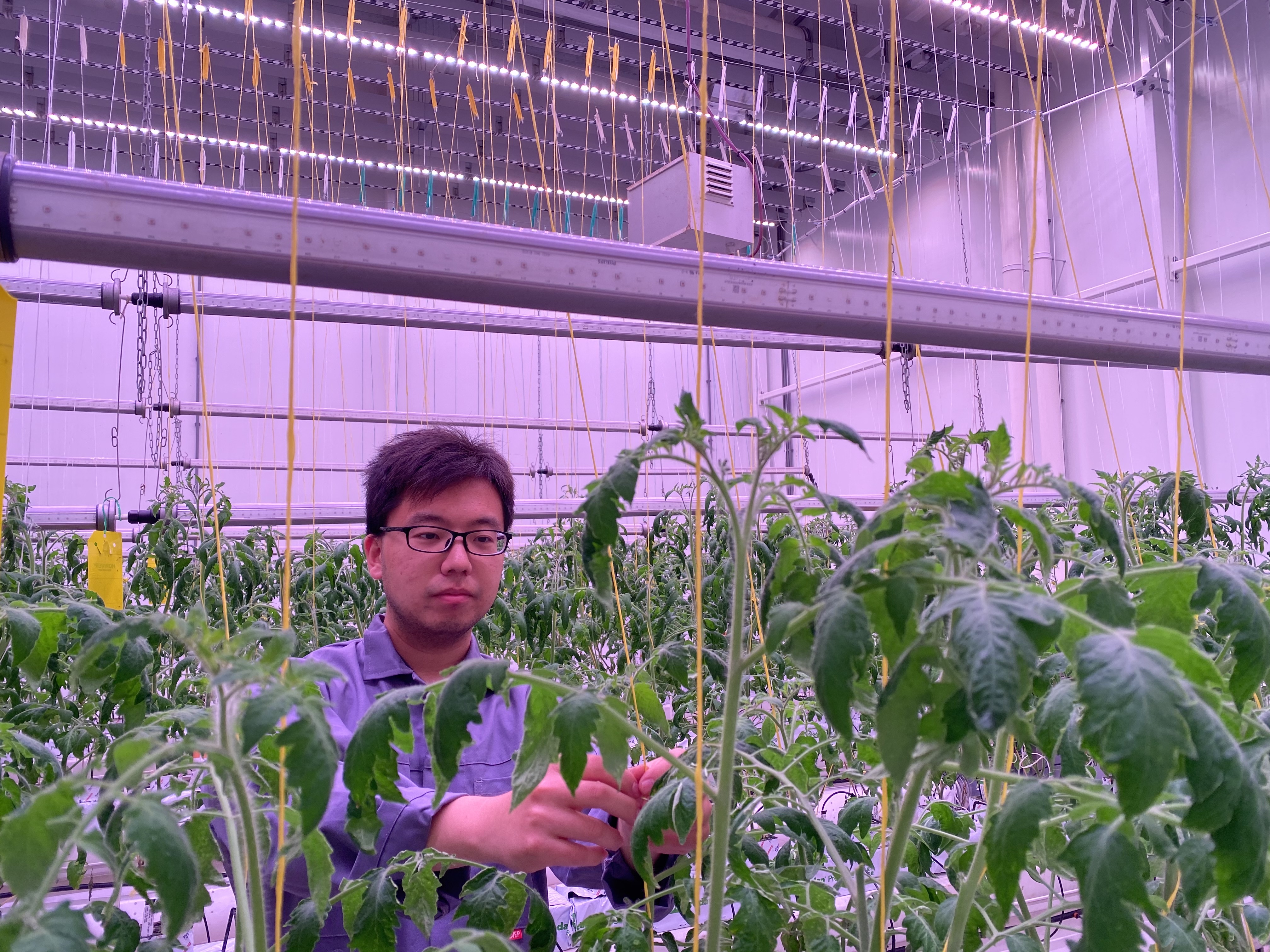 Interlighting
Interlighting and top lighting are used, to better control the macroclimates. “Interlighting is also popular among European growers, because growers are lacking light during the winter period. It’s is mostly used for two reasons. One, to increase the photosynthesis for the crops and by adjusting the light interception structure in this way. Secondly, to improve the microclimate as more heat is brought to the crops, which will boost the air movement within the canopy.”

“The expected final yield per m2 of the beef tomato trial is yet unknown. We are testing how to achieve the maximal potential yield for specific varieties. It really differs per genotype as they all have a different responding cultivation strategy. Therefore, we have tried many different varieties so far from several breeders to see which cultivars are most suitable for the indoor growing circumstances we selected. According to Yin, an indoor principle is that you can fully re-use the water. As water is scarce in the GCC, indoor growing is the best solution as it has a lower transpiration rate and a higher water efficiency”, he affirms.

Certhon is offering complete agronomic support during the trials and offers growth solutions for their projects. The company focuses on offering the complete solution, from the starting point with agronomical guidance included.

All the cultivars tested are mostly designed for greenhouses and not 100% suitable for growing indoors. Because we are using different light such. Indoor we don’t have UV light, but high red and far red ratio lights. That’s the major difference to the sunlight outside and affects the growth response of the crops

Yin has faced several challenges at the beginning of the project:
1.      Breeding: how to select the right cultivar or the right genotype to grow indoor. We need specialized cultivar for growing indoors. This will result in better yield, as plants will grow better indoors there is no need for great resistance, a different spectrum used indoors, etc.

2.      Energy consumption: how to make indoor growing profitable and how to balance energy with production. Rui adds: “In my opinion, indoor farms are not suitable everywhere, but especially in difficult climates as China, Singapore,  the Middle East and the Nordics of course where light is abundant.”

He also experienced some advantages during the trial:
1.      Blossom end rot: as big tomatoes have a bigger risk, transport and climate control can quickly cause this symptom. When growing indoors, it can be kept at a very low ratio.

2.      Food safety: biological pest control, which is used indoors, makes it safer and easier to control many diseases and pests and limits the virus in many ways. Bumblebees are used for pollination. Therefore, it becomes a safe production.

‘Perfect growing conditions’
“We are doing quite similar things to normal greenhouses, but we can make an more optimal and constant environment for the crops. In greenhouses, they can set the setting points, but the temperature, the humidity, wind speed and so on are always changes. Growing indoors will help you to make it perfectly and constant, every day. In terms of temperature, the most suitable temperature is calculated by the optimal photosynthesis”, Yin affirms.