"people are immediately enthusiastic when they see it"

He, partly joking, calls himself ‘a born and raised’ city dweller from the

heart of Amsterdam: Olivier Kappetein. As a representative of Mexican vertical farming company Verde Compacto in Europe, this is not ideal; will people be willing to listen to him given his background and his not yet widely undisputed product?

"Unfortunately not always, but that is why I’m looking for partners to start showrooms within Europe where we can display our cultivation systems. If people could actually see what we do, they would also see the potential in it. Of this, I’m sure. And yes, I know very well that vertical farming is not the solution to the global food problem, but I do believe there are many situations in which our systems would come in handy.” 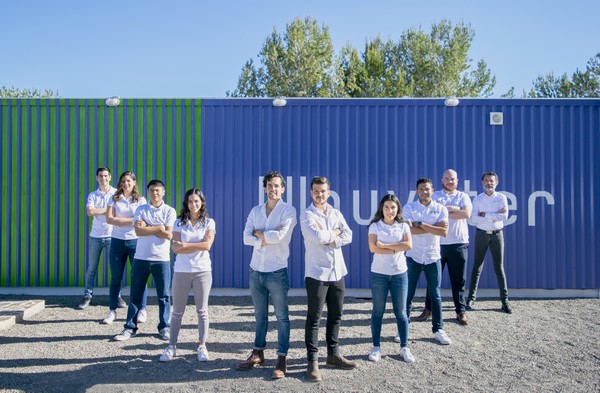 Advancing a Mexican family-run company
Before going further into the systems (such as the cultivation containers), we need to go back to where it all began. How does a young man from Amsterdam end up at a Mexican company active in vertical farming? “I was introduced to a Mexican through my dad a few years ago. It turns out he worked at Verde Compacto where he developed fertilizers. Through those fertilizers, they came into contact with vertical farming and decided to continue in that field.

I went to Mexico myself and got to know the family-run business better. They are ambitious and want to expand their brand in Europe and were looking for someone who could help them with that. With my degree in Business Administration, I can take on that role, and after doing my research to understand the relatively young market better, I now want to take some real steps forward.”

Opportunities, among others for apocalyptic bunkers
In the beginning, Olivier planned to aim all of his efforts in the Netherlands at first, but due to, among other things, the coronavirus, getting to know the market better, and the reservations against vertical farming in the Netherlands, he had to look in other places as well. “I want to build a couple of showrooms where people can see our products both in the Netherlands and in other European countries. We make cultivation systems in various sizes, from container to fridge-sized systems, always according to the vertical farming principle with a high productivity per square meter of 253 kilograms. I see a potential for these systems in, for example, Scandinavia, Germany, and the United Kingdom, countries with large urban areas or difficult growing climates. The younger generations in those places have a demand for sustainable, local products.”

But Olivier also has his eyes set outside of Europe, like in the Middle East. He is also looking into bunkers. Actual bunkers. “It is currently trendy for rich people worldwide to build apocalypse bunkers out of fear for the end of the world. Those people want to be self-sufficient in those bunkers, which is where our systems come into play. A great niche market with requests from the United States, Australia, and New Zealand, to name a few.” 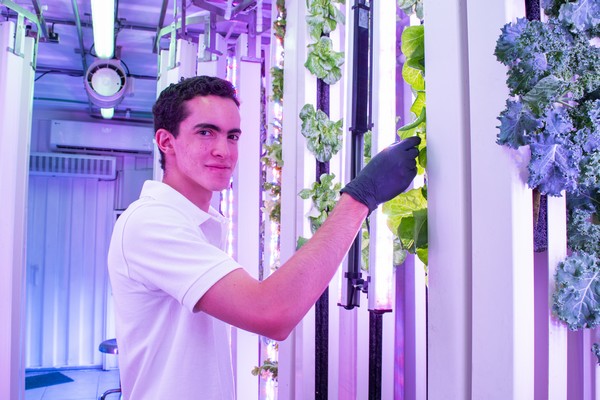 Realistic due to size
In any case, Olivier is a realist: replacing large, traditional cultivation companies with vertical farms in whatever way can not be justified anywhere. “To give you an indication of our system size: recently, we started working together with The Goat Project, an Italian vertical farming project. Up to an investment amount of 30 million euros, we will be delivering together, but after that, they take on everything up to an investment amount of 3 billion euros.”

That is why Olivier aims first and foremost on restaurants and supermarkets, where the consumer can choose how the product they will eat is grown. But, the systems can just as well be used for ornamental cultivation or cannabis cultivation, both medical and recreational. “For that latter type of cultivation, we developed a specialized system which could also be used to cultivate tomatoes, though on such a small scale that would not be very profitable.”

Strawberry yogurt
However, it would be profitable for an Icelandic producer of strawberry yogurt. Importing fresh strawberries to the island is more expensive than growing them yourself in a vertical farm. “The energy comes from the earth in Iceland due to the geysers, but there are many more situations in which, with a bit of thinking and using the local circumstances, a generally more expensive system works. The ROI of our systems is about one to three years, with a very high productivity per square meter (5700 plants in a 12-meter container named Huvster), the second-highest for container cultivation on the market.” 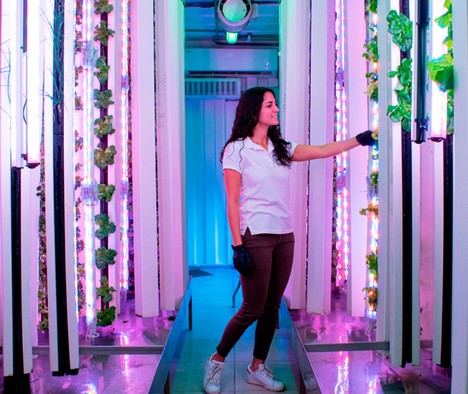 Rotating LED lighting increases energy efficiency
Critics often point out the high energy input of vertical farming. Olivier recognizes that, but refers to the clever use of local circumstances, and the technological innovations developed by Verde Compacto meant to increase efficiency. Rotating lights, for instance, a unique system compared to many other vertical farming systems. “Instead of cultivating in layers, we work with cultivating in standing tubes with LED strips rotating around them so that every plant gets the light it needs, but the energy input in kilowatt-hours is 50% lower per square meter and the production per square meter higher.”

Make them enthusiastic
Back to the restaurants, which is what Olivier focuses on in Europe first. He imagines one of the cultivation containers walls being see-through so that the consumers can take a peek at the cultivation facility. “Especially large groups of young consumers who want to, for instance, eat vegetarian or vegan, I expect will be very enthusiastic, and so will the investors. It is also easier to talk about something if it is physically there and allows fresh and healthy foods to be sourced closer to home.”

However, Olivier is aware of the disadvantage that European supermarkets are not yet able to sell products grown in vertical farms under an organic quality mark. According to him, that hampers the growth of vertical farming. “At the moment, they lose their organic quality mark as soon as they cultivate on water because the standards are pretty outdated when compared to the technological cultivation developments.”

Win-win situation
But it is not an insurmountable problem, especially given the worldwide increase in demand for local products during the pandemic. But is this true given the fact that Verde Compacto is Mexican, and in the Netherlands, many well-known players are active in offering cultivation solutions? “I don’t think that matters all too much these days. Price-wise we don’t differ much from European or North American systems. Every system has its pros and cons. I am very open about that. A well-thought-out calculation is always required, but both parties can create a win-win situation when it happens. Of this, I, and hopefully my future partners as well, am sure. I'm looking forward to discussing it with them.”