After careful research led by Richard Kaima, a land economics student at the University of Nairobi, a group of 10 other students saw an opportunity to start supplying vegetables and fruits to supermarkets and hotels in Nakuru. Forced to be creative due to space limitation, they embraced an economical farming idea dubbed ‘multi-storey farming technology’.

“We researched on the Internet about multi-storey farming technology and were impressed by what it offered. Maximum yields under limited space,” says Kiama. “This technology allowed us to produce maximum crop yields on a 50 by 100 plot. We were inspired to go this way after interacting with a farmer we met who was supplying fresh traditional vegetables in one of the leading supermarkets in Nakuru. He hinted to us that he could not meet the current orders from supermarkets.” 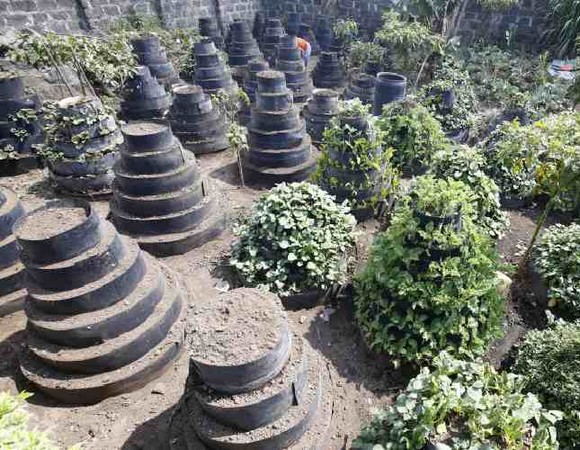 The group pooled together resources and raised Sh150,000 (€1,200) from their personal savings and donation from their parents. One parent offered them a plot they farm on. Of course, before they ventured out, they approached some supermarkets and made inquiries on whether they would be interested in fresh produce. They secured some orders.

“Many farmers make the mistake of venturing out and they have no clue where they will sell the produce. In our research, we learnt the importance of securing a market first before venturing out,” says Kiama.

With a market guaranteed, they set up five gardens which they have now increased to 100 gardens with vegetables and fruits. In their 100 gardens, they grow spinach, kales, capsicum, amaranth and coriander. They also grow strawberry fruits and harvest these twice a week.

To supplement their income, they also install gardens for individuals eyeing urban farming.