'Art and design with culture and the environment: perfect success recipe for vertical farming'

The growing container concept, made by Julian Lwin, CEO of Lwindesign, is based on scalable modular design principles of expansion and contraction. “The project is at its inception stage and is seeking partners for development, technology, funding and manufacture.

The origin
“We will design and fabricate an initial prototype locally here in Brooklyn NYC and exhibit it to generate feedback and collaboration. The future is vertical. The purpose of combining fundamental design principles such as empathy, color psychology and visceral tactile interaction allows a developing human bond and lasting connection to the project - from source to kitchen table,” says Julian. 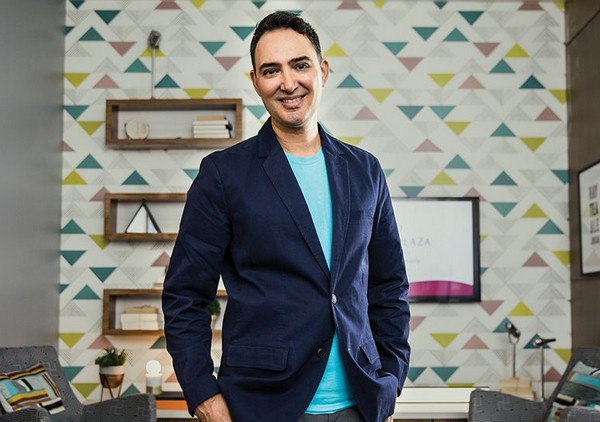 “I believe that art and design when combined with a culturally and environmentally important project, such as vertical farming, is a recipe for success." The simple spatial geometry and architectural design pays tribute to Charles and Ray Eames along with Piet Mondrian, Ellsworth Kelly, Donald Judd and Dan Flavin. "The design aesthetics of the Color Farm allow it to blend in to any environment from school, library, restaurant to home and office spaces," Julian adds.

Colored surfaces
“The colored surfaces act as an emotional catalyst embracing a physiological and psychological relationship with the project,” Julian explains. The colors reflect various hues of energy and engagement. The integrated frame lighting system would be full spectrum LEDs necessary for productivity and healthy growth. 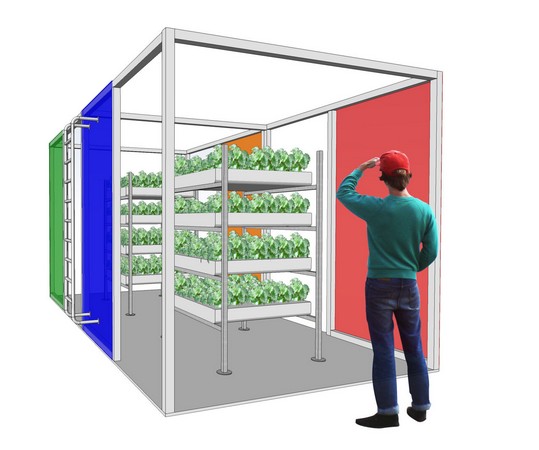 The container farm concept by Lwindesign

Choice of material
The Color Farm materials are chosen for their impact within a Circular Design system with attention to ethics, economics and the environment. "This is based on William McDonoaugh’s “Cradle to Cradle” and circular economics thinking. “Sustainability is the goal!,” Julian claims.

The materials, such as the 3M DICHROIC glass, 3Form Chroma glass and 3Form pressed glass, are chosen for their alluring qualities. Julian explains that they immediately connote contemporary design. "Which is one of the ways to promote a new way of integrating the vertical farm movement into the domestic landscape embedding it into our culture as spatial “furniture” think Herman Miller, IKEA or Design Within Reach. Domestic vertical farms will be as commonplace as bookshelves." 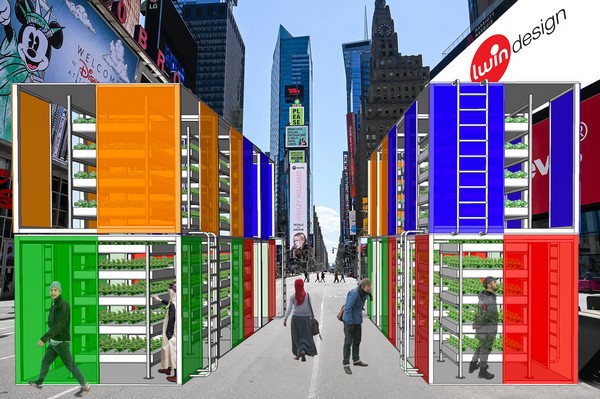 Future development
Ideally, says Julian, this will be developed for diverse spaces such as transit hubs, restaurants, retail, libraries, anywhere really. "The goal is to create a new design typology design to be as ubiquitous as bathroom and kitchen fixtures. Julians ultimate goal is to design and integrate components of vertical farm systems into all existing and new architectural projects so that everyone will becomes a producer. 'Vertical farm principles and practice will become a part of  “everyday” life and an evolution of our cultural and domestic landscapes," he adds.