Mario from New Age Provisions Farms left his 9-5 to start his own container farming company. It hasn’t always been easy, but Mario loves his new independent lifestyle.

The team with Freight Farms recently sat down for a chat with what they call an amazing Freight Farmer–Mario Vitalis! Mario’s journey to start farming wasn’t the smoothest, but Mario applied his incredible work effort, perseverance, and general positive attitude towards launching New Age Provisions Farms in August 2020. All the hard work paid off–Mario is already expecting to receive his second Greenery container farm in December 2020!

Be Your Own Boss
Before August, Mario had no experience with farming. He spent the majority of his professional life in the business and corporate world, getting his first taste of freedom when he decided to go into real estate as a side business. That side business showed Mario the huge potential that he could have as an entrepreneur. It was in an effort to expand his real estate business by monetizing empty lots that Mario first stumbled upon container farming.

Originally, Mario was thinking of using the lots for container homes, but the regulations around residential projects were far too complicated. With agriculture, however, Mario found that there was a much greater opportunity. Today, Mario has left his corporate job to pursue farming and real estate full time and he loves it.

“Farming allows me to be my own boss. One thing I’ve always wanted to do is own a business. That is what will set you apart from being a thousandaire to a millionaire.”

In order to understand the indoor farming industry better, Mario enrolled in an online course of hydroponics which gave him the basics of the farming process. He then started doing some research about the available technology, eventually choosing the Freight Farms Greenery as the container farm that was the easiest to use and produced the greatest yields. Mario signed a purchase agreement the same day that he saw the Greenery, knowing that it was the right technology for his plans.

But before he could start, Mario had to overcome a few hurdles.

Container Farm Financing
The first was financing. In August 2019, Mario applied to the USDA Farm Service Agency for a $50,000 loan to put down a deposit for the Greenery, with plans to supplement the rest with a private loan. In spite of providing the Agency with a thorough and well-reasoned business plan and yield projection, he was informed that the application was ‘incomplete’, and in December 2019 was denied without any explanation. Mario was shocked–in his eyes, the application had been bulletproof.

It was only after a great deal of prodding that Mario was able to get some clarity into his denial. Due to a lack of experience with hydroponic container farming, the FSA had re-run all of Mario’s calculations within the scope of traditional linear farming and determined that he could not possibly reach the yields–and therefore the profit that he was projecting. This, plus Mario’s lack of farming experience earned him a denial.

Initially, Mario was devastated. When he turned to his family for support, he received some pivotal words of wisdom from his grandfather: “They don’t want you to own the land. They want you to work the land.” Mario’s grandfather was referring to the huge dearth of Black farmers in America–only 2% of the national farming population–which is a direct result of long standing discrimination within organizations like the USDA that makes it difficult for minority farmers to receive crucial financing. So Mario decided to fight.

The first step was to appeal the decision. Mario wrote a letter to the USDA requesting an appeal, which the USDA denied by backing the original decision. Mario then appealed again, and this time he went to court against the USDA FSA. In court, Freight Farms was able to support all of Mario’s initial claims about the Greenery’s yield potential, allowing Mario to prove without a doubt that his farm was the right candidate for the loan. The judge ruled in Mario’s favor and shortly thereafter, he received a call from the FSA with an offer for the original $50,000 loan. Mario looked at it all and said: 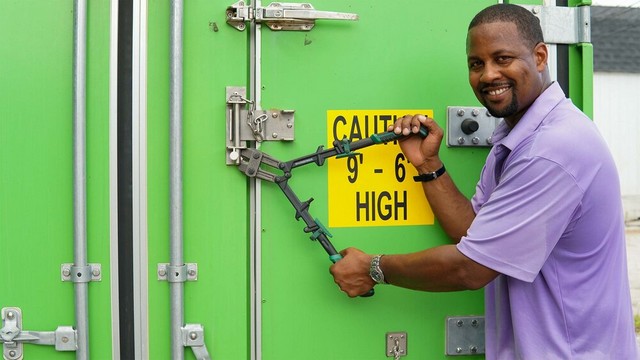 Farm Site & Zoning
With the fight with the USDA behind him and the money in his pocket, Mario turned his attention into getting his business started. This is where he encountered his next hurdle: zoning. Mario initially intended to put his farms on a property he owned, but then found out that the land was zoned residential. As a piece of agricultural machinery, Mario would need to secure a variance (i.e. an exception) from the municipality–a long and expensive process. This time, instead of fighting, Mario turned his resourcefulness towards his personal network. He reconnected with a friend from high school who owned a used car lot and offered it as a place for Mario to keep his farm.

Farm Business Plan & Customers
Unfortunately, Mario’s trials were not quite over. Just as Mario was finalizing all of his financing and zoning, the COVID-19 pandemic struck, effectively turning Mario’s original business plan on its head. Mario had originally planned to sell to restaurants in the area, but as the local establishments shuttered, he was forced to pivot quickly. He found his footing with an online marketplace called Market Wagon, which aggregates dozens of local farmers and craftsmen on one platform. For the shopper, it’s a simple way to shop from multiple small local businesses on one platform–for the businesses it’s great exposure and easy logistics.

“The Greenery allows you more flexibility, more longevity…it’s fresher, it looks great… and it tastes great! It hits all five senses.”

Since Mario’s first harvest in August, Market Wagon has brought a steady stream of success. In using the platform, he’s been able to fine tune his crop menu to the best sellers (lettuce and basil) and to find the right price point. He’s also able to leverage the Greenery to his advantage, reacting faster to market changes than his competitors. The most recent example was a November 2020 outbreak of E.coli in the romaine lettuce supply–within a week Mario already had romaine seedlings in production.

Plus, the shoppers love Mario’s greens, recognizing it as a superior product that’s worth a higher price point.

“You grow art…
…if [customers] want regular vegetables, [they] can go to a store. What you’re growing here is artisan.”

Hydroponic Cannabis
Mario also grows a variety of experimental crops, including tomatoes, strawberries, and… cannabis! In 2020, Mario became the first Freight Farmer to grow commercial cannabis in our container farms. His growing operations are strictly monitored in accordance with the 2018 Farm Bill, which mandates that his plants have a THC level at or below 0.3%. Mario uses clones to ensure he only gets female (flowering) plants, which grow about 12 inches high at maturity and produce 7-10 grams of flower each.

While the cannabis market is still young in Indianapolis, Mario sees it as a huge business potential as medical and recreational marijuana becomes more common. Although he’s only just starting to experiment with the cannabis crop, he’s excited to use the Greenery’s intricate climate control settings to adjust the taste, smell, color, and potency. He believes this will allow him to stand out in the market as a premium product that is fresher and completely safe from pesticide exposure. 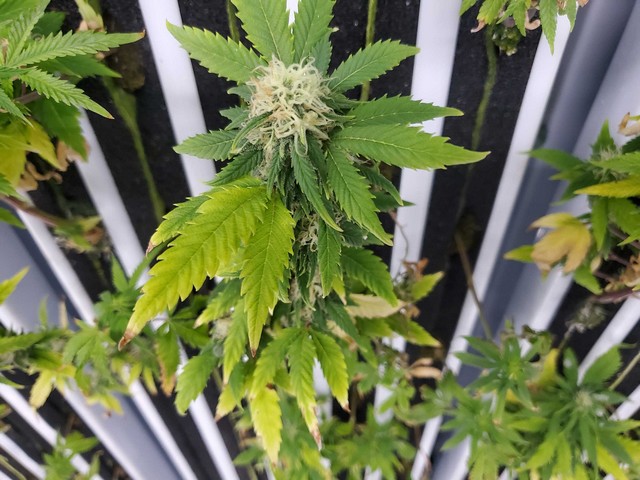 Connecting the past with the future
While there have been challenges along the way, Mario loves his new Freight Farmer lifestyle. His container is a second home–complete with armchairs and a TV–and a symbol of his independence and success in overcoming the odds. With personal mantras like “never give up”, “live life to the fullest”, and “against all odds”, Mario is not only a great inspiration for the future, but also a testimony about how we can overcome our past.

“I’ve always known the city life… but there’s always been a desire to get back to, and discover, my roots.”

Mario speaks candidly about a life and family history full of adversity. He is able to trace his family lineage all the way back to West Africa: his great-great-grandparents were Southern slaves, his great-grandparents were sharecroppers who escaped the south in the 1930s to come to San Francisco. So, in many ways, farming has allowed Mario to reconnect with his past, and to redefine what it means to be a Black farmer for his young daughters and other members of this community.

“Having this type of farm allows me to connect to a history that I have forgotten. I am a descendent of the slaves… this farm enables me to... get back to the type of living where our people once lived off the land.”

As Mario awaits the arrival of his second farm, he’s beyond excited about growing his business. Not only does he see it as a crucial step in developing his own business, but he wants to maximize his impact in his community. With few grocery stores and little access to fresh food, Mario’s neighborhood is one of many food deserts that exist in cities around the country. He hopes to help change the community from within with an infusion of healthy and affordable produce. You can follow along with Mario through his website, Facebook, and Instagram.