Spirulina, algae packed with protein and hailed as a superfood, will make a six-month trip to space in 2021 to test its suitability as a bountiful and nutritious crop for astronauts on long-term space missions.

The UF/IFAS Settles Lab identifies crops and growth systems that are suitable for space flight and provide biological life support to astronauts. Spirulina is their most recent test subject.

Algae from a previous space mission floating in space. “Algae that we previously grew in space grew great, but it has this background level of mutation,” said Mark Settles, UF/IFAS horticultural sciences professor. “Our goal is to grow spirulina in space for six months to see if it remains stable. We want to see if anything will happen in terms of stress to the crop that impacts its ability to be a stable and healthy nutritious item for astronauts.” 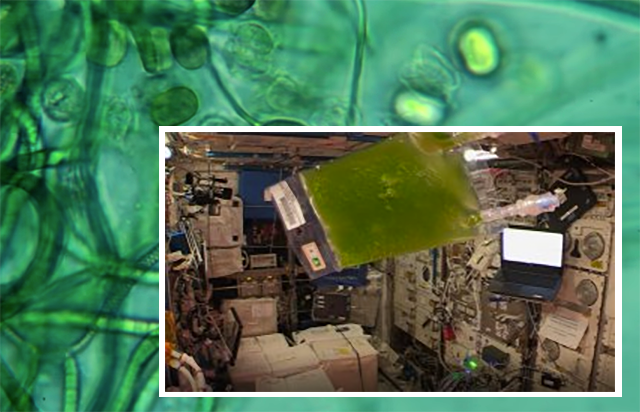 Sometimes, the space environment can cause crops to mutate. Radiation, microgravity or volatiles in the spacecraft are all factors that can impact how photosynthetic organisms like spirulina grow in space. For example, spirulina could produce weird metabolites or develop a different nutritional composition, Settles said. These mutations can cause spirulina to stop growing or make it less healthy for humans to consume. Astronauts are not going to eat the spirulina right now, just grow it under a quick and easy method inside the spacecraft.

“There could be other factors or some combination thereof that caused these mutations in our prior International Space Station experiment, that is what we are trying to identify,” Settles said. “Previous research shows spirulina is more radiation resistant than the other algae we tested, and we want to see if it shows a nice even, expected and predictable growth.”

Selectively breeding foods for human consumption is a regular part of the food production process. When plant breeders develop a new fruit or vegetable species for consumption, some of these crops can produce toxins that would be unhealthy for humans to consume and the scientists breed those traits out to produce a safe, palatable product. Settles and his team are doing the same work, but specifically applying these principles to spirulina and how it reacts to the space environment.

The three-year project will start in the spring of 2021. Scientists will conduct spirulina research on Earth for six months, then the spirulina will be scheduled for flight where it will grow on the International Space Station for six months. Once it returns, researchers will analyze the collected samples to determine its fitness for growth in space.

“Our hope is that spirulina behaves in space exactly as it does on Earth,” he said. “We hope to see nothing exciting at all.”

The spirulina will grow in culture bags that allow diffusion of cabin air into the growth media. Astronauts will place the bags under a growth light. Every few weeks, the astronauts will transfer some of the algae into new media and take samples for analysis on Earth. The collected samples will allow Settles and his team to test the algae to see if it creates concern about growing for extended periods of time in space.

“One thing I have always been curious about is how to make microorganisms, like spirulina, more palatable,” Settles said. “If we can get algae to grow well, can we shift it to be a more common food? This is curiosity-based research. Once we understand its growth, there come all the practical applications for algae like spirulina. First, for space. But what about our daily foods – an algae flour? We are interested in developing crops that do not detract from quality, provide nutrients and could be less dependent upon large farmland acreage to shift us towards a completely alternate production scheme.”

This project is one of several recent grants recently announced by the NASA Biological and Physical Sciences Division’s Space Biology Program that will advance our understanding of how living systems respond to life in space. Three of 18 announced grants were awarded to UF/IFAS faculty to further research that will support human space exploration.