‘Growing hydroponic hops next to the brewery, using waste streams’

“Breweries are able to differentiate themselves in the competitive beer market through our urban hops farms. Whereas hops normally are delivered in dried pellets, our indoor hydroponic hops farm solution enables us to grow fresh hops next to the brewery,” says Henri Laine, CEO of Redono Oy.

Redono provides a BioFeed solution that enables to produce liquid fertilizers from the breweries sidestreams. Henri continues: “The BioFeed solution glues the urban farming technologies to different industries. In the beginning, we did different types of industries, such as biogas, aquaculture and other bioprocesses, but now there’s a greater focus on the breweries.”

Reusing industrial waste streams
Henri came onto the idea of using industrial side streams as fertilizers by researching different industries, with the possibilities to connect urban farming technologies as a new circular ecosystem. He studied the side streams the industry produces and the water’s nutritional values.

“The nutrient profile from brewery side streams appeared really suitable for urban farming solutions to produce hops, microalgae and leafy greens with vertical farming. Also, the production costs become more effective when we can reuse the industrial side streams as fertilizers, and CO2 directly to the local urban farms, which creates savings,” Henri says. The brewery’s CO2 emissions from their fermentation process could be directed to their local urban hops farm.

Hops as a Service
“As consumers are looking for high-value products in the beer industry, we can offer this through our hops,” Henri says. After harvesting, the fresh hops are put into the brewery’s fermentation tanks, within 48 hours. We’re a farming platform. With our solution, breweries can grow their hops next-door. We’re aiming to grow hops as a service (HAAS) as most Finnish breweries are depending on imported hops from the USA and Germany.

When using fresh hops instead of dried pellets, it makes a huge difference to the beer. Whereas fresh hops can add so much more aroma and flavors to the beer so it basically becomes a completely new beer. Having said that, many breweries are interested in our urban hops solution. In this competitive beer market, breweries can grow fresh high-value hops which will enrich their beers, instead of using dried pellets. 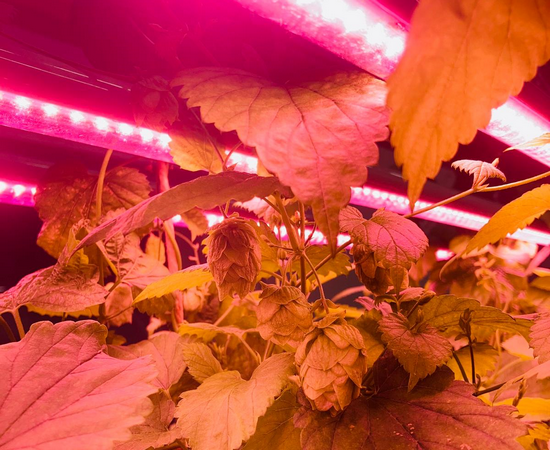 Platform
Most brewers don’t have the knowledge on growing hops, Henri says. “The next phase is to build a commercial urban hops farm. In the first phase, breweries can buy in a growing space in the cultivation area. We will operate the farm, grow hops for partners and deliver fresh ingredients in the end. During this practice, breweries can observe the hop farming and what it takes. So eventually they can construct their own hop farm and grow for themselves.”