Getting into vertical farming: grower spotlight on Andrew Worrall

Andrew is LettUs Grow’s Farm Manager, he manages two of our sites across Bristol and has brought a wealth of knowledge into the company through his previous experience in indoor farming roles across the UK including at Grow Up, Raynor Foods & RootLabs. In this three part interview, we explore what it’s been like to move from animal husbandry to indoor farming, the lessons he’s learned along the way, what it’s like working at LettUs Grow and his advice for those new to indoor growing.

At college I studied an Animal Care Diploma, which led me into working in the animal industry. I worked for a city farm in London for about 3-4 years. I was a part of general maintenance of the farm, animal livestock, giving them their vaccines, making sure they were cared for and also the breeding. I used to breed sheep, goats, chickens and the ducks. We did the full life cycle, breeding, raising and then culling, which we then sold at the Saturday market, on the site of the farm.

I then moved over to a 175 acre farm. I looked after 3000 sheep & some of the rarest pigs in the UK! So I moved from a small city farm, to a big meat-rearing production farm. I lived on site, and my jobs were shearing sheep, looking after the herd, and also looking after the pigs. I really enjoyed it but the reality of dealing with animals for meat in that number really dawned on me. Certain practices weren’t up to my standards after the level of care I had with the animals on the small city farm. I did that for about 5 months, but it wasn’t in me. Wanting to still work with animals, I looked into the petting industry but after a few months it was obvious that I was too emotionally attached to the animals to be able to stay in the animal sector anymore.

How did you move from animal husbandry to indoor farming?
During this time, a start-up company called Grow Up Urban Farms were advertising for Aquaponic Assistants. This was something very new to me, I’d never thought about indoor farming - I’d never even thought about growing plants let alone aquaponics! I was completely a novice at this point. I started working there in 2015 and stayed until 2018, and I moved from being an Assistant, to Technician, then into Operations.

What did you do after Grow Up?
I worked for a sandwich company, Raynor Foods, who asked if I could provide support in their new hydroponic farm, helping them to increase yields and formalise their growing procedures. I did that for 6 months, helping them get settled into the equipment and teaching them how to grow the salad they wanted to grow. Their main focus was cress as their most popular sandwich was egg and cress. This was a good crop to show how quick and efficient indoor farming can be. By the time I left they were getting really good yields on their beds.

I worked very briefly at Growing Underground and also ran a project with Root Labs. I helped them convert a double decker bus to be an aeroponic farm, which grew strawberries on the top deck and was a plant shop on the bottom. It was a short-term project in Elephant & Castle. 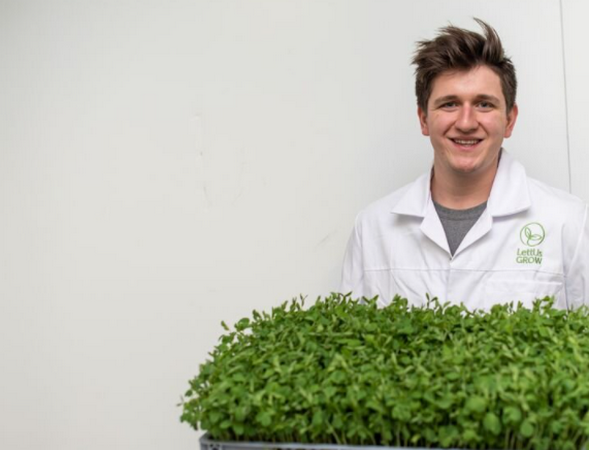 When I saw that LettUs Grow had an opportunity for a Farm Operator, I jumped straight onto that. About a year in, I was promoted to Farm Manager. Now I’m helping run the two sites that have four farms. The farms are run as R&D facilities where we can get our crop data, which is fed into our software and commercial team.

Was it a steep learning curve?
When I first started off, I had to learn the biology around growing the plant & how sensitive they are. In terms of the manual labour, it was about being quick & working efficiently. I learned that through my farming background, with animal farming. It is quite funny that I don’t really know how to grow plants outdoors, only indoors. It’s the opposite of how people normally learn! They normally learn how to grow outdoors in soil, and I only know how to grow on matting or in plugs!

Is there anything that would have helped that be less of a steep learning curve?
Having an experienced grower who has the time to teach you. Then you can gain the skill sets to go from being a passionate small scale grower to running a production farm. I’d also say it’s important to learn in the type of farm you’re going to grow in. Every type of farm is quite unique and every farm is different.

You’ve worked with hydroponics, aquaponics and aeroponics, can you tell me what it’s like to work each of them?
They all couldn’t be more different. Aquaponics to hydroponics is probably the closest linking, because aquaponics requires a hydroponic system but in aquaponics you have two subsystems: an aquaculture room and a hydroponic room. That was the most complicated, it’s very different when you’re working with living animals and living plants, because they have different needs.

Hydroponics is the most simplistic, you’ve got your beds & your control system. It’s very easy to use, but there’s not much to play with. With aeroponics and aquaponics you can do a bit more in terms of the controls. With aeroponics you can control the mist, the depth of the beds, how the roots interact with air, rather than the water. Aeroponics makes a lot of sense to me. People forget how delicate roots are. It’s the starting stage of the plant - without good root culture the plant is going to naturally suffer. The fact that we can aerate our roots & let them grow using gravity, like they do in soil, has a great benefit towards the plant.