While indoor agriculture seeks to circumvent many production barriers of outdoor agriculture, the industry is not without its difficulties. Intelligent Growth Solutions (IGS) has made it its mission to address the most significant barriers to the sustainability of indoor farming by developing a fully integrated indoor growing system that reduces labor, increases LED efficiency and ensures adequate ventilation.

Tackling several obstacles
The first of these obstacles is labor requirement, which is one of the largest operational costs for indoor agriculture. Rather than designing a system that requires numerous employees and scissor lifts, IGS created a system that is fully mechanized and robotic. The optimization of labor is aligned with the company’s “Three Es”: excellence, economics and environment.

As CEO David Farquhar explains, “taking the labor out is important both for economics and the environment. If you don’t have people on the farm, then you’re not bringing pests into the farm and you can be completely biosecure. By eliminating the use of pesticides, IGS’ farms also eliminate the need to wash the crop which increases product shelf life and reduces waste.” 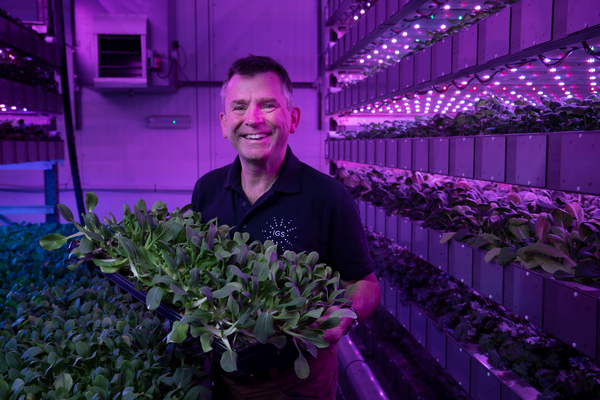 Technique
IGS prides itself on having integrated mechanics, automatic handling and robotics to reduce labor costs and improve plant health. More importantly, the main automation and mechanical handling is IGS’ own technology which has proven itself in various industries and warehouses around the world. Also, IGS’ system is modular and sold in pairs, allowing growers to install farms of various sizes according to their needs. The towers, which contain racks of moveable “Growth Trays”, are sold in pairs as the corridor between two towers facilitates access for the robots. 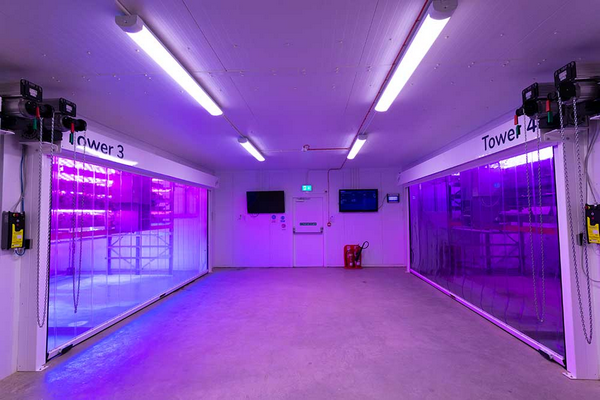 Lighting
Another major obstacle addressed by IGS’ system is the powering of huge numbers of LED lights. According to David, each IGS tower uses roughly 100,000 LED lights of five different colors which represents a significant energy load. The combination of five different colors allows IGS to replicate the behavior of real sunlight rather than simply turning lights on and off.

“Healthy, nutritious crops need to receive real sunlight. You’ve got to be able to replicate the diurnal light range because that is what the plants naturally react to. The sun is not simply white and at night, it is never completely dark. Most growers use fixed spectrum lights, but that is not how nature works and that is not what the crop’s biochemistry responds best to.”

IGS has patented its power delivery method for LED lights, which is reportedly more efficient than other similar lighting solutions and allows growers to recreate light conditions from any region in the world. By optimizing the light recipe, farmers using IGS’ technology can control the taste, color and cooking traits of the products. 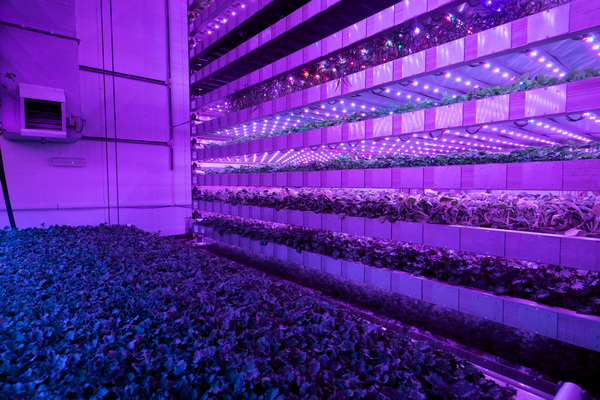 Ventilation systems
The third challenge overcome by IGS’ technology is ventilation. Proper ventilation is essential to managing relative humidity both above the plant and within the canopy. According to David, each IGS growing tower can hold approximately many thousands of plants at a high planting density due to the system’s efficient near-field and background ventilation systems. Near-field ventilation is achieved by running perforated aluminum tubes beneath the growing trays, under which the LEDs are affixed. Cold air is pumped into the aluminum tubes and exits through holes located near LED clusters. The cold air then picks up the excess heat produced by the LEDs and effectively warms the air above the canopy to provide the ideal temperature for crop growth. This air moves slowly over the crop to avoid crop damage while preventing microclimate formation. 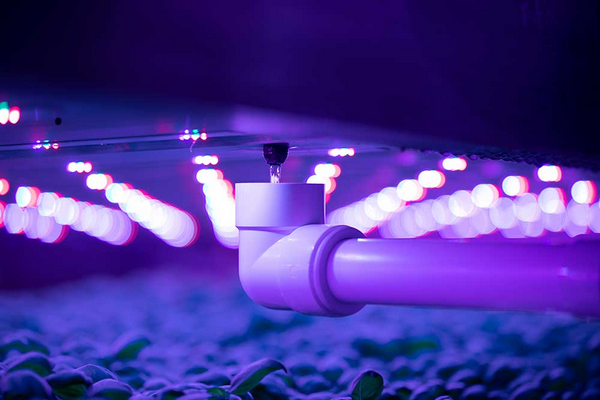 Automation
By combining IGS’ high level of automation and mechanization with innovative LED lighting and ventilation, each tower can accommodate 50 growing trays with different crops in each tray. IGS has successfully grown a wide variety of crops including leafy greens, tomatoes, strawberries, chilies and root crops.

This, according to David, is only possible due to the high level of automation and control achievable in IGS systems. However, IGS itself only grows plant for R&D; the company does not grow crops for commercial sales but are 100% technology providers and works with farmers themselves.

“We are a technology provider, and we don’t think it’s right to go tell other countries what to grow. We want to empower local growers to grow the crops that are really needed where they live. We’re now shipping farms as far as Australia, in Europe, the Middle East, Southeast Asia. We’re working in four continents at the moment,” says David. 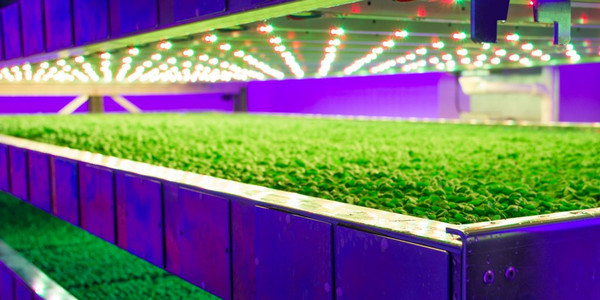 Industry trends
When asked about promising trends within the vertical farming industry, David explained that vertical farming has contributed to this “next generation of agriculture” by enabling farming as a service. By maintaining complete control over the growing environment, vertical agriculture is allowing growers to produce consistent products and, as a result, to negotiate multi-year agreements with supermarkets.

“Agriculture has never been able to provide ‘farming as a service’ before because production was affected by weather conditions. Our system’s precision enables everything to be predicted which gives farmers more negotiation power. It also gives the consumer confidence that they will find what they want at the store. This is a new model for the economics of agriculture. And this is due to our technology being so precise and so predictable," explains David.