Ava and Cooper set up the hydroponic system by themselves, making use of the additional growing lights, nutrient dosers, Rockwool, and water pumps. However, the project wasn't without struggles. At one point, the system turned out to have some leaks and a PCV pipe was disconnected from the system. They later improved the system to remedy the problems. 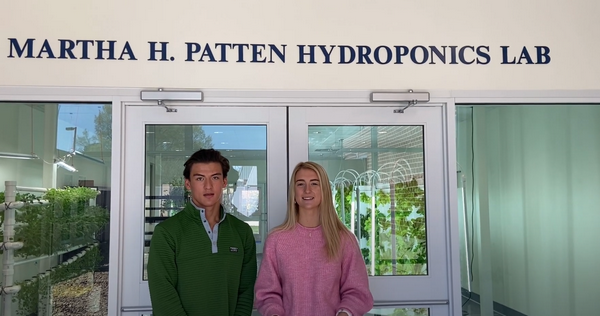 Ava and Cooper at the 'Martha H. Patten Hydroponics Lab

The first harvest was successfully done and enough for 200 salads. Throughout the year, all harvested produce went directly to HRA's school lunches. During their project, Ava and Cooper made it their goal to educate other students at the HRA on hydroponic farming. After a while, many students had expressed their interest in the hydroponic lab. Given that response, the seniors held information sessions to teach students how they could get involved.

Ava and Cooper have said to be thankful for the opportunity to create a hydroponic lab for the school. Their main goal to keep educate and inspire others to create their own hydroponic system as they see it as 'the future of sustainable farming.'

Click on the video below to see the complete story.