The ten Olympus towers will produce 60,000 lbs. of fresh Grōv HDN sprouted grain per day, year-round. As configured, the new feed center to be constructed on approximately one-third of an acre will produce the equivalent of 350 to 500 acres of field-grown fodder using less than five percent of the water. 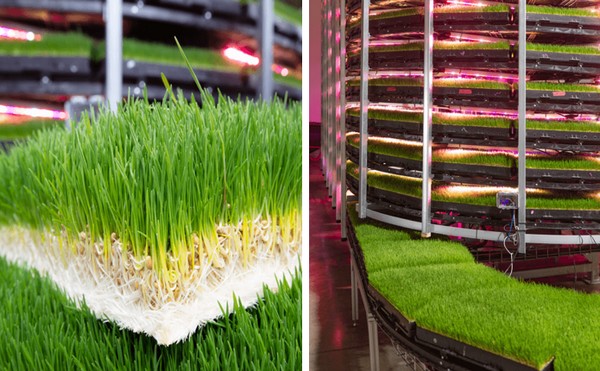 "Installing the Olympus Tower Farm is just one of many steps I'm taking to improve the predictability and sustainability of our farm," said AJ De Jager. "Several weeks ago, Colorado was hit with one of the most severe storms in history, with over 30 inches of snow and 60 mph winds. We are also one of the highest hail-storm regions in the county which can wipe out our field-grown feed in one storm. Having indoor, fresh, and sustainable feed will help mitigate these disruptions as climates continue to change in North America and around the world."

The new Grōv-Hunter Ridge feed center will give local dairy operators first-hand knowledge of the impact Grōv's technologies can have on advancing towards the industry's goal of becoming Net-Zero carbon emitters by 2050.

"AJ is a dairy innovator and we are thrilled to have him join the Grōv team as an advisor. He will bring us a wealth of experience and expertise as we continue to develop technologies that will improve animal health, raise production, produce higher quality dairy products, and increase profits for operators," said Steve Lindsley, President of Grōv Technologies. Since the debut of Olympus Tower last year, we have seen an increased demand and the Grōv-Hunter Ridge facility is the first of many to come this year."

AJ De Jager, who will be joining Grōv Technologies as a senior advisor, is a fourth-generation dairyman from Central California. De Jager established the Hunter Ridge Dairy in Ault, Colorado seven years ago and now manages over 4,000 milking cows. The Hunter Ridge Dairy is one of 74 dairies in Weld County, which has become the 17th largest dairy region in the U.S. with over 70,000 dairy cows. The high plains of Colorado offer an ideal climate for dairy farms, but they face growing threats from changing climates and rising costs of land and water due to population growth.