Lill's passion for farming and Carl's passion for cooking together became the starting shot for their company Cubegreens. The vision is to, through cultivation in a small area, increase the supply of sustainable and locally produced vegetables that help people to make healthier choices, while at the same time contributing to a climate-neutral world.

During their studies, Carl and Lill worked a lot together. They wrote both bachelor's and master's theses together, as they liked to collaborate and could contribute to each other's ideas. After their studies, they got married and the dream of running something together took off. They explored many business ideas but eventually fell for urban cultivation. In the autumn of 2018, Cubegreens was started based on their passions in life. Lill's passion for farming, which stems from her upbringing in Gotland with access to locally grown ingredients and Carl's passion for cooking and jealousy of the professional chefs' access to tasty ingredients all year round, became the foundations for Cubegreens.

In the spring of 2019, they started up their first cultivation module, a rebuilt 40-foot freight container in which they can produce enough lettuce, kale and herbs to provide 100 families with an area of ​​only 30 square meters. By cultivating with the help of hydroponics and LED lights, they can provide the city with a tasty harvest all year round, regardless of weather conditions and long-distance transport. 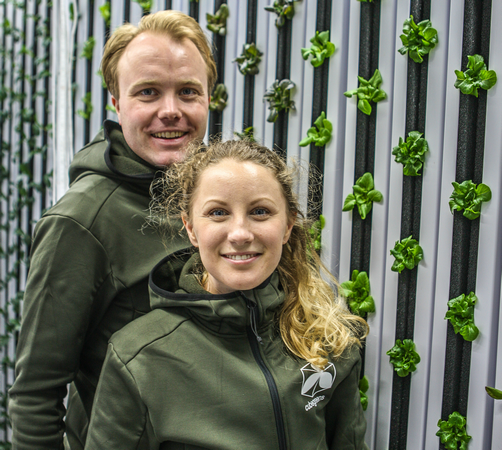 What challenges have you encountered?
Life as an entrepreneur largely consists of solving various problems and as someone said, the value of your company is the value of all the problems you solve, says Carl. For us, it has been a long journey where two office economists have had to completely re-saddle to learn to grow professionally and understand all the underlying technology that drives our production.

In urban cultivation, it is important to understand that technology is only an aid, while cultivation itself is a thousand-year-old phenomenon. A plant can suffer from a number of different problems that also correlate with each other, so it is really important to become a good and observant grower, something that has taken us several years and many failures to understand, Carl continues.

As always with different problems, you are rarely alone about them, which is why we spend a lot of time reading and getting to know what we are doing to constantly get better. "A Friday night with us can consist of everything from looking for interesting seeds, understanding the optimal pH value for lettuce, or rebuilding parts of our cultivation. With curiosity and a drive to constantly want to get better, most problems seem to be solved."

How have we at Almi been able to support you?
Almi has been on our business trip from day one and has helped us with both financing and many wise advice and surveys. Almi quickly granted us a microloan, which we may not have really understood the meaning of at first. In retrospect, however, we have realized that that loan was absolutely crucial for us to have a sufficiently liquid buffer, as the costs always come on day one and the income is much later than first expected.

In addition to the microloan, we have on several occasions met Almi to get tips and advice on how we can grow our company further and we also get to take part in very useful information via newsletters and various invitations.

What will happen to you in the future?
Like many other companies, we have also been affected by the current pandemic and it feels as if we have changed business model countless times during the past year. We are still evaluating which model suits Cubegreen's and our growth journey ahead, but the goal is of course to give more people access to hyperlocal grown crops all year round by opening up more growing modules in the city.

What tips do you have for other entrepreneurs?
Start your business based on your passions in life, it will be much more fun then! Be patient and do not stress, sometimes time itself can solve certain problems. Try to have several irons in the fire at the same time around your business idea, as it increases the chances of finding a good way forward. Try to have time to maintain relationships with your customers, suppliers and other social contacts, new paths and spreads often arise where you least expect it.