On May 28, Dean & Deluca Hiroo, a food shop in Hiroo started to sell vegetables grown in an indoor vertical farm.

Infarm introduced the system was introduced to three Kinokuniya shops and two Summit shops in January this year. Dean & Deluca is the first supermarket in Japan to carry the product. 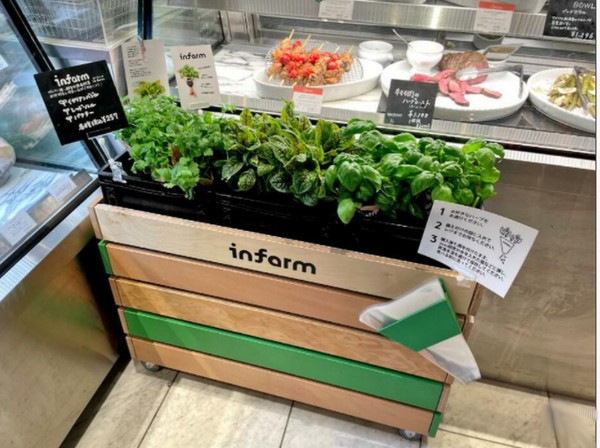 The vegetables are Italian basil, pak choi, red sorrel, and wasabi arugula (257 yen each). They are sold with their roots still attached. Dean & Deluca will replace some of its deli vegetables with those grown on the farm. These include the Lebanese potato salad (562 yen), the pak choi shrimp (702 yen), and the spiced potato salad and hummus sandwich (691 yen). Basil is used in the "Avocado gratin with prawns (shrimp) and basil" (594 yen) and "Edamame hummus" (454 yen, 100 grams each).

This is the first time that a vegetable-based dish has been sold at Kinokuniya and other stores. In Germany and other countries, vegetables harvested in the shop are sometimes used directly for cooking. Now, the company is aiming to introduce the product to restaurants in Japan as well.

Read the complete article (in Japanese) at www.news.yahoo.co.