Smart Farms: Getting to the heart of the matter

Labor costs account for up to 50% of the market price of vegetables, berries, and herbs. However, just like the tractor that once transformed agriculture, the new technological revolution greatly reduces the need for manual, skilled, and specialist labor. Today, the work is done by a team of robots, sensors, artificial intelligence, and a core team of highly skilled professionals who manage hundreds of farms at once using special software. As a result, iFarm witness the “battle for the harvest” moving into the IT domain.

A vertical farm functions as an organism, and its equipment can be compared to human organ systems. Its sensors and senders are the nervous systems, its air conditioners and dehumidifiers act as the respiratory system, while the solution supply pipeline represents the circulatory system. The nutrient mixing unit can be compared to the endocrine system, tray conveyors, and lifts to muscles. Naturally, this organism has a “brain": the Growtune IT platform.

The degree to which the brain can accurately and confidently “take control” determines how ready various systems, nodes, and technologies are to operate without human intervention. Below, the team with iFarm describes all of the techs that lies inside a vertical farm. 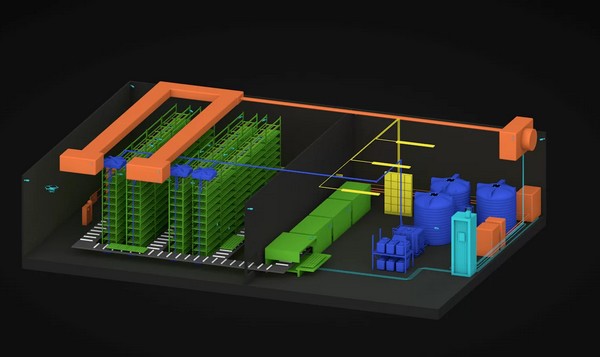 Breathing: ventilation and air conditioning
Let’s remember biology classes. Plants use photosynthesis to turn light, water, and CO2 into oxygen and energy. By doing so, they can consume far more CO2 than is normally present in the air. Since the farm, like a space station, uses a closed-loop air exchange system, with no air inflow from the street, creating an optimal environment and climate for plants is purely an engineering challenge. This includes purifying, conditioning, and adding some CO2 to the room to allow plants to breathe freely and grow intensively.

The farm has multiple air conditioning units. It’s not just a matter of maintaining a certain temperature and humidity. "We need to make sure that the climate is as homogeneous as possible throughout the entire arm, including at different heights. So, instead of one super-powerful unit, we install several medium-sized devices. This provides the right air circulation and creates a failure-proof system."

Hydroponic technologies tend to create a lot of moisture, and the farm air typically needs to be dehumidified. There are times, though, when you need to do the opposite: for example, you may need to humidify the air, especially at the initial stage of starting a farm when you don’t have a lot of plants.

Energy: grow lights
Photosynthesis, which is the conversion of light energy into chemical energy, only occurs when there is light. Agronomists call artificial lighting of plants “supplemental lighting”. It may vary from one area of the farm to another, depending on the crop and its cultivation phase. The light control unit creates “day” and “night” conditions for plants. The most frequent setup resembles a nice summer day: 14–16 hours of light and 8–10 hours of darkness. Darkness is crucial: the night is when cellular respiration occurs and other important processes take place.

Agronomists at pilot farms refine cultivation flow charts. For example, they are currently experimenting with variable brightness to grow pine strawberries: the lamps are equipped with a dimmer so you can gradually add brightness. It seems that the agronomists’ hypothesis holds true—the berry evidently "enjoys" long dawns. Through smooth, incremental changes in lighting, the osmotic pressure in the stem and leaves grows gradually, whereas its surge upon sudden light exposure can have a tissue-damaging effect.

Sometimes you have to focus not only on what the plants need but also on organizational or purely economic factors. For example, the cost of electricity. True, the lamps manufactured and installed in racks are highly energy-efficient: they convert every watt of electricity into 0.6 watts of photosynthetically active radiation (FAR). Still, energy costs make up a large portion of the costs of growing herbs indoors. Automation can (and should) be leveraged to ensure optimal load distribution. 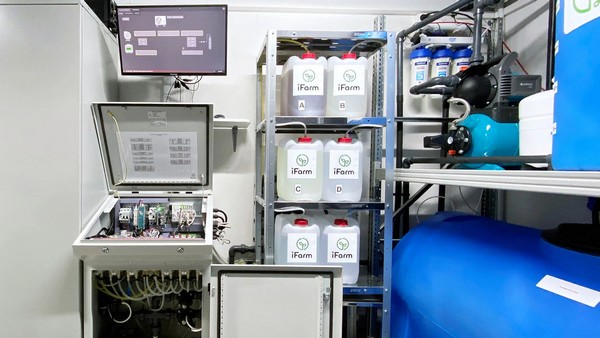 Nutrition: irrigation and nutrient solution supply
The nutrient solution is made from several components stored in individual containers which can easily be replaced. The solution is prepared in the mixing unit, a sophisticated automated system capable of mixing dozens of liters of stock solutions with high precision and in the right proportions.

The nutrient solution is delivered to the roots of the plants through a tube system. Since the specific recipe depends on the type of the plant and its cultivation stage, the system continuously monitors (and sometimes adjusts) the composition of the solution.

The water used for preparing the solution is added to the system after it is properly treated with a reverse osmosis filter. This removes contaminants, such as minerals, heavy metals, bacteria, and viruses, leaving the water virtually pure.

Well-being: IoT sensors
The purity of the source water, the ratio of nutrients in the solution, its acidity, the brightness of the light, the amount of carbon dioxide in the air, temperature, and humidity—you need to control all these things with precision. A large farm can have hundreds of sensors.

Based on sensor measurements, the farm's central processing unit controls the equipment and hardware in real-time, always keeping climatic and biochemical parameters within the limits set by the cultivation flow chart.

If these limits are exceeded, it triggers an alarm and remote technicians are alerted. The algorithm helps identify potential human errors, among other things. For example, it will immediately alert you if a technician incorrectly replaces the cans with the source materials for the solution. 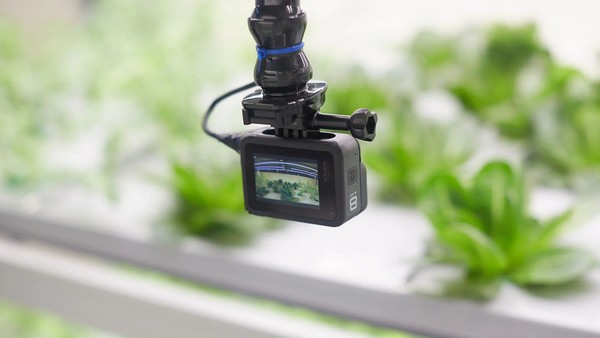 Analytics: computer processing of Big Data
The “head” of the system is a cloud server. It collates and computes data indirectly from the array of actual measurements collected. For example, it calculates the efficiency of air circulation across the farm based on the data from all of the climatic sensors. What’s even more important is the ability of Growtune, the farm management software platform, to process all of the Big Data collected on the farm.

Farms are increasingly using machine vision in their “nervous system”. Images from the cameras installed on the racks are analyzed by a neural network trained to determine if the plants are healthy. Technicians can also use this neural network by uploading a picture of plants through a chatbot to gain critical information about their health. Another neural network calculates the dynamics of herbage mass accumulation using the same stationary video cameras or drone cameras. 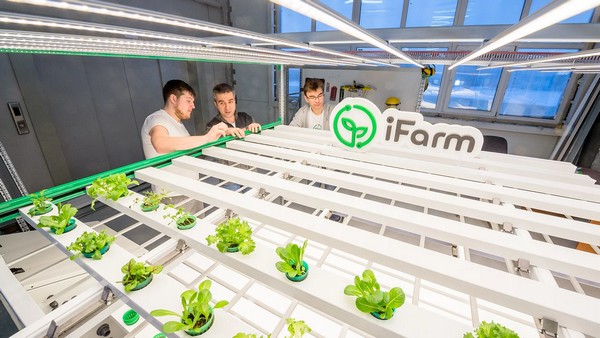 Movement: automation of tray movements
Problems usually dealt with by rare and expensive specialists, agronomists, biochemists, and phytopathologists can be solved using artificial intelligence, special equipment, or remote consultants. But, until recently, there hasn’t been a fully automatic farm where electronics also handle routine manual work, such as moving trays.

In February 2021, iFarm engineers implemented and tested a design prototype of a fully automated vertical farm. It features a conveyor belt that moves trays with pots through the planting, germination, growth, ripening, and cutting areas. The farm can also be equipped with individual robot modules for packaging products and preparing trays for the next cycle.

A human helping hand
As with any sophisticated modern equipment, an automated farm has special service message protocols. Naturally, these protocols are intended for a person, such as an employee of a certified service provider. Automatic warnings about errors, worn-out nodes, or the need for consumables to be replaced translate into assignments for replenishment or troubleshooting. 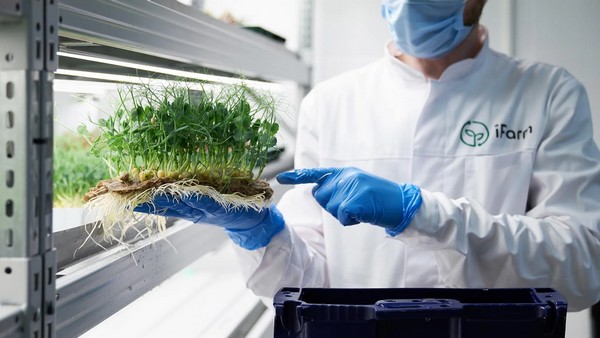 The reports of deviations in the growth of herbs are handled by an iFarm agronomist. The first thing this expert does is double-check that the actual conditions match the ones in the flow chart. They then go through a list of tasks almost identical to the sections of this article. So, what’s happening with the air, climate, energy, and nutrition of the plants on the farm? Do the sensors provide correct data? When suspecting a technical failure, the agronomist connects a service employee to the diagnostic interface with one click. They can also connect to the technician’s camera or AR glasses if the employee is already on site.

“We have several continuous operation circuits, millions of second-by-second measurements, sensors, robots, conveyors, drones, cameras, and neural networks. It seems we’ve automated almost everything we can. The only thing you can’t automate is the R&D process itself. This is why people in the company focus on this process. And this is exactly why we are fighting for strategic investment," says Max Chizhov, CEO of iFarm.