On 1 July, Paul Brabander will bid farewell to technical installation company PB tec. Together with his brother Koen Brabander and later Richard Schmit, Paul built and developed the company into one of the market leaders in providing electrical engineering, water technology, and automation services to the horticultural sector. 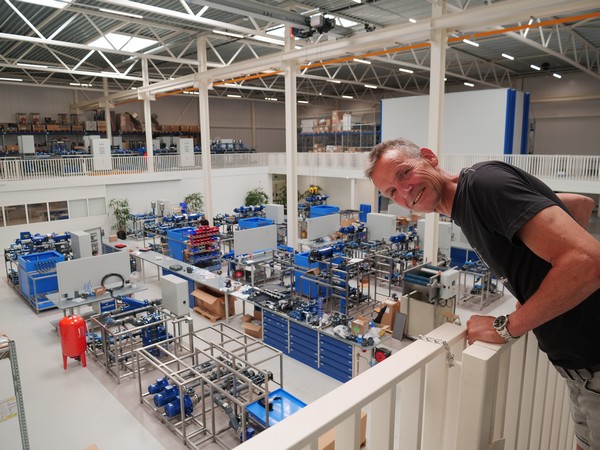 Paul is responsible for technical and operational policy at PB tec. In recent years, PB tec has grown considerably, as have its ambitions. “It’s absolutely incredible for the business. We’ve got good people here, and that’s reflected in our success. However, this growth isn’t in line with my personal ambitions, so I’ve decided it’s time to move on to something else,” says Paul. Paul hasn’t yet revealed what this something else is, but a next step outside the sector is certainly possible. “I am indeed working on something, but I’m still forming ideas about it.”

Paul also mentions some other innovations with enthusiasm: “One of the most amazing devices we made is the liquid fertilization unit. It’s not something used in many companies, but in large-scale horticultural projects. We’re currently working on ultrafiltration, to supplement UV disinfection of water and drainwater disinfection. It’s a water purification method with a high disinfection capacity, which means the water can be reused in cultivation.”

According to Paul, there are a number of developments in horticulture worth following. “Growing in totally closed environments will become much more important in the future. PB tec has already delivered a number of projects in vertical farming and multi-layer systems. I think that systems in which light, temperature, air, water, labor, and internal transport take place in a completely sealed environment are really going to take off.”

In recent months, PB tec has been preparing for Paul's farewell and working together on hiring in new expertise. “With the arrival of Roy van Gaalen and Gerard van Lier, PB tec has added two technical powerhouses. Remko Walta will take over my management duties as Operations Manager. These new powerhouses will strengthen the enthusiastic and close-knit team we’ve been working with for almost 30 years, and of whom I’m extremely proud. I look back with pleasure at what we’ve achieved with the team and our customers. A number of clients deserve particular mention because I’ve worked intensively with them for a long time; Koppert Cress, Royal Pride, Agro Care, RedStar Trading, Ovata, and Bunnik Plants. These customers have relied on us for many years, and their trust is completely mutual."