What is driving the UK’s CEA boom?

“In the UK, fruits and vegetables are quite cheap in comparison to other European countries and other parts of the world. In the UK, the market has been squeezed by supermarkets that squeeze out the margins of the supply chain,” said Andrew Lloud, COO at Intelligent Growth Solutions, during a panel at the Indoor AgTech Innovation Summit.

During the session, three UK-supplier panelists elaborated on the topic. Joining were, Andrew Lloud, COO at IGS, Ben Crowther, Co-founder and CTO at LettUs Grow, Jen Bromley, Head of Plant R&D at Vertical Future, and Oscar Brennecke with Rethink Events who led the conversation.

The main findings of the panel were that the UK has been lucky with its well-established greenhouse industry which offers a great foundation for vertical farmers to understand the CEA space.

However, at the same time, it's quite costly to produce indoors given the high electricity and transport costs. This might change over time, due to several renewable energies coming into the market that will allow for cheaper production. Later on, the panelists will elaborate on the differences between the US and Europe, being monocropping whereas EU farmers grow more different varieties at the same time. 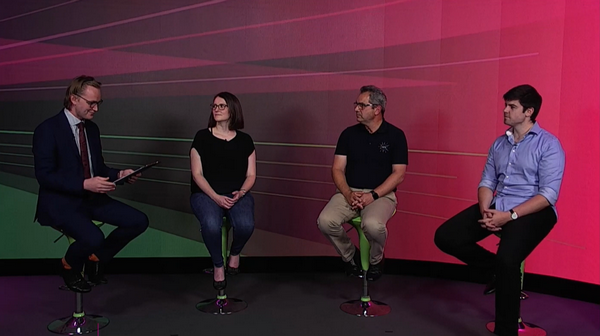 What makes the UK CEA space unique?
Andrew noted that UK consumers are willing to pay a certain price for fruits and vegetables. However, indoor ag bring along high electricity costs, whereas UK transport costs are high as well. Next to that, the economic and political dynamic being post-Brexit and currently battling the pandemic has highlighted its challenges. “Technology can economically viable grow a wide variety of crops, forming part of the food mix in the UK and in other parts of the world.”

73% of the surface area available for farming, said Ben Crowther, Co-Founder and CTO at LettUs Grow, a UK-vertical farming supplier, however, the UK still imports half of the produce.” He claimed that there’s an opportunity to make things more sustainable and efficient. Jen Bromley, Head of Plant R&D at Vertical Future, said that it’s not always about growing at a large scale, but that it differs per crop. “It’s always about pushing boundaries to see where the economics can work for the crop.”

Opportunities
More renewables and power generation are coming in, so there’s the opportunity to drop in things like vertical farms according to Andrew. “The real trick is to see if you can get a tariff from the energy provider so that the price per kw/h consumed is optimized to grow plants in the cheapest way.

Jen added that there are some obvious low-hanging fruits that can be taken within the market. Such as leafy greens, herbs, and fruits, given they work really well with the infrastructure. “However, there are also markets we can go deeper into, such as proteins, high-care products that can all be managed very well in the vertical farming space.”

Andrew added that a wide variety of crops will eventually be important, depending on your location. The difference in the US is that it’s a lot about monocropping, but they don’t tend to have the same diversity as seen in the UK or other European countries. I’ve seen it here, but I expect it to come to America as well.”

UK greenhouse- vs vertical farming market
Ben notes that “because of the well-established UK greenhouse industry, we can better understand the vertical farming market.” Berries are a great example, in the UK there has been a 10% market growth. It drives how people are looking for rootstock in these markets, specifically in greenhouses. As well as looking into year-round growing to complement their off-season. The idea translates into more traditional farmers, looking for a more consistent, lower-risk way to make their business more resilient.

Jen said that a traditional farm is a long-term play as they’re handed down by generations. In a vertical farming system, it’s an infrastructure that has to last. Whereas, Andrew claimed that the seasonal variation will be smoothed out by multi-tenant farmers using the same facility for different crops for different points in the year.

Consumer perception
“On the whole, there’s a growing understanding I think,” says Ben. He explains that there are some products available at various retailers already. Jen noted that branding is far more developed in the US, given the produce brands they have. Whereas Andrew affirmed that the elephant in the room in the UK and Europe is the use of the word organic. In the US, vertically farmed produce can be labeled as organic, however, in Europe, we’re still looking at what post-organic looks like. It’s confusing for the consumers, however, we’re at the beginning of educating people, starting with kids.

Other topics discussed were subsidies and barriers in vertical farming in the UK.