Small Business Minister Paul Scully on  visited a vertical farm in Leyton, East London, to see how technology can help make the food system more sustainable, as the UK prepares to host the UN Climate Change Conference (COP26) in November this year.

The farm is owned by Harvest London, a company aiming to reduce the environmental impact of agriculture by growing vegetables and herbs indoors in a controlled environment. Housed in a converted unit on an industrial estate, the farm uses no pesticides and consumes 95% less water than traditional farming. Produce grown in this way, within a few miles of the end consumer, can replace imported ingredients from thousands of miles away. 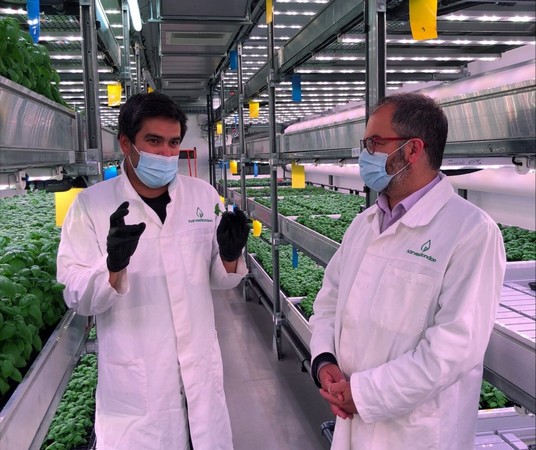 To coincide with the Minister’s visit, Harvest London has signed the SME Climate Commitment*, which the Government is encouraging businesses to join in the run up to COP26. The commitment requires companies to halve their greenhouse gas emissions by 2030, and achieve net zero by 2050, while disclosing progress on an annual basis.

Vertical farm
During his tour of the facility, the Minister was shown how the farm uses vertical farming to maximize growing space by stacking the plants in racks, each level with its own LED lights and irrigation, all powered by renewable energy. He heard how one of the farm’s major customers, Pizza Pilgrims, a chain with 15 restaurants in London and Oxford, switched to Harvest London as their basil supplier after working out they could save 250,000 food miles a year compared to the imported alternative.

Small Business Minister Paul Scully said: “This Government is on a mission to build back better and greener from the pandemic and sustainable businesses like Harvest London will be at the heart of this. “Harvest London is paving the way in reducing emissions right from the farm to the plate, and I congratulate them for going even further by signing up to the SME Climate Commitment, which will allow them to inspire even more businesses to be greener than ever. 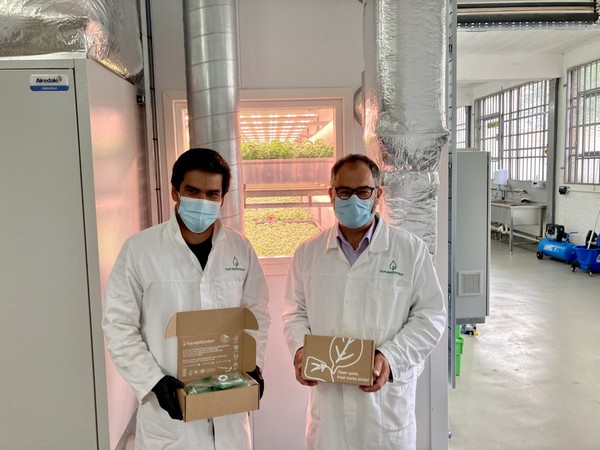 Emission reduction
“I encourage smaller businesses across the country to sign up to the SME Climate Commitment and show their support for creating a greener, cleaner future for our planet.” Chris Davies, Founder and CEO of Harvest London said: “It was great to have the chance to show the Minister the potential vertical farming has to make our food system more sustainable.

“The UK is very reliant on imports of fresh fruits and vegetables, often transported here from the other side of the world. While this is great for consumer choice, it comes at a price. Vertical farming can work alongside Britain’s traditional agriculture sector to produce the food consumers want, while reducing the impact on the environment. This technology can help achieve several of the Government’s goals on emissions reduction and enhancing natural habitats, and we think it’s an opportunity the country should grab with both hands. We’re pleased to be able to sign up to the SME Climate Commitment, because sustainability is at the heart of what Harvest London does."