90% goes into our story and branding now”

"As Spain is suffering more drought problems, we have started to look into renewable energy and sustainable farming. It’s not that dry in the Barcelona area, where we’re based, but we will become a desert within 50 to 80 years from now on,” says Alessandro Calcagno, co-founder of Groots.

Alessandro explains that Spain has a lot of agriculture, however, there was a need for a new alternative. Not in terms of bad access to fresh produce, but in terms of the way it is produced. Especially herbs, as they’re mostly imported from Morocco.

Groots, a vertical farming producer and in-store farm supplier in Barcelona, started in the middle of COVID. After seeing their business model with a focus on restaurants needed a slight twist, the company now delivers to retail. People are currently able to buy produce from Groots’ website and at the main retailers in Spain. Their products are currently to be found at BonPreu, Esclat (which is a total of 200 stores), Veritas (at 100 stores) and Amettler Origen (130 stores).

The team aims to scale as they’re gaining more awareness. About 9 different kinds of herbs and 4 different greens are grown at the Groots production sites. 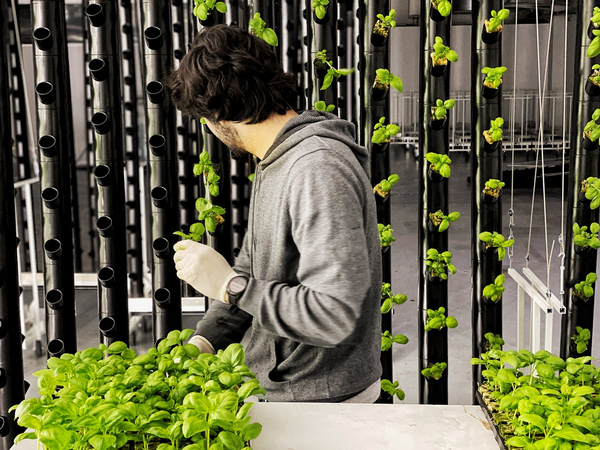 Taking the right approach
Given Groots has been testing their products at stores, lots of feedback was given to improve in several areas and support what was good. “We were trying to find the ins and outs looking at the traditional market, not at other farms.” It’s all about finding a balance between the traditional market and the triggers that make a product sell well. It’s all translated into a new approach, a new story, marketing that vertical farming is more sustainable.

The format hasn’t changed for a long time. It’s all about bringing a new fresh product into the market that people will like. “I think we found good timing. We want to move into salad mixes as there’s a big market opportunity as well. Convenience snacking is a big trend and our next step will be focusing on that as well,” Alessandro adds. 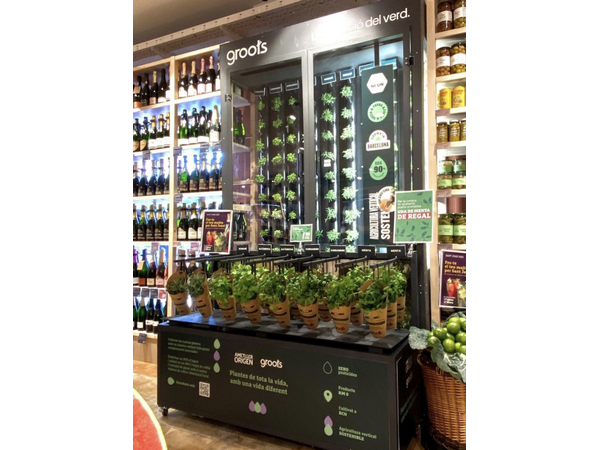 90% branding, 10% farming
According to Alessandro, people don’t seem to care about whether produce is grown on land or in a vertical farm. They don’t know how bad the current state of agriculture is. However, they do care about sustainability much, which is the approach Groots has. “We are trying to explain the positive aspects of farming. As there as so many sustainable ways to farm, it’s difficult to make them understand that suddenly. There are just so many facts behind the process. The first step is exposing the current situation and explaining how we can solve it,” he says.

The Groots products fit very well in cities, Alessandro claims. Groots also sells to closer towns in the area, applying storytelling and branding which is turning it into a more known product. “I think we’re putting 90% of the effort in our story and branding now, because we already have a MVP farm that works. Once we are more settled in the market we will focus again on farming. But getting market traction is key for a vertical farm to survive. Not finding the product-market fit is the main reason of failure in vertical farming,” says Alessandro.

Groots is hoping to expand nationally to keep more control on the supply chain. Later on, their eye is on the international market. “But, we first have to do a good job in Catalonia and Spain,” says Alessandro.

The farm is based in Barbera which is 20km from Barcelona. The cultivation area comprises 250m2 and grows 35.000 plants monthly. Soon, Groots will be expanding into a 2000m2 area to cover the whole Catalonia area. Alessandro notes that the company is in contracts with retailers to expand its reach. As of now, Groots is looking to expand into the Spanish Basque Country and Madrid area as well which will be realized through new funding rounds that will be raised in the upcoming months.

Paper trays
Currently, the company supplies herbs to Barcelona and its surrounding area. Alessandro says they found a segment in the market. Groots wanted to provide a new and fresh product to the market, which thankfully has been accepted very well. The herbs are wrapped in a sustainable paper cone. “Although plastic is a great product to preserve the product, we cannot afford to use plastics as it’s not sustainable. We had to find a balance in these materials,” said Alessandro. Recently, new packaging of this kind was introduced, using paper trays. Currently, the plants are sold alive, either for consumers to harvest them immediately or transplant them.

“Many have been focusing on technology and have forgotten about the market. Without a market, there is no technology that’s worth doing. Most of the farms have been focusing too much on some technologies such as AI vision, which its return is not clear. However, big investments doesn’t guarantee selling a product,” Alessandro says.

For vertical farming to compete with traditional farming is not the focus of Groots. The company is trying to spread word on the concept in Spain, raising awareness on the sustainable method to make people realize it’s more efficient. According to Alessandro, vertical farming will completely outpace traditional farming in every single crop. However, there are limitations. It’s just about trying to grow the right things in the most sustainable way.