"Technology has big role to play in making agriculture climate-smart" 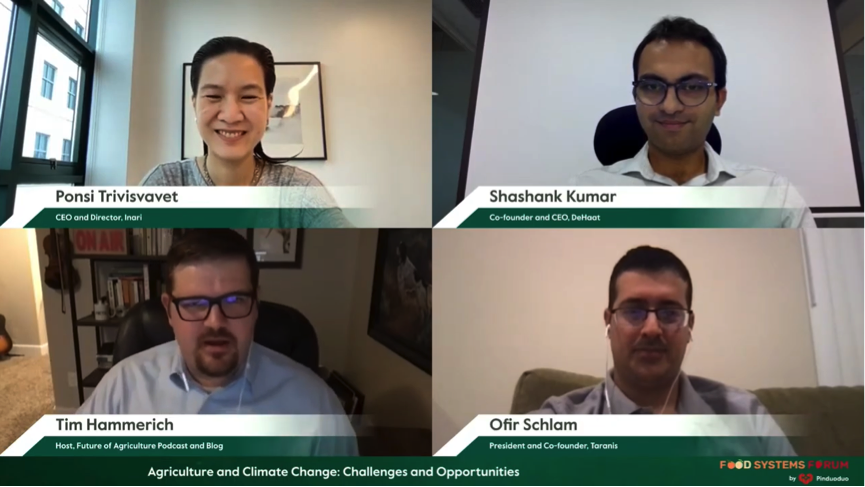 That is one of the most visible impact of climate change on agriculture that Shashank Kumar, CEO of online seed-to-market platform DeHaat, has seen in his work with farmers in India. The depletion of groundwater, which supplies 60% of India’s irrigation needs, could reduce the number of crops a farmer can grow in a year by as much as two-thirds in the driest regions, according to a study published in Science Advances, a research journal.

“It brings a circular problem because farmers think that the only solution is to put in more fertilizer,” Kumar said during the Pinduoduo Food Systems Forum on July 14. “That affects your soil fertility, your soil moisture, and your water retention capacity. Then you need more water from the ground, and then again you end up putting in more fertilizer in a subsequent season.”

Kumar was speaking on a panel titled “Agriculture and Climate Change: Challenges and Opportunities” at a two-day online forum organized by Pinduoduo, China’s largest agriculture platform. The forum featured experts from the fields of science and technology, finance and economics, and policymaking and regulation, and was one of Pinduoduo’s initiatives to promote agricultural modernization and a more sustainable and resilient global food system.

Agriculture has come under the spotlight for its multifaceted contributions to global greenhouse emissions and climate change. Beyond methane emissions from livestock agriculture, clearing forests for agricultural land reduces the amount of sequestered carbon, while overuse of fertilizers contributes to water pollution and production of nitrous oxide, another potential greenhouse gas. Meanwhile, the Food and Agriculture Organization of the UN projects that feeding a world population of 9.1 billion people in 2050 would entail raising overall food production by some 70% from 2005-7 levels.

Speaking on the same panel, Ofir Schlam, President of Taranis, an Israeli precision farming startup, said he has seen climate change disrupt the traditional agricultural calendar, meaning farmers can no longer rely on past practice to plan their planting cycles. Increased anomalies in humidity and temperature also contribute to pest infestation and disease, adding to challenges for farmers.

“Every year is a special year,” said Schlam. “Every year you really need to keep track of the soil, temperatures and precipitation and you might be able to plant the month before you are used to.”

Taranis employs high-definition aerial drone imagery and data analysis to monitor and intervene to prevent the progression of problems like weeds or disease. With more precise measurement, farmers could deliver just the right amount of water, fertilizer, pesticide and herbicides to the areas that need them, reducing the amount of wasted resources and increasing productivity, Schlam said.

While precision agriculture promises to reduce indiscriminate use of water, fertilizer and pesticides, intensive efforts are also being made at the start of the agricultural chain, namely seeds.

Calling seeds the “unsung heroes” of agriculture, Ponsi Trivisvavet, CEO of Inari, said her company is using artificial intelligence (AI) and multiplexed gene-editing technologies to develop seeds that use less land, water, and nitrogen fertilizers, one of the biggest sources of greenhouse gas emissions.

The combination of AI and multiplexed gene-editing, in which numerous enzymes are expressed at once, could vastly enhance the scope and efficiency of agricultural investment and reduce the timeline of product development, she said.

Current technologies of breeding and genetic modification can take between 7-10 years for the former to as long as 15 years for the latter, for the product to get to market, according to Trivisvavet. “That’s billions of dollars per year” for less than 1% in annual yield increase, she said.

From the beginning of the food chain with inputs like seeds, down the line to planting, harvesting, distribution and food waste management, climate change is “such a big problem … the more players we get into this area, the better it is,” she said.