FarmOne recently opened its new 10.000 sq. ft. facility (~930m2) in Brooklyn. “We wanted to take a big step up,” says Rob Laing, CEO at Farm.One. “There aren’t many spaces available in Manhattan that have much space for a farm.”

After looking at Brooklyn, they found an empty warehouse in the Prospect Heights neighborhood with lots of open space and many people living there. So it seemed like an obvious decision. Based near Vanderbilt Avenue, Rob says it's a great combination of local neighborhoods, transport links and most importantly, a well-suited building.

“It’s a very unusual building in the neighborhood with an open floor plan, which didn’t need much construction and we could move in quickly,” Rob notes. The neighborhood is pedestrian- and bike-friendly which creates a lovely atmosphere. Rob has high hopes for the new farm as they’ll be able to do more neighborhood-friendly activities. 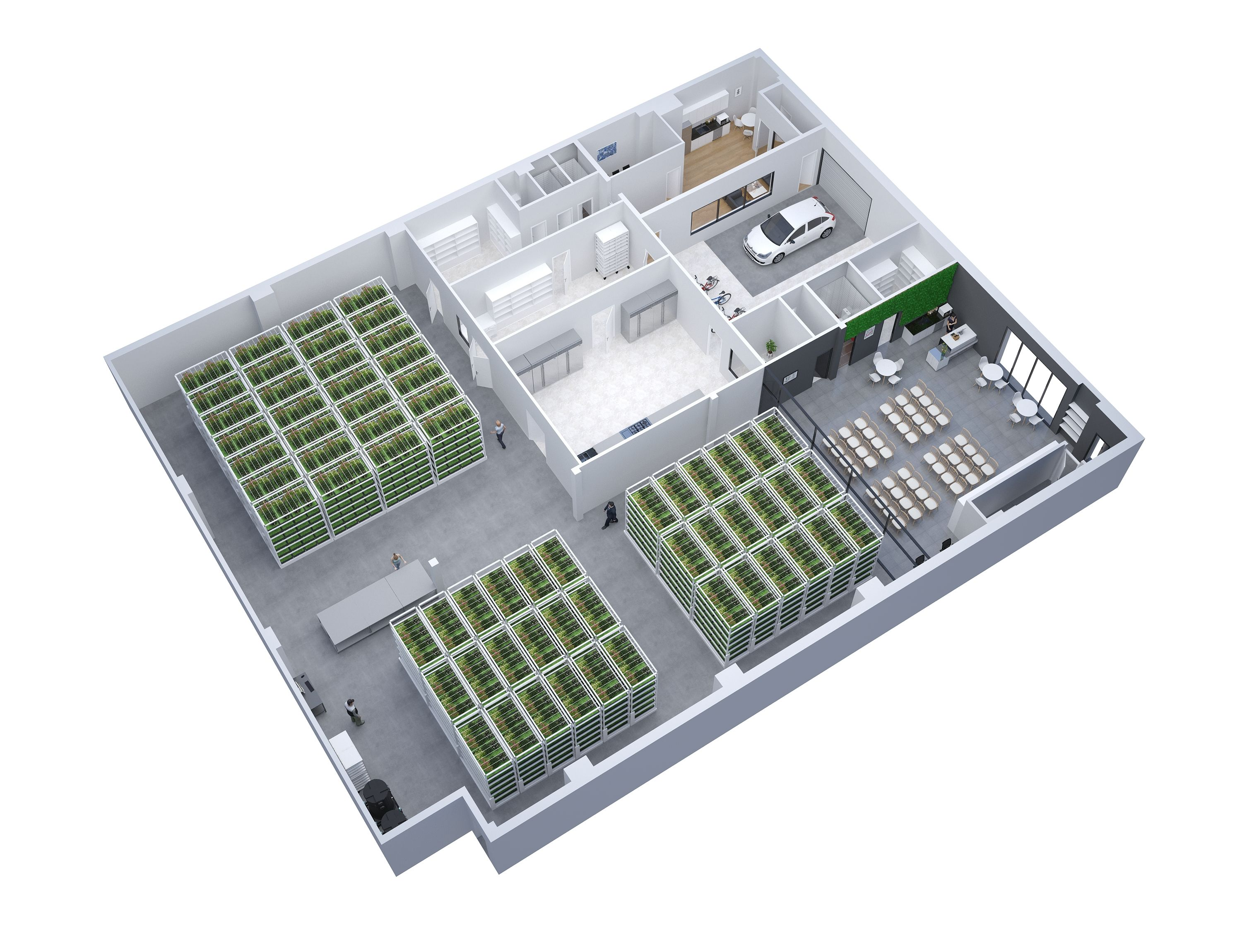 The farm design (Click here to zoom on the photo)

Expansion was heavily needed
Farm.One’s Manhattan farm based in Tribeca served about 40 restaurants, however, more space was needed to keep up with the growing demand. Last September, in response to COVID, the company launched a consumer subscription program.

By the end of October, their longtime Tribeca farm was already sold out and they had to use a waiting list. As many were waiting to be supplied with greens, Rob says to be lucky they found this place.

New features of the farm include Pipp Racks, which are easy to use according to Rob. The control panels used are developed by Farm.One itself. “We don’t have physical automation in the racks, but we have a Hamill Aps harvester that makes harvesting a lot more efficient,” he adds. 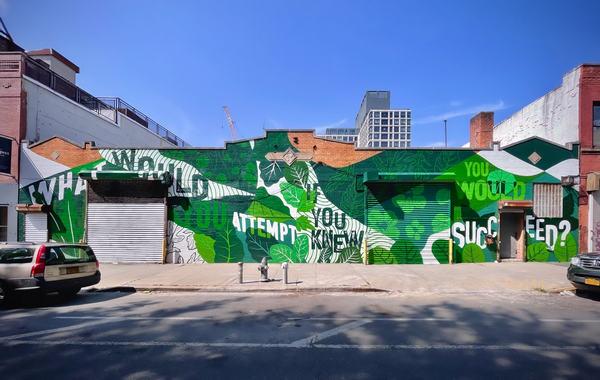 The outside looks of the farm

Showcase wall and shop
The new farm has a 1500-2000 sq. ft (~140m2) event space available, which will be used for farm-related activities. “We’re working with the architects to design a big glass wall to the farm which is about 600 sq. ft (~55m2). Farm.One plans to resume their popular and highly rated farm tours and events in the new space,” he adds.

As of now, a small retail space is planned for customers to buy some fresh produce from the farm. Rob adds, "There will also be a place for our members that live nearby so they can pick up their produce. Everyone wants to go to the farmers market, but it’s only open a couple of times a week. In this way, we can fulfill consumers’ needs with a constant supply of fresh produce.” 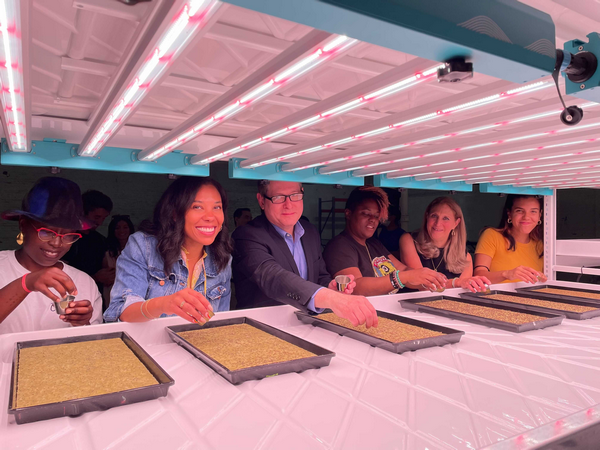 Visitors during the farm opening

A unique offering
Farm.One’s standard subscription comprises baby greens, lettuce, kale and microgreens, all in reusable containers which the company picks up at each delivery. Next to the regular subscription, there’s the blue box that encloses herbs, edible flowers and special items like spicy mustard greens.

“With the system, we have enough flexibility to grow the kinds of rare and unusual crops that Farm.One is known for. As New Yorkers love food and love the freshness we wanted to give consumers something unique. We get our members them excited about a salad mix with components that are unique and interesting,” Rob affirms. 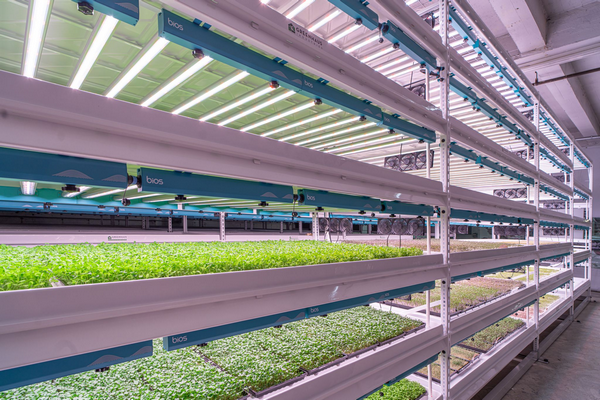 As Rob explains, it won’t work to just sell a box of edible flowers. Farm.One wants to do that differently, like having a delightful sprinkle that people can use in a cocktail or dish which isn’t overwhelming at the same time. The company shares new recipes each week to introduce the different menu options to get their members excited and help them learn about the plants that they might not be familiar with and ways they can use them.

Other projects running
Rob says that subscriptions are going great now. Everything is offered in reusable containers. Not long ago, Farm.One introduced a unique range of fresh smoothies which are blended the morning of delivery (supplied in glass bottles) with ingredients from the farm. Everything offered to clients is supplied in reusable material. 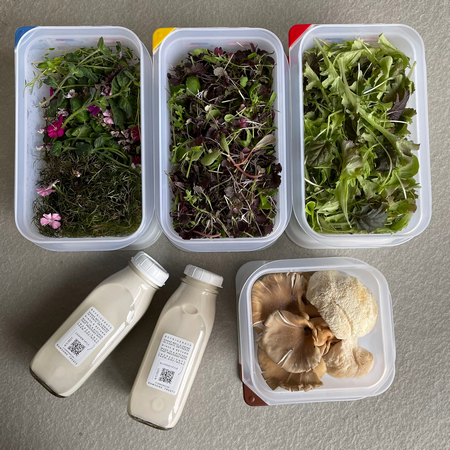 Everything is stashed in reusable packaging

Currently, the company is working on other products such as pesto and soup, expanding their product range. “We’re looking to work with local suppliers, always in reusable containers. We want to make it easy to have zero waste as we have the space to sanitize containers etc,” Rob affirmed.