Aerospring Gardens, a six-year-old Singapore start-up, has changed its name to Aerospring Hydroponics. The company has seen global interest in growing hydroponic food at home.

Thorben Linneberg, Co-Founder and CEO, says “For many years there wasn’t much knowledge of hydroponics and the benefits that it brings to homes around the world. But that has now changed, and we felt it was a good time for us to position our company squarely in the hydroponics space.”

Aerospring Hydroponics manufactures patented, high-quality, vertical hydroponic systems that make having a productive, useful and versatile home garden easy, no matter where you live. Whether you live in a city, the suburbs or a rural environment, Aerospring believes year-round home gardening is an achievable vision. 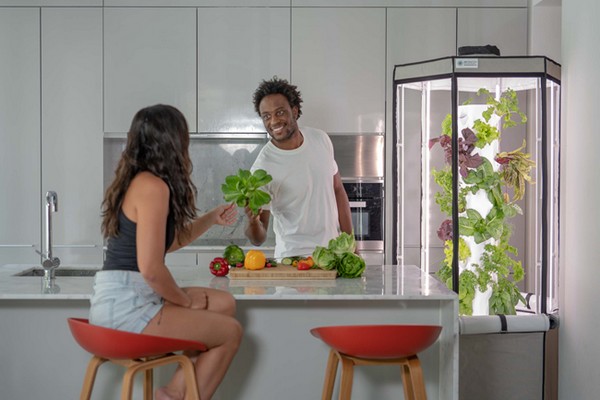 What started as a hobby and a desire to grow tomatoes on their apartment balcony in Singapore blossomed into a love of gardening - and for an interest in creating a sustainable food source at home. A densely populated city-state where most people live in high-rise apartments, Singapore sees less than 10% of its food supply grown nationally. The climate and land-scarcity make growing food challenging, which means high prices of imported fresh produce.

Nutrients
“We wanted all the nutrients that come from eating food harvested that day”, says Nadine Linneberg, Co-Founder. “We had concerns about pesticides and where our produce was coming from. We also knew that these concerns were very real for many people - no matter where they live. These factors, and a natural interest in problem-solving, inspired us to develop our own hydroponic system with the aim of growing our own food at home.”

Encouraged by an early design breakthrough, Thorben set about prototyping systems for commercialization. The goal was to design and build a food safe system that was functional and looked chic on any urban city balcony. Twelve months of 3D prototyping followed, which led to the unveiling of a sleek, modular vertical gardening system, which was simple to assemble and easy to maintain. Even better, it fit into the smallest of spaces. Aerospring received its first US patent for the aeroponic system in 2020.

Upon the functional and commercial success of the outdoor systems, Thorben started developing a prototype for an indoor system to cater for those without sufficient outdoor space and sunlight. The Aerospring Indoor system, which was launched in 2018, is a unique 2-in-1 convertible indoor/outdoor system. When the system is combined with the innovative indoor kit, which includes professional-grade grow lights, frame and tent, it allows for year-round growing: grow outdoors during spring and summer and bring the system inside when the weather starts getting colder. Irrigation and lighting schedules are controlled via a mobile app from a smartphone, taking the worry of tending to your plants daily away from your everyday life.