"We’re hoping for a more domestic type of farming”

“Whilst living in a 9-square meter student residence, the idea of being able to use this really small space to sustain myself with well packed nutritious food was what sparked the idea of Vita” Walid Brahim, CEO with Élever Group explains.

A small personal farm for everyone, a revolutionary product that combines aesthetic looks and the implementation of the most advanced technologies to date. That is the idea behind Vita that Élever Group recently launched.

The main aim of creating Vita was to bring a new level of transparency to food production, powered by blockchain technology, permitting users to safely buy and sell their harvest within small-scale communities. “We noticed that France, despite being a nation known for its agricultural scene, has experienced somewhat of a downfall regarding the people’s confidence when buying or consuming the goods grown in their own country. With Vita, we aim to rebuild this confidence,” Walid explains. 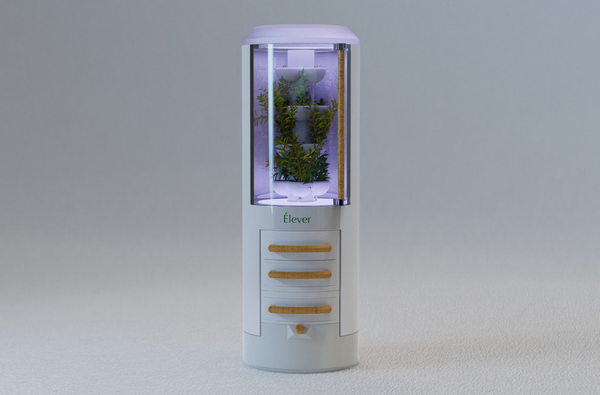 Growing transparency
The main factors that compelled Élever Group to focus on a more domestic scale growing were the transparency that would give users the trust in their own harvest. “No matter how efficient an industrial farm maybe, seeing your harvest grow in front of your own eyes will always be more appealing to people. That’s why we opted for Decentralised Community Supported Agriculture (DCSA), which is much more tangible with this personal vertical farm.”

Besides, a small growing system is much more economical in terms of building and needs less electricity. “Another factor we are tackling here is the transport. With Vita, practically no transportation is needed. We’re hoping for a more domestic type of farming.”

But there’s more to Vita than practical reasons. The cylindrical outer shell has importance both in pleasing the eye and engineering ingenuity. This also goes for the cooler and for the size. As the design team states: “We wanted Vita to be able to blend in whatever environment it would be placed in, be it a small, suburban apartment, a rural cottage in the hills, a university laboratory, or a large supermarket.”

The Vita can grow many different crops, ranging from leafy greens to soY fruits, but also allows for growing mushrooms. “These crops were mainly chosen for their high-dense nutritional value. Élever Group wants users to be aware of their health in every possible way,” Walid adds.

Full automation
To allow for smooth use for even the least IT-savvy home growers, Vita will be fully automated. It is supplied with a decentralized application (DAPP) which allows users to monitor their yields in real-time, also allowing them to change parameters such as light, humidity, and airflow. The DAPP also helps users to see how well their communities are doing with growing their own food, placing it in a safe and transparent marketplace.”

Because of its relatively small size, Vita was mainly created with the idea of supplying larger cities, as inhabitants were previously unable to grow produce there. But the company is in talks about providing Vita to supermarkets & restaurants. “We believe it is the best way to interact with everyday customers. After all, everyone visits supermarkets from time to time, & eat at restaurants. We hope that the customers will be inspired by Vita to purchase one and start growing themselves.”