Sales Director Jan Mol is one of the founders of Oreon. Jan Mol and his partners started the business incubator Tendris in 2002, with sustainability as its absolute starting point.

“At the time, sustainable was practically a synonym for expensive. The idea was: we need to save simply by using less energy. Eating less, traveling less, car-free Sundays, turning off the lights more often. But all that became more, in fact. We focused mainly on using energy more sensibly. Tendris committed itself to technological innovations in sustainability. That’s the only way we can make major advances. And it wasn’t long before inventor John Rooymans knocked on Tendris’s door.”

Lemnis Lighting
“One of the initiatives that crossed our path was LED technology. John Rooymans found a solution for the problem of heat from LEDs. His solution allowed us to make a 6 watt LED bulb that’s as strong as a 60 watt incandescent bulb: a 90% reduction. Twice the savings of energy-saver bulbs, which, aside from their energy savings, also had a lot of drawbacks,” Jan says.

The people at Tendris were excited about the invention and decided to go for a rapid launch with partners. So they took it to manufacturers like Philips. They knew that at least 25% of all electricity consumption internationally is from lighting. A rapid and complete transition to LED would therefore have an enormous impact. Yet there was no interest in it; for the big players, the energy-saver bulb was much more urgent. They decided to do it themselves as this technology was too valuable to leave on the shelf. So Lemnis Lighting was born.

The problem was the cost: the LED bulbs cost €25 each, whereas energy-saver bulbs cost less than €1. But they managed to get their bulb on the market through energy company Oxxio and the Dutch Postcode Lottery, which were also keen to make their customers aware of this form of sustainability.

The selling point was obvious: this bulb may be more expensive to purchase, but over the long term it pays for itself because it simply uses less energy. When IKEA showed an interest in selling the LED bulb in their stores worldwide, the breakthrough was made and the price plummeted. 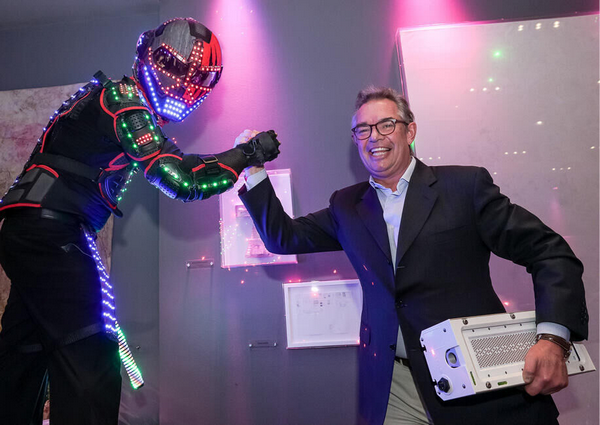 Bright minds came together. High output, maximum efficiency, small dimensions, maximum lifespan, and rapid payback for growers. “In addition, we had to come up with a good solution for the heat in the greenhouse, because growers want more light but not extra heat,” says Jan. To prevent heat and remove it directly from the greenhouse so that it doesn’t affect the crops, you need the best heat conductor: water. So a water-cooled light was developed.

“We were sitting around the table with the best, most innovative growers, the smartest installers, and the science. We listened carefully and came up with a solution together. Now we have the best light in the world: the smallest, producing the most light, hardly any heat, and the highest efficiency. Using the best components resulted in an unprecedented long life span, which was extended even further by the perfect cooling system. We sell our lights all over the world, partnering with dealers and installers. They know the local markets and install our lights quickly and professionally.”

Innovative horticulturists
Jan is still motivated and enthusiastic about greenhouse horticulture: “I really have huge respect for growers. They work hard, they’re smart, and they’re open to innovation. It’s mainly courageous growers who are behind true innovation in horticulture. In just a few years, all of the horticulture industry has switched to LED technology. The result is huge energy savings, less chemical waste, lower costs, and even higher yields per m2. We’re really proud of that. As a business, there’s nothing more satisfying than making products that are a win-win for everyone.”