CEA expected to rapidly grow in the next 10 years

Last week, one of the educational sessions at the Organic Produce Summit included a panel discussion on the Growth of Controlled Environment Agriculture (CEA): What's Real and What's Hype?

One thing all participants agreed on is that CEA is here to stay.

Moderated by Walter Robb, former co-CEO of Whole Foods Market, the three panelists debated the future of CEA. Or, debated? All being CEA growers, they believe CEA is here to stay and that within the next 10 years, indoor-grown produce will make up 20 percent or more of total produce sales. "However, it is not a solution to everything," Philip Karp said. As the president and co-founder of Shenandoah Growers, established as a field grower 32 years ago, the company has expanded its indoor-grown offerings in the last couple of years. "There will be a place for the field forever. Within CEA, we just need to keep up the promises, otherwise, it may turn into a hype."

Paul Mastronardi, President, and CEO of 4th generation Sunset/Mastronardi Produce, believes CEA is a reality, and the focus will be on adopting new technologies. "The biggest innovations we are going to see in the next few years are robotics and Artificial Intelligence." Marc Oshima, co-founder of vertical farm Aerofarms, established in 2007, commented that CEA is very much a reality as long as the industry keeps on delivering a value proposition for the consumer.

CEA
So, let's go back to the start. What is CEA? Being a relatively new term, CEA is short for Controlled Environment Agriculture, and according to the panelists, there's no one definition, other than 'everything but open field' or 'produce that isn't necessarily grown in soil'. Yet many words were mentioned to describe the benefits of CEA. From the use of less or no pesticides, more efficient use of water, lower carbon footprint, to reduced food safety risks.

At the moment, CEA makes up less than one percent of total produce sales, but the panelists discussed why they are using this method to grow produce and how they see CEA developing in the future. 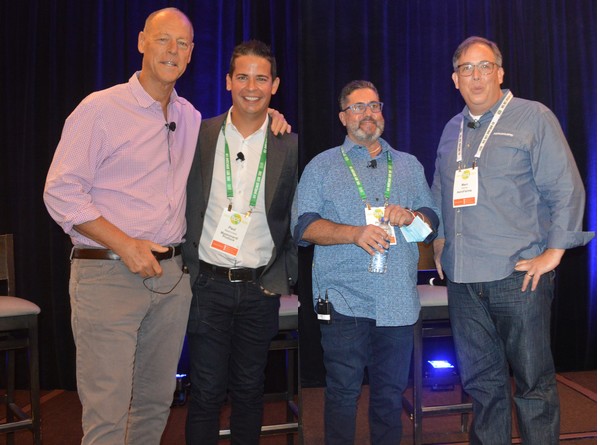 Why grow in a controlled environment?
What are the drivers of growing in a controlled environment?  According to Paul Mastronardi, climate change has a big impact on the growth of CEA as it allows for better climate control. Also, consumers are looking for chemical-free produce, and with the help of an Integrated Pest Management system, zero or far less chemicals are being used compared to produce that's grown in the open field. Another driver of CEA is the opportunity to limit the human factor. "People no longer want to harvest or do other types of work in the greenhouse, so we've been working with robotics for about five years now," Mastronardi said. The company's future goal is to drop seeds on one end and see the final product on the other end by entirely limiting the human factor.

At Shenandoah Growers, Phil Karp says the aim to consistently supply high-quality products is the reason to shift the focus to indoor farming. The company started out in the field, and from being mostly an open field grower, it has made the shift to indoor growing, with 90 percent of supplies being indoor-grown by 2023.

For Marc Oshima, CEA is about control, and his company Aerofarms focuses heavily on reducing food safety risks. "Growing indoors helps minimize the effects of what we're seeing in the field," he says. The company is also focused on making connections with the communities it is present in. "We have both large-scale as well as community farms to create the connection between food and the community."

Specific innovation of each grower
As part of growing in a controlled environment, each grower has made innovations in recent years. Sunset/Mastronardi has been recycling water for more than 20 years, no chemicals enter the water stream, and production is carbon neutral. However, Mastronardi strongly believes the most important innovation will continue to be varieties. "We can't forget about the varietal factor as the focus on varieties and flavor will continue to be key."

Shenandoah's Karp added that water is being recycled in a closed loop system, and as little water is used as possible. "The roots just need to fight it out," he commented. One of the company's innovations is lighting. "There is a fine line between optimizing and overdosing the amount of light given to the plants," Karp shared. "We have a big responsibility in using the right lighting at the right intensity." At Aerofarms, the focus is on growing produce with a better flavor, longer freshness, and distributing locally.

How will the organic standards evolve?
Produce that's grown indoors is often grown hydroponically without the use of soil. According to USDA standards, for products to be labeled 'organic' it needs to be grown in soil. Robb asked the panelists how they see the organic standards evolving in light of CEA. Mastronardi shared his company has been growing organic produce for 15 years and has been growing in containerized soil for the past 10 years. "The organic standards are different everywhere around the globe, and I feel there should be one worldwide standard," he said. As an example, he mentioned how Canada has higher standards than the US. According to Oshima, it is all about growers being good stewards and not whether soil was used or not. "I am confident we will ultimately see a new level with different sets of standards for CEA."