With the ever-increasing world population, the decrease of arable lands, and urbanization trends on the horizon, it is no surprise that the agricultural sector is looking into alternative ways of farming. While rapid advances in technologies are reshaping the ways agriculture is being practiced, robots are increasingly being adopted across smart farms and vertical farms.

As you may know, and as the name suggests, vertical farms are purposely built to produce more food per square meter by using a stacked-layers structure for the cultivation of crops — more or less in the shape of a tower. An acre of a vertical, indoor farm is able to cultivate just as much as 10 acres of a traditional, outdoor farm. This means that only one-tenth of the land is needed to produce the same amount of food. Let’s have a look at how robots play a role in this. 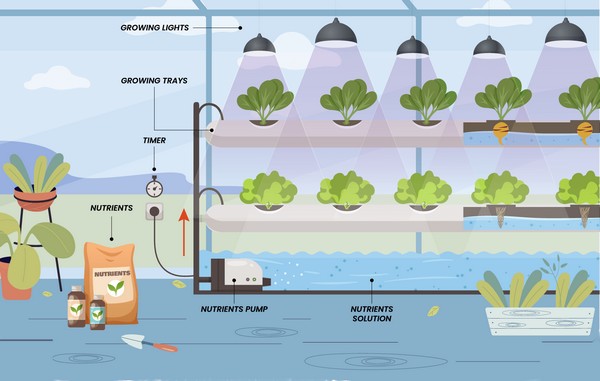 Robotic automation in vertical farms
A vertical farm is built using a wide variety of technologies, ranging from LED lights and rotating beds for optimized lighting to hydroponic growing mediums for water conversation, more precise nutrient supply, and the elimination of harmful chemicals such as pesticides. In addition, another major technology that can often be found inside vertical farms is robots.

So how exactly are robots used in vertical farming? There are many examples to be given, but some of the most common ways in which robots are being used are related to moving shelves in the correct position, stacking the produce, harvesting, inspecting the plants, and seeding.

However, what is important to note is that there can be a wide variety of different types of robots in vertical farms, which can lead to a huge issue that is commonly overlooked in the robotics industry: interoperability.

The lack of interoperability
There is a clear need for interoperability in the robotics industry, which is driven by two major trends: the diversification of robot fleets and the growing demand for mobile robots. Interoperability relates to the ability of computer programs or systems to exchange information.

As mobile robot fleets increase and become more diverse, the need for communication increases, too. However, with robots becoming more specialized, this can become an issue very quickly. Manufacturers supply their robots with their own, individual operating systems, which means that robots from different manufacturers will not be able to communicate with each other.

A fleet management solution
A universal fleet management system (FMS) can perform the complete management of a fleet consisting of different types and brands of robots, all from one centralized place. Common features of an FMS  include task management, traffic control, route planning, data analytics, and fleet monitoring — think of the robots’ locations, statuses, missions, battery levels, and so forth.

Besides offering a solution to the interoperability issue in the robotics industry, a universal FMS has three major advantages that can take your vertical farm to the next level:

●        Increase operational efficiency by allowing vertical farmers to detect and respond to issues immediately and remotely.

●        Improve safety on the work floor through the traffic control feature that allows robots to predict, detect, and respond to bottlenecks autonomously.