Improving flavor of produce without starving its resources

A Dutchman in an Italian vertical farm - it sounds like the title of a song, but it actually describes Roel Janssen, Chief Business Officer (CBO) with Planet Farms. The company built their first vertical farm in Italy, but Roel will stay in the Netherlands for a while because, according to Roel, the Dutch are at the forefront.

Planet Farms was started by two childhood friends, Luca and Daniele. “They reconnected after being away from each other for quite a long time. Luca has a background with his family company building food factories, and his specialization is drying food in the most optimal way,” Roel says at the Vertical Farming Conference. Therefore, Luca knows all about microclimates, having gained experience with autonomously operating factories ranging from one to three hectares in size. Daniele takes care of the investment side of the company. “Food technology meets finance.” 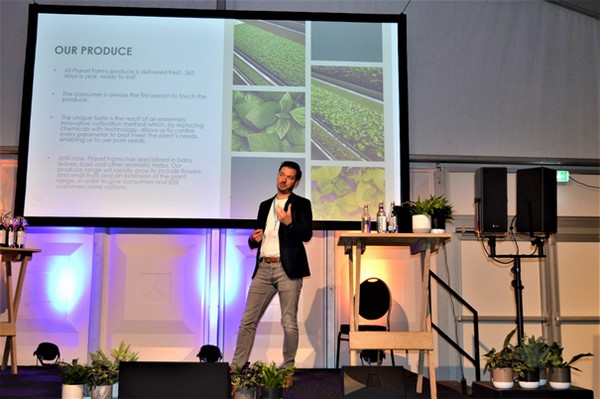 Of course, technology is not enough; you also need a market, which is why Planet Farms started out pitching their produce not just to one retailer, but four, for a total of roughly 220 stores.

Flavor first
But ultimately, it is not about the technology, it is about the flavor of the produce. Roel gives an example of basil. He came to Italy with a lot of knowledge about basil, only for Luca to tell him: “That’s not basil.” The moral of the story: people have different expectations depending on where they are.

“Many vertical farmers focus on the highest yield at the lowest cost. In our case, it’s flavor first.” This focus on flavor has also resulted in cooperation with a ‘taste ambassador’, three-star Michelin chef Chicco Cerea of the restaurant Da Vittorio.

That focus on flavor appears to pay off, as Planet Farms will soon be expanding from Milan into other Italian cities, as well as expanding across Europe.

From theory to practice
Planet Farms also carries out its own research. “Our R&D facility is around 300 m2 divided over different cells. We carried out research to subsequently do trials with the leafy greens that we currently grow.” Once you scale up to a bigger facility, that becomes a validation of sorts, because things are different there compared to R&D, from microclimate to irrigation. Planet Farms also participates in the LIFE project, where the savings on water and fertilizers are quantified, so they can prove their sustainability with numbers.

Automation
“Nobody goes into the cells from the moment the seed has entered. When we get an order from a big retailer in Italy, the order goes into the ERP (Enterprise Resource Planning), which triggers all the processes inside the factory.” From sowing to harvesting and even packaging into a box, everything happens automatically. There can be as little as six hours from the moment of harvest to when the produce ends up on someone’s plate.

Babyleaf
Planet Farms currently only grows leafy greens, all of which babyleaf. They offer three mixes, a more oriental one with bok choy and tatsoi, a spicy mix with mustard, rocket, and mizuna, a traditional lettuce mix, as well as single variety lettuce. “We’re launching rocket in a few weeks as a single variety as well, and the next step is to improve our varieties on nutrition by using specific growing recipes, but always with taste in mind.”

Greenfield
Next, Roel explains the way the company's workflow functions. “We don’t just take an empty distribution center and put some racks inside. We started Greenfield because that way we can really optimize and take a factory approach. You can really optimize processes that way because you’re not hampered by a construction site that’s already there, or by a structure that’s already there.”

It fits into the factory approach they take at Planet Farms. “We run factories. In the end, we want to improve the flavor of produce without starving its resources. By building large-scale farms, we can be more competitive.” Automation also means you need less labor, making it easier to scale faster.