A Festival of Horticultural Technology held at Pershore College has been greeted enthusiastically by both speakers and an audience which was made up of a range of representatives from sectors as diverse as Her Majesty’s Prison Service to the National Farmers’ Union.

The day was the second of a two-part series that examined how improvements in technology could offer solutions to a range of issues affecting UK food supply and production now that Britain has left the European Union and the industry strives to lower its carbon emissions.

Among the speakers were Steve Bradstock from Live Farmer and Nigel Pugh from Impact Aerial who spoke about using satellite data to monitor crop health in real-time and how AI (artificial intelligence) and machine learning can be used to manage invasive plant species like Japanese knotweed.

Harvest wall
One of the day’s highlights was the first UK showing of a novel vertical growing system created by Anglo-US start-up Harvest Today, which enables users to produce fresh quality salad crops indoors, whatever the weather and season.

The app-controlled Harvest Wall comprises a scalable growing kit consisting of a mainframe, click-on tiles, and an internal irrigation system. The concept was envisioned by Canadian Rick Langille and his British business partner Mark Chatfield whilst they were on an around-the-world sailing adventure. The duo’s aim is to make sustainable locally-grown greens a reality from the Arctic to the Equator. 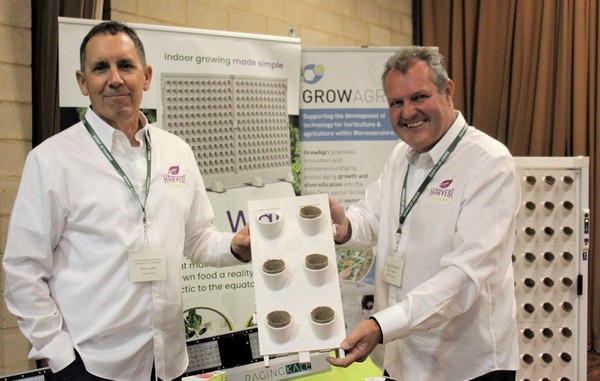 Rick Langille, chief executive officer of Harvest Today, said: “It was a pleasure to show and demonstrate the benefits of our Harvest Wall technology to the delegates at Pershore College. It provided the perfect opportunity to soft launch the arrival of our demonstration model here in the UK to some key individuals in the industry.

“It was a really diverse event; we are excited to participate in this growing movement of entrepreneurism in horticulture and the development of new products. We believe that this kind of automated growing system has the potential to transform the way communities grow their food, be it in an urban or rural setting.

Growing population
Other speakers included local chartered surveyor and ornamental plant grower Tony Rowland, who spoke about the dearth of family-owned nurseries due to the practices of the UK supermarket industry, Dan Pitt and Rob Pearce from chartered accountants Bishop Fleming who explained how the government’s R&D tax credits scheme can assist organizations to fund the development of new ideas, and Pershore College’s own Professor Roy Kennedy who spoke about the use of data and digitization in the food chain.

In the audience was former Pershore student Chris George, a land-based activities specialist working for Her Majesty’s Prison Service. He said: “It was a really useful day and a real eye-opener. Growing techniques and technology have moved on immeasurably since my days as a Pershore student in the late 1980s.

“Rick from Harvest Today summed it up when he said that growing food via traditional means will fracture under the strain of an ever-increasing worldwide population and climate change. Moving forward, we simply will not be able to grow enough to sustain our populations globally.

“Alongside this, I picked up on a key message which resonates with us in the prison service which is the continued urbanization of our space in the UK. This is one of the reasons we are looking into vertical growing systems, due to the lack of green space we have at some of our older inner-city Victorian prisons.

Attendees also got to tour around the futuristic facilities of the college's Agri-Tech Research Centre’s which include an indoor hydroponic plant-growth chamber and an outdoor vertical farm with event organizer, Agri-Tech Research Assistant Dr. Anjana Patel.

“Our audience benefited from hearing about a range of different ventures in horticultural technology led by individuals who identified an opportunity and are now turning their ideas into commercial enterprises.