Zahid, Ph.D., Texas A&M AgriLife Research assistant professor of controlled-environment agriculture engineering, joined the Department of Biological and Agricultural Engineering in the College of Agriculture and Life Sciences at Texas A&M University earlier this year after completing his doctorate in agricultural and biological engineering with a focus on artificial intelligence and robotics at Penn State University.

His research at the Texas A&M AgriLife Research and Extension Center at Dallas seeks to create and implement automation and artificial intelligence into controlled-environment agriculture like greenhouses and vertical grow systems in warehouse settings. The field is burgeoning and evolving rapidly. 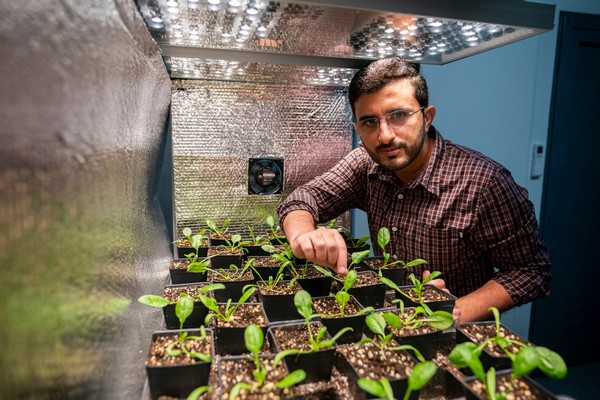 Companies like Google, Amazon, and Space X are investing in what Zahid and others believe is the future of localized food-crop agriculture, especially production that supports urban areas. For example, Space X is currently working to develop commercial production of leafy greens but is also working toward mimicking earthly growing environments for fruit and vegetable production on Mars.

“The applications of this production method are limitless, but the immediate goal is to cut out links of the supply chain and grow food in urban settings,” he said. “Removing shipping costs and the time it takes for food to move logistically allows growers to deliver the highest quality fresh fruits and vegetables quickly to consumers.”

Automation, AI, and robotics can take well-established growing methods to the next level.

The goal of Zahid and the controlled-environment program at Dallas is to develop systems that optimize the microclimate inside the grow space. This could include manipulating light, carbon dioxide levels, temperature, humidity, and other factors that plants need to develop, based on feedback the system receives from the crop, down to the individual plant.

A fully integrated system will work around the clock to take food crops from seed to harvest. For instance, Zahid is working to create a system that monitors plants for needs and problems. It tends to the plants, and it harvests them when they are ready for market.

Zahid said controlled environment agriculture adds precision to production that will not only reduce input costs and crop losses but also post-harvest waste.

“Traditional production systems now require crops to be harvested and shipped to consumers in large quantities,” he said. “Much of that produce is getting to market too early or too late, and that leads to an incredible amount of waste. Growing in urban settings allow growers to get produce to consumers quickly, and AI technology will give growers the ability to detect maturity and hand-select fruits and vegetables for harvest at peak quality.”

Projects look to integrate AI, automation, robotics
Zahid just arrived at the Texas A&M AgriLife Center in Dallas but already has a handful of projects underway.

One project looks to automate irrigation and control it remotely through the internet. Sensors and cameras can detect moisture levels and trigger the application of specific water amounts according to individual plant needs at the touch of a button from a mobile device, including smartphones.

Another project hopes to correct a seemingly simple issue for automated units to navigate in controlled environments, providing global positioning system connection and precision inside buildings.

He also plans to create a system that actively scouts plants for symptoms of pests and disease. Robotics will be integrated into the detection system to provide precision treatments to compromised plants.

Zahid said the goal is to produce a monitoring system that acts as an early detection and management tool that prevents infestations before they spread. Eventually, a fully integrated precision production system will control inputs like fertilizer and water and the use of chemicals to control pests and disease.

“Once the disease or pest is detected, the system would treat those specific plants only,” he said. “We are building a case for how we can produce crops with the least amount of organic inputs or chemical use possible.”

Public, private partnerships will drive innovation
Zahid joins a team of controlled-environment scientists fixed on leading Texas and the U.S. into that future. The artificial intelligence and automation projects utilize ongoing research at the center, which primarily focuses on producing tomatoes and leafy greens, like spinach and kale.

Daniel Leskovar, Ph.D., interim director of the Texas A&M AgriLife Center at Dallas, said the interest in growing systems that maximize space, resources, crop yield, and quality is growing. The potential for creating integrated systems is driving public and private investment and innovations in technology.

“These systems will still need people, but the nature of the jobs in agriculture production will change,” he said. “Human skills will be necessary to use and maintain the systems.”