From the onset of the Covid-19 pandemic, fresh vegetables were hard to come by in rural areas outside of Halifax, Nova Scotia. The cost of the produce that was available began to increase, and the quality was decreasing.

It was then that Kris and Brenda Sutton circled back around to an idea that Kris had researched a few years earlier: vertical farming.

They learned that growing produce where it is consumed eliminates supply chain issues and can give customers peace of mind knowing where their food is coming from. It also means consumers get fresh, nutrient-dense produce compared to those being shipped in, losing nutritional value as they are transported. Additionally, they learned that the vertical farms can operate year-round, regardless of the season, allowing for quality and consistency for the food. 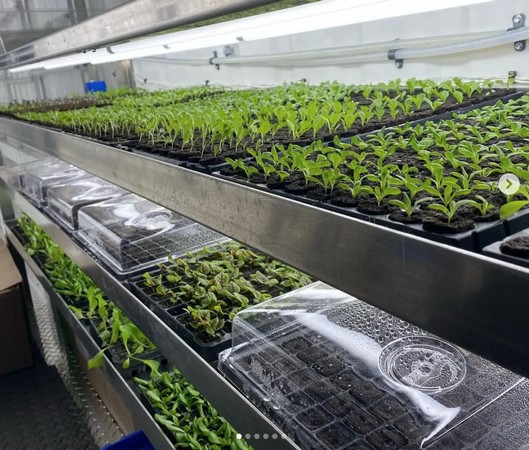 The idea was tossed around for a short time between the couple, but after Kris was briefly put off his work as an airplane mechanic following a back injury, he laid on the couch and daydreamed more and more about running his own vertical hydroponic farm. He saw this career as a less physically demanding and more rewarding one. His “happy place” during recovery was thinking about “getting back to gardening and planting seedlings in the Spring.”

Daydream became reality
Kris and Brenda decided to contact and visit a nearby vertical farm and quickly embraced the concept and all it could offer. “She was more excited than I was at that point,” Kris says, then adds, “well, close. On the same level.”

Months later, the daydream became a reality when a FarmBox Foods container farm was placed in their backyard. Within weeks, the first crop was on its way and Sutton’s Vertical Gardens was officially in business.

Together Kris and Brenda developed a start-up plan that includes selling a variety of lettuces to local grocers and restaurants between Halifax and Enfield, Nova Scotia. Sutton’s Vertical Gardens also has plans to further serve their community in the future by hopefully offering the container farm as a venue for school field trips, volunteer experience, and educational purposes.

”Yes, we want to make money and have a livelihood, but we also want to try and educate and inspire others to be farmers, innovators, and entrepreneurs. Who better to start sharing these ideas with but our future generations,” Brenda said.

Kris, the business’ main farmer, who comes from a family of green thumbs and has an existing 14-by-24-foot greenhouse filled with bell peppers, cucumbers, and tomatoes, gets up at 5:30 a.m. every morning and embarks on the shortest commute he has ever had. He walks to the FarmBox Foods container farm in his backyard in Enfield, NS, a mere 30 feet away from the fenced-in play area for the Sutton’s adorable odd couple Boston Terrier and Great Dane, and walks into his new office.