Attended virtually and in-person, many joined the CubicFarms Amplified event on October 21, 2021, which marked the official launch of the local chain ag-tech industry category developed by the Langley-based company founded in 2015.

“The world needs an agricultural revolution,” said Dave Dinesen, CEO of CubicFarms. A powerhouse roster of sustainability ambassadors joined Dinesen and other CubicFarms executives at the event. They included Canadian astronaut Commander Chris Hadfield, Henry Gordon-Smith, Founder and CEO of the Agritecture consultancy, and Dr. Lenore Newman, Director of the Food and Agriculture Institute at the University of Fraser Valley and chair of the CubicFarms Scientific Advisory Board.

“With local chain ag-tech, we not only become climate independent, we also decrease land use and the greenhouse gas emissions generated by transporting food,” Hadfield said in a conversation with Dinesen. 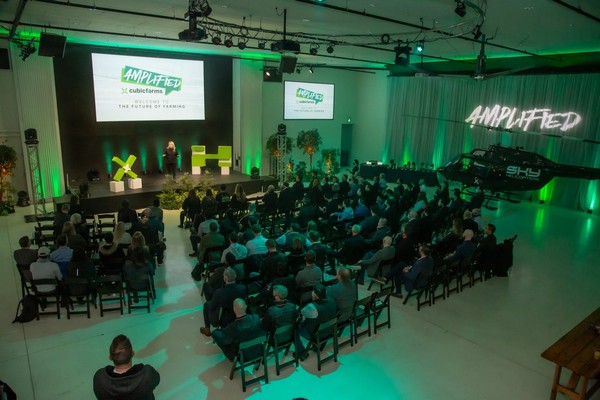 The hybrid event took place at a helicopter hangar in Pitt Meadows, BC, Canada

Several Farmer Partners were also on hand to explain how CubicFarms is helping them operate more sustainably and profitably. According to Michael Rigby of Utah’s Rigby Cattle Co., CubicFarms’ local chain ag-tech “saved our farm by allowing us to grow our own on-farm fresh livestock feed indoors. Our family has been in the cattle industry for generations, and we were considering getting out of the business entirely if we couldn’t get high-quality, nutritious feed for our cattle. Having a consistent, predictable feed supply no matter what the weather is essential for our family farm.”

At Swiss Leaf Farms., which recently became the site of CubicFarms’ commercial-scale Alberta Grow Centre, owners David and Alyssa Pfaeffli work with the CubicFarms team in conducting R&D and continuing to grow and sell produce locally. “We’re really proud that we can grow leafy greens right here in our community for the people who live here,” said David Pfaeffli.