It is literally a long way away, but growing crops in space is gradually getting closer, at least for Priva and EVE Techniek. Both Dutch companies had specialists working on the development of a special fertilizer and irrigation system.

In a project of the Deutsches Zentrum für Luft- und Raumfart (DLR), the partners developed two mixing systems for future cultivation missions on the moon and Mars that have now been installed for testing in Bremen. 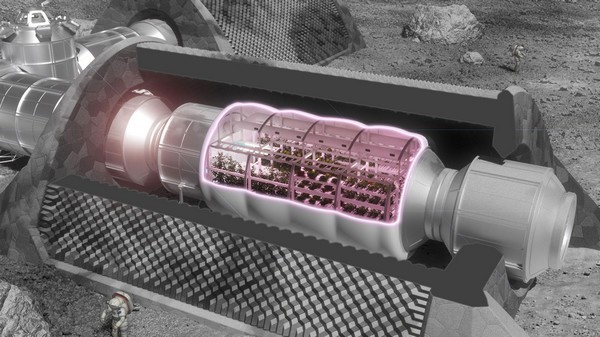 Overview of the complete cultivation concept that DLR is working on with partners. Photo credits: Liquifer Systems Group

Piet Veenstra and Marco Evers of EVE Techniek in Klazienaveen, near the German border, gloat when asked about the project. "It is fantastic! We think it is a wonderful challenge. When we were asked, we didn't have to think about it and we immediately said 'yes', of course."

Currently, the systems, which DLR says are "promising", are being tested in a laboratory in Bremen. They were installed last month, and the aim is to work towards a real-life system in 2025.

Precision dosage
It took eighteen months to devise the special manure and irrigation system for growing space. Edgar Konijnendijk, Manager Watering Systems at Priva: "The mixing system is being tested with a focus on indoor or small-scale facilities. We placed particular emphasis on a small and compact system that is capable of dosing with high precision."

The mixing systems are new prototypes developed by Priva exclusively for DLR research, part of EDEN ISS, a project focused on space cultivation. The complete unit consists of several parts: one is responsible for controlling the water level in the mixing tank, one for dosing the fertilizers, and one for irrigation and drain feed. The entire system is controlled with a Priva Connext control computer. 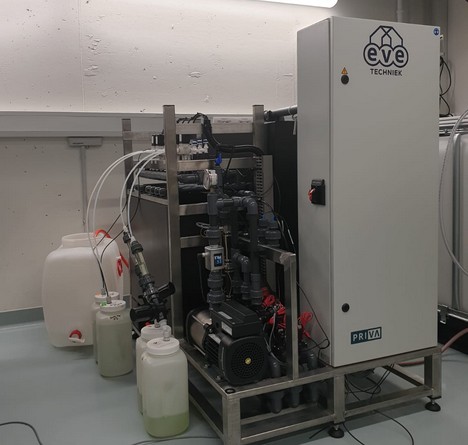 Keep on mixing
Piet and Marco from EVE Techniek work with Priva systems on a daily basis. Both were asked to contribute ideas as 'Priva specialists'. They explain to us how the system works, as far as currently possible: "The system we worked on consists of two compact silos. In one silo, with a capacity of 500 liters, the necessary fertilizers are continuously added until the feed water has exactly the right dosage. Only when this is the case in this mixing silo does the water go to what you might call the day supply silo. The plants are irrigated with the water from that silo. Every five minutes, the roots are sprayed, and meanwhile, a new supply is made with great precision in the mixing silo."

Testing nutrition and cultivation
For the test phase that now follows, the prototypes for the fertilizer and irrigation systems are linked to the closed-loop test facility at the EDEN laboratory in Bremen. During the test phase, different types of fertilizer solutions, cultivation methods, and mixing ratios are tested. In Bremen, a completely reconstructed space cultivation system has been set up.

A modular design of the fertilizer and irrigation system will be used to make adjustments in future tests where necessary. Daniel Schubert, project coordinator and founder of the EDEN Group at the DLR Institute of Space Systems. "The installation of the prototypes is a 'milestone' in the project towards a complete demo test system for space cultivation in 2025."