A new wood-based design could reduce the carbon footprint of greenhouses by enabling them to become heat providers rather than consumers. The enclosed design is ideal for vertical farming and growing crops in urban areas using less land, fewer resources, and less water.

The technology for the wood-based greenhouse was devised by Pasi Herranen, a doctoral candidate at Aalto University. After a year of building prototypes by hand, Herranen had developed the technology enough to warrant a larger-scale test, and a 65 m2 test greenhouse was built in western Finland.

The test greenhouse uses half as much energy and 95% less water than traditional glass greenhouses in year-round cultivation in Finland. "The wooden structures can be continuously maintained in good condition, and they insulate so well that no separate heating is needed. All of the heat comes from LED lamps lighting the lettuce crops," says Herranen. 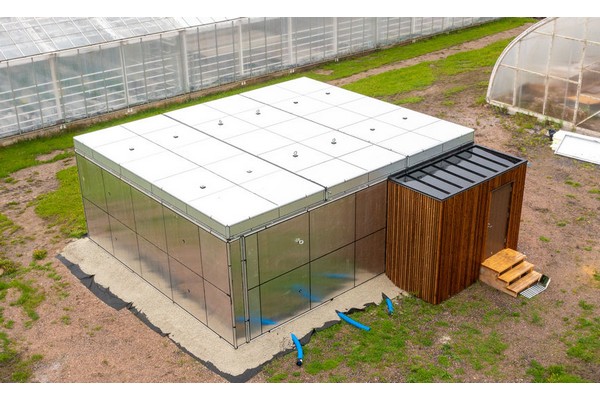 The secret lies in the birch plywood elements that make up the walls and ceiling, completely enclosing the growth rooms. Herranen used vacuum drying to remove moisture from the plywood. He also designed a special interior structure between the plywood panels that reinforces them, keeping the elements together under the high pressure of vacuum drying.

Heat producers, not consumers
The resulting insulation is so effective that no external heating is needed. The plants use about 4% of the energy from LED lights to grow and transform the remainder into thermal energy. "Up to 90% of the energy used for lighting could be distributed to the district heating network, which means that the greenhouses would become heat producers," says Herranen. District heating networks distribute heat produced at central facilities to many buildings. "On top of that, moisture released by the plants is collected and reused to water them again, so the water inside harvested plants is the only water that leaves the wooden greenhouse."

Vertical farming
The greenhouse was conceived and designed as an optimal solution for vertical farming. Growing crops in layers boosts the productivity of an area of land while using a complete enclosure reduces water use and means crops can be grown outside of traditional agricultural areas.

"Vertical farming is growing in popularity worldwide, as it can also be used to grow food in places that are too hot for traditional greenhouses. A fully sealed greenhouse allows for farming without enormous cooling costs," explains Herranen.

Lettuces and herbs are the most common vertically farmed plants, but Herranen says the method could also be extended to more nutrient-rich plants. Turning a profit in the face of high capital costs has been a challenge for vertical farming, but Herranen believes that selling heat to the district heating network could tip the balance.

Following the success of the pilot greenhouse, Herranen plans to build a larger greenhouse on the campus of Aalto University. This will let him test how well the technology scales up and see how it performs in an urban setting.

In the long run, the plywood elements could also be used in other types of construction. "The structure is so strong and compact that it could even replace concrete construction underground," says Herranen. "We’re planning to pilot this in the next few years."