Aruba is a small island in the Caribbean Sea that relies almost entirely on imported food to survive. 297 Farm saw the extensive problems this dependence brought with it and decided to try and remedy the situation by growing food locally. First, they built a vertical farm, and now, a greenhouse is under construction.

Vertical farm for food safety
As Aruba is an island, importing food is no easy task, and the fact that almost 100% of Aruba’s food has to be imported only adds trouble, Patricia Mitton of 297 Farm explains. “It is important to start producing food locally. The food we import travels long distances, which means it has a large carbon footprint. Moreover, 30% of that food is spoiled when it arrives. When you consider this and add the difficulties climate change brings with it, Aruba’s food supply is extremely vulnerable.”

297 Farm decided to try and remedy this by building a vertical farm, Aruba’s very first completely indoor project, which taught them a lot, Patricia says. “As the first completely indoor grower, we did not have a local resource to learn from; we had to learn through experience. We quickly discovered that our needs required more than we had initially thought. Aruba’s humidity, for example, was a problem even though we were growing in a controlled environment, but we installed a dehumidifier which did the trick. As each challenge surfaced, we learned what we needed and overcame it.”

Currently, there are 10 types of lettuce grown in the vertical farm, as well as various microgreens and sprouts. 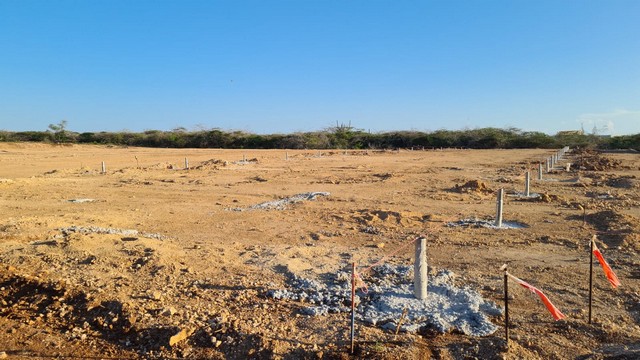 Building a greenhouse
Now, 297 Farm is looking to increase and expand that range of produce by building their own greenhouse, which will add a 10-fold increase in their produce. Not only that, Patricia says, “the greenhouse will allow us to expand and diversify to other leafy greens, herbs, and ultimately vine crops like cucumbers and tomatoes with which we can supply local supermarkets, – as we have done for the past 4 years – hotels, restaurants, and deliver directly to the consumer.”

The greenhouse they are building is from TapKit, an Israeli company. Patricia explains that this choice was made because they offered a complete system, including structure, technology, and assembly, but also that the fact that Israel’s climate is similar to Aruba’s factored in the decision. “Most important, however, was their many years of experience which made us feel secure.”

Although Aruba will, of course, still need a lot of imported food, Patricia believes the island is at a turning point: “The mindset is changing, and people realize that we need to become more self-sufficient as a nation in terms of food security. We are seeing an increase in local food production that blends traditional methods and innovative technological methods in the past few years. To be successful as a nation, we need both.”