“Particularly in cold and moderate climates, we can use vertical farms to create a sort of electrical or energy flywheel to balance cities’ energy while also producing food locally,” said Luuk Graamans during his talk at the Vertical Farming Conference. Luuk is a PhD researcher at Wageningen University & Research, where he studies the energy balance of vertical farms and the places where they are located.

“I tried to look at what we can do by combining our knowledge of building engineering, urban planning, and controlled environment agriculture to produce fresh food in the city, for the city, and using the city,” explains Luuk.

To do so, Luuk’s research looks at the crop level, facility level, and city level. He also compares the energetic balance of vertical farming to that of greenhouses in different locations. During his presentation, he took the example of Sweden, the Netherlands, and Abu Dhabi, which represented cold, moderate, and hot climates, respectively. 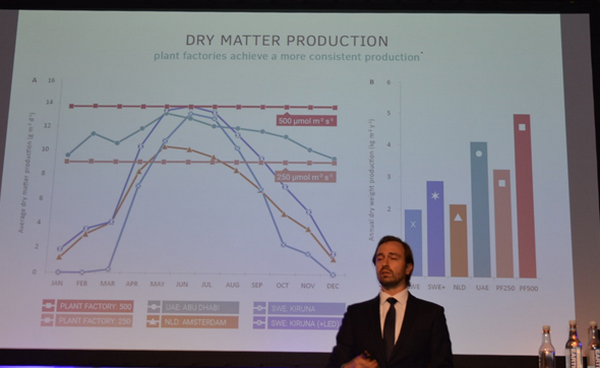 “While you need more energy for vertical farms, a greenhouse in Sweden loses so much energy that a vertical farm may be more efficient, and when you look at carbon dioxide and water, vertical farms can be up to 90% more efficient,” says Luuk. “It doesn’t just depend on the resources you use, but on which ones are readily available in certain locations.”

Combining vertical farming with heat storage to bridge energy supply/demand gaps
As Luuk explains, there is a fluctuation in energy demand throughout the day and between seasons. Energy production or supply varies in the same way, depending on the energy source. In the Netherlands, more energy is produced during the summer than in winter, yet demand is higher in the winter months. To this, Luuk asks the following question: can vertical farming play a role in bridging that gap?

Luuk explains that this model would likely work best in areas with water scarcity, where water is a more limiting factor than electricity. The next most efficient setting may be incredibly warm and cold climates, followed by moderate climates. However, this model is likely not the top solution in every region; sustainable greenhouse crop production will always have its place in the horticultural industry and complement vertical farming nicely.

As was the theme throughout the Vertical Farming Conference, there is no one-size-fits-all solution for vertical farming and local food production as a whole, but while vertical farming is not always the best solution for large-scale crop production, it is an extremely valuable tool for research, as it allows researchers to isolate different production parameters and understand why crops respond to their growing environment in the way that they do.