A new development project aims to develop a warning system to warn against harmful fungal spores in nurseries, making it possible to take early action and reduce the use of pesticides.

Danish Technological Institute heads the new development project, which aims to develop a warning system that makes alarm bells ring in nurseries when harmful fungal spores are detected in the air. Attacks from fungal spores are typically only detected when already widespread enough to make plants rot. Fungal spores cannot be detected with the naked eye, and therefore act as one of the main threats in nurseries.

"We have sensor specialists, fungal experts, and molecular biologists involved in the project. It is a highly challenging task, as nurseries are already filled with particles of different kinds. That makes it challenging to identify grey mould, which is the fungus this project is focused on," says Sensor Specialist and Project Manager Thor-Bjørn Ottosen from Danish Technological Institute. 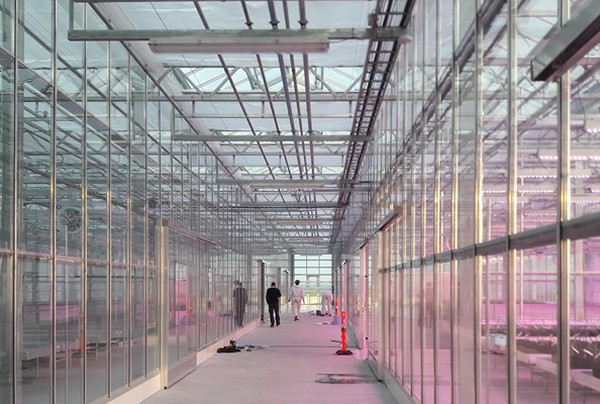 Microscopic tentacles
The aim is to develop a detector box consisting of two parts. First, a particle counter measures the number and size of particles floating around in the nursery and into the detector box in real-time. When the particle counter registers particles the size of fungal spores, these are then submitted to the box into a so-called biosensor.

"In the biosensor are peptides, a kind of microscopic tentacles, that stick to grey mould spores only. The peptides are attached to a scale the size of a few grains of sand called a cantilever. When the scale is weighed down by grey mould spores, the fungal warning system will set off an alarm in the nursery," explains Microbiologist and Sensor Specialist Majbritt Hauge Kyneb from Danish Technological Institute.

The detector is being developed by DGT by Senmatic, the project’s controller technology specialists, while the cantilever technology is delivered by AmiNIC ApS. The peptides are being developed at Danish Technological Institute, and Aarhus University are responsible for controlling measurements of the number of spores in the nurseries.

"Being able to offer an automatic and early warning of heightened spore levels is a great opportunity to help our customers, the nurseries, to avoid fungal attacks," says Mads Winther, Product Manager at DGT by Senmatic.

Will make nurseries greener
The aim of the project is not only to reduce the large output losses that nurseries risk when attacked by fungal spores, the new technology also aims to reduce the use of fungicides. The aim to reduce fungicides is highly welcomed by Merih G. Tesfamicael from the nursery PKM A/S that also takes part in the project.

"We look forward to being able to minimize our use of pesticides. It will make our nursery greener and minimize the risk of fungal spores developing resistance to the remedies used," says Merih G. Tesfamicael.

Can clear the way for more warning systems
If the partners succeed at developing an online warning system based on particle measurements and biosensors, it will be the first of its kind in the world. Therefore, it is estimated that it can clear the way for several detection systems aimed at detecting airborne threats, including other plant diseases, allergenic pollen, and livestock diseases.

The project takes place in the period 2021-2025 in collaboration between Danish Technological Institute, Aarhus University (Department of Environmental Science), AmiNIC ApS (sensors), DGT by Senmatic (controller technology), and the nurseries PKM, Lundegaard, and Hjortebjerg. The project is funded by GUDP – the Green Development and Demonstration Programme under the Ministry of Food, Agriculture and Fisheries of Denmark.