Diverse harvest in darkness and ice

Jess Bunchek, NASA guest scientist at the German Aerospace Center's (DLR) EDEN ISS greenhouse, is nearing the end of her mission in Antarctica. Bunchek has lived and worked for nearly a year as a member of the 41st wintering expedition at the German Neumayer III Station, operated by the Alfred Wegener Institute (AWI). She has survived extreme cold and nine weeks of polar nights. Without soil and with artificial light, she grew numerous varieties of vegetables and herbs during this time. The fully self-sufficient greenhouse produced an abundant harvest, including broccoli, cauliflower, and kohlrabi, for the hibernation crew which was isolated for months. The joint DLR-NASA test run shows promise for fresh food on future missions to the moon and Mars, as well as for climatically challenging regions on Earth.

"Never before have we been able to grow so many different types of vegetables and herbs during an EDEN ISS mission," says Dr. Daniel Schubert, head of the project at DLR's Institute of Space Systems. "Jess Bunchek has shown great skill and dedication here, allowing us to try out many new varieties, including some from NASA." 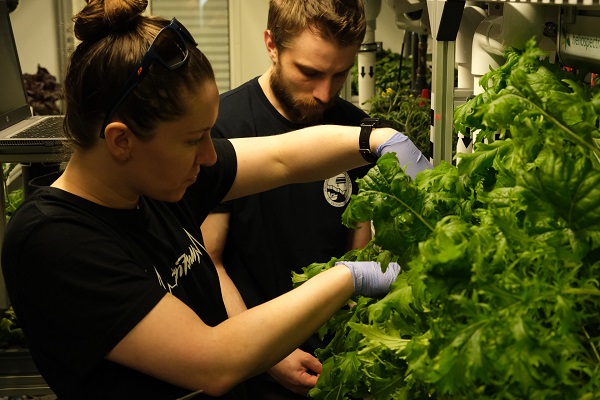 Rich harvest, from chard to oregano
Over the course of the year, Bunchek has had success growing a variety of plants and fruits, some of which have also been grown on the International Space Station (ISS), including several varieties of mustard and lettuce. The 'Española Improved' chili bell pepper provided spiciness and vitamin C to the menu as part of Bunchek's mission in Antarctica, as well as under very different conditions aboard the International Space Station (ISS) as part of NASA's Plant Habitat-04 experiment. Bunchek also grew tomatoes, cucumbers, beans, peas, leafy greens, watercress, arugula, broccoli, as well as cauliflower, Swiss chard, spinach, kohlrabi, pak choi, and radishes. She also grew several varieties of herbs, including mint, basil, parsley, chives, rosemary, thyme, and oregano.

"I'm relieved at how well the plants have grown so far," the botanist says happily. "EDEN ISS is unique and groundbreaking. We're collecting a huge amount of data on the performance and resilience of the system, the health and production of the plants, their environment and microbiology, on the food safety, nutrition and psychology of the crew, and on the inputs needed, such as electricity and water, as well as the labor time required." Ray Wheeler, senior scientist at NASA's Kennedy Space Center adds, "We very much hope to build on Jess's experience with EDEN ISS to gain a better understanding of what's needed to grow fresh food on future missions to the Moon and Mars."