“We try to put ourselves in our clients’ shoes and ask for a lot of feedback. We also do a lot of testing before we send products out to supermarkets,” says Georges Aczam, CEO of Montreal-based vertical farm AquaVerti Farms.

Georges and his co-founder began growing leafy greens in November 2017 in a vertical system built in-house. Within a year, the duo rented a larger warehouse and began commercial production of leafy greens. The farm’s main products are kale, arugula, and lettuce. AquaVerti Farms currently has a footprint of 800 square meters, of which 600 square meters is growing space. In February 2022, the company will be tripling in size to reach 2,350 square meters of total area.

The new farm is on its way

AquaVerti Farms produces roughly 36,000 kg of leafy greens per year. In December 2021 alone, they produced 3,000 kg. Now, with the company’s expansion project, that production will only increase.

“Our focus is currently on high-turnover crops that aren’t too expensive. Gram for gram, we are as expensive as our competition. We want it to be affordable while also providing the best quality,” explains Georges.

Farm or technology provider?
While AquaVerti is a first and foremost a vertical farm, having developed all its technology in-house could provide an additional income stream for the company. As Georges explains, becoming a technology provider is an ongoing internal discussion focused on determining the sweet spot between being a tech and a farming company. 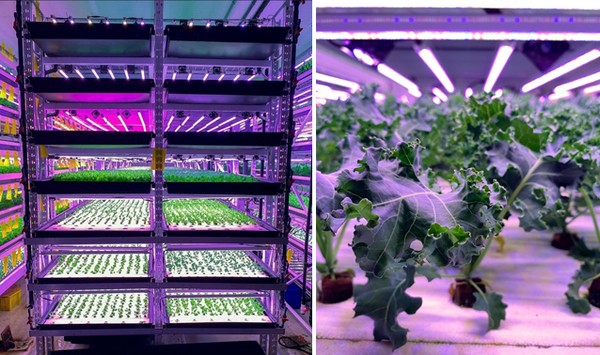 “We would need to see up to what point we want to be a technology or farming company. We’ve built an operating system, a full management farming system with data tracking and AI, two roots, hardware, and software. We’re also teaming up with the University of Sherbrooke to build a harvesting machine,” says Georges. “The demand for turnkey farms is getting higher, so we’re having the debate right now. The first step is building the first stage of our mega farm.”

With its current facility, AquaVerti Farms has consistently sold out its products through supermarkets and other retailers in Quebec. However, the company has been careful in its expansion to properly manage risk, scale up the technology and build its team to meet the demands of a larger facility.