Lilies can be grown without daylight, using LED

Under full-LED, lilies seem to grow well in general. Far-red light offers advantages, but leaf quality remains a point of attention. Those are the conclusions of the research carried out by Plant Lighting and Delphy Improvement Centre.

Lily is a relatively cold crop, so with full-LED lighting, only limited heating is needed. In 2020, it was shown that in a daylight-less pre-breeding period under LED, far-red light is needed to prevent cultivation delay. Low light intensity during the first weeks was also found to be sufficient. The question in this study last year was whether a good lily can be grown in the greenhouse with full-LED lighting and intensive screen use to reduce heat demand. Furthermore, the question was whether, in a greenhouse, where there are always some hours of daylight, a far-red requirement also applies. 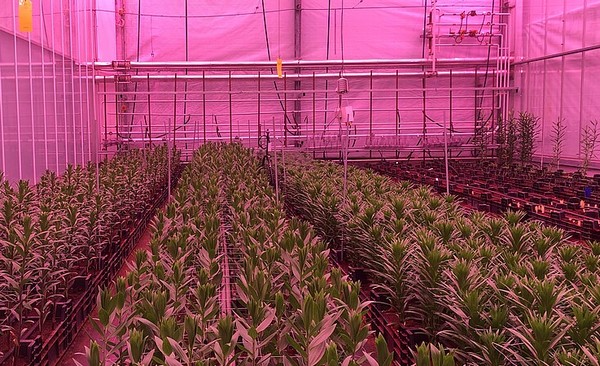 Two test greenhouses
In two experimental greenhouses, several lily varieties were grown in four traits during the period September 2020 to March 2021. In one greenhouse, lighting was done with LED RWB, and in the other greenhouse with LED RWB + 6 μmol far-red (RWBFr). Day length was 18 h, intensity 110 μmol/m²/s PAR, 24-hour temperature 18-19 °C, and CO2 was dosed during the day. Heat demand was limited by intensive screening and using the heating tubes only the heat demand.

Far-red light offers advantages at Orientals
Under full-LED, it appears that a good lily can generally be grown in terms of speed, branch weight, firmness, length, bud development, and vase life. For the Orientals and OT varieties, far-red offered clear advantages: higher cultivation speed (up to 12 days!), inhibition of excessive length growth in OTs Tabledance and Zambesi, and better vase life. Branch weight was generally slightly higher for OTs and Orientals without far-red, however, converted per mole of light for 90 cm branches, the far-red treatment actually produced more branch weight. For the LA and Longiflorum varieties, the benefit of far-red was less or inconclusive. While the elongation time of the LAs was several days shorter with far-red, branch weight was again somewhat lower. Whether far-red offers sufficient benefits here is for the grower to determine.

Challenge
For successful cultivation under full-LED, the challenge still lies primarily in leaf quality. Leaves sometimes showed chlorosis. Both substrate, light spectrum, and climate control could play a role in this.