Ÿnsect received a visit of Barbara Pompili, French Minister in charge of Ecological Transition, Minister for Nature and Nitrogen Christianne van der Wal, State Secretary Vivianne Heijnen, as well as Virginijus Sinkevičius, European Commissioner for Environment, Oceans and Fisheries and Pascal Canfin, Chairman of the Environment Committee of the Parliament. This event was on the agenda of informal meetings under the French Presidency of the European Union.

The production company, for which Ÿnsect received a European BBI JU grant, will start its operations in the second half of 2022 and will eventually produce more than 200,000 tons of insect-based ingredients. Ÿnfarm will then be a unique complex of 45,000 m² and 36 meters high for breeding beetles, including a fully automated food processing unit. 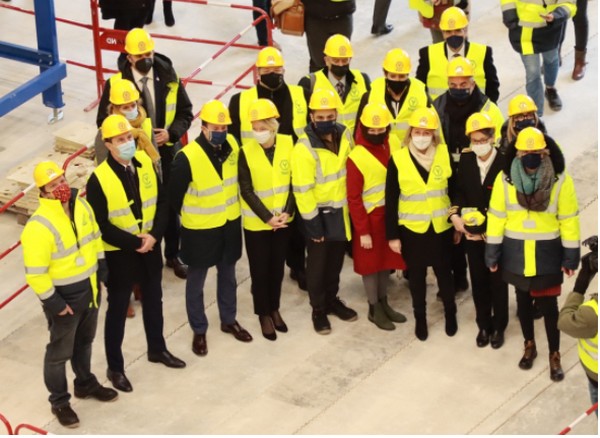 Ÿnfarm is above all a responsible initiative that will eventually create 500 direct and indirect jobs, the supply of which rests on the short chain: 99% of the raw materials come from local sources less than 350 km away. Ÿnfarm was designed and built with the objective of constantly reducing its impact on the environment, based on a clear roadmap to reach the 1.5°C target set by the Paris agreement in the next decade, while ensuring strong economic and financial growth.

Budget
Just recently, Ÿnsect's Board of Directors approved a multi-million euro budget over 18 years to meet its climate and biodiversity goals. Part of that budget will be used for "TerrHa 2040", a regenerative agriculture program that will contribute to the regeneration and conservation of soils and ecosystems for the agricultural sector in Hauts-de-France, by planting no less than 1700 km of hedges and trees on 1700 ha of plots (the equivalent of 1.8 million trees) by 2040.

Following this visit, Antoine Hubert, CEO and founder of Ÿnsect, was able to speak to ministers and European commissioners to underline the need for technological and commercial leadership in Europe in terms of insect production: "In addition to responding to some of the European Commission's major priorities for more sustainable, independent and resilient food supply chains - Farm to Fork, Stategy, Green Deal, Circular Economy Action Plan - our sector possesses unique development potential. By 2030, more than 20,000 recruitments are foreseen in Europe, accounting for a total business figure of several billion euros based on consolidated data from IPIFF (International Platform of Insects for Food and Feed), a European non-profit organization. To maintain this lead, we need help from European and national governments to create new markets and maximize the impact of our sector, by including insects in innovative support programs and ensuring that licensing standards and procedures are adapted to the particularities of our sector."

Antoine Hubert also cited the latest IPCC (Intergovernmental Panel on Climate Change) report and the importance of quickly putting official rules in place: "These rules already exist but they must be made mandatory, so that they are respected by everyone. For the success of the Paris Agreement, this is one of the most important points."

During the visit, Mrs. Pompili, Minister of Ecological Transition, stated, "Ÿnsect is a real local and national pride. I definitely wanted to introduce this company to my European colleagues during their visit to Amiens. The Ÿnfarm project is fully in line with the European will to fight against global deforestation, by finding alternatives to soy proteins for livestock farming. It is also an example of reindustrialization and job creation thanks to ecological transition - the company plans to create 500 direct and indirect jobs."

This visit was part of the program of informal meetings of ministers responsible for the environment and energy, following the French presidency of the European Union, which took place between January 20 and 22, 2022 in Amiens with the aim of promoting European employment and innovation.