System can be stacked and put in silo's e.g.

“Every stage or level would need a lighting source. By having a light source in the center with crops rotating around it, it reduces the amount of light required giving plants equal growth potential for upper and lower portions. Thus reducing electrical costs and our carbon footprint on the earth,” notes Ron Wiseman, Operations Manager with Innovative Licensing & Promotion, Inc., a Canada-based company. 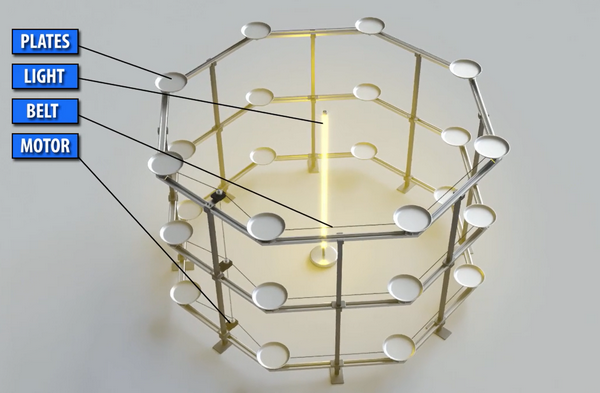 2 Innovative is presenting a new kind of farming system: The Rotating Table Plant Stand. The system can be used to grow basically any type of potted plant. To be a bit more specific; plants, flowers, fruits and vegetables, including homeopathic herbs and cannabis could benefit from this growth. The plants are rotated by a belt which runs through a pulley under each plant.

According to Ron, commercial-, industrial- and greenhouse growers could benefit from this system as it drastically reduces the need for large plots of land. The Rotating Table Plant Stand can be constructed in any shape or configuration and the stackable units allow you to grow up, reducing use of valuable land. “It can be easily implemented into silos or any type of vertical or horizontal structures.”

A silo structure of the system

Benefit of center lighting
By placing the light in the center of the system, it allowed more light to reach the lower portions. This resulted in increasing the productivity of the whole plant. Ron found that productivity increased to complete plants by rotating the plant around the light. This causes foliage to grow inwards rather than stretching vertically which reduces growth in the lower portion of the plant. Therefore, by using this technique, all portions of the plant produced more evenly.

Ron noticed that watching plants grow they were attracted to the light, which always was at the top of the plants. Upper portions seemed to flourish more so than the lower portions of plants which resulted in everything growing towards the light. 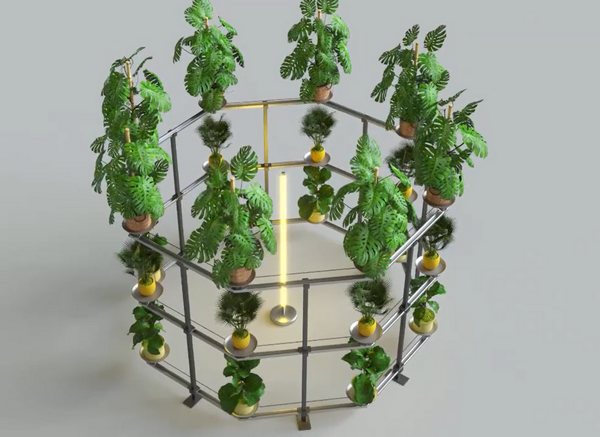 Open manufacturing and distribution rights
Developers of the Rotating Table Plant Stand are offering to license the manufacturing and distribution rights to qualified organizations. These organizations should be capable of producing the product and/or accessing the appropriate markets with the product. The Rotating Table Plant Stand is the subject of Patent Pending in Canada and the US. Other territories are being considered on an as needed basis.

Besides reducing electrical costs, the product has a low durability. As well as a major increase in plant production. Since the plants are moving, growers can reduce the amount of insect issues by having the plants in constant motion. By turning the plants, automatic watering would be more consistent.

According to Ron, The unit can be powered by multiple sources included in the patent, electrical, pneumatic, solar, gear operated mechanical devices.