Europe: Challenges and opportunities in CEA

"The potential which lies in the proper use of urban farming and CEA for cities is huge. There's even more added value when you get to talk about circular solutions, using waste energy and streams for food production," said Thera Rohling, Program director at the Sustainable Urban Delta Foundation (SUDF).

SUDF, established by Priva, highlights the benefits of CEA in cities and helps governments by showcasing how they can increase food production.

In a dialogue by FAO and EBRD on Urban Agriculture for Circular Cities, the participants spoke about the potential of adopting vertical farms in cities. The dialogue was part of 'The New Role for Urban Farming Conference' in December 2021. Amongst other joining participants globally were, Jan Westra (Priva), Matteo Vittuari and Giuseppina Pennisi with the University of Bologna and Isabella Righini (WUR).

Research on the self-sufficiency of cities
"City planning, which includes food production, is historically not a focus point of city governments, but for food to feed a growing population, it's becoming a major part of city planning 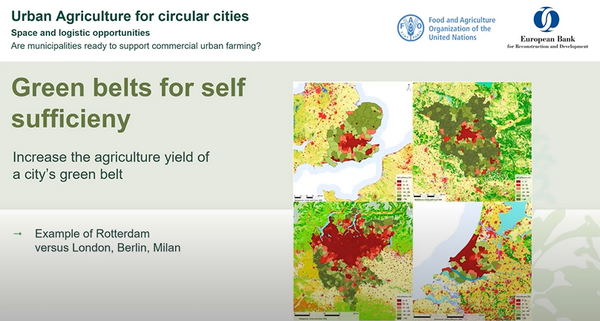 Green belts in Rotterdam (NL), London (UK) and Milan (IT)

In research on self-sufficiency in three European cities, Rotterdam (NL), London (UK) and Milan (IT) were analyzed on the size of their green belts that indicate their independence of food production. Green belts are areas that are needed, which comprise agricultural land, indoor and outdoor farms to feed the city. The red areas indicate the lack of food production in the area.

The image above indicates that London in particular has a high need for food production as this area is almost completely colored red. Thera said research showed that undeveloped land or deserted areas in cities should be used for all kinds of farming methods in order to greatly influence the potential of cities to become self-sufficient in food production.

Brussels and urban farming
"CEA has a high triangle of solutions to bring to the table, especially on the sustainability and predictability front," said Thomas Zoellner with Farm Tech Society (FTS). According to him, CEA helps connect solutions to critical challenges such as socio-economic trends, technical adoption through training and workforce development through new careers, and Agro-climatic changes through resource use and land competition - close to the consumer.

In Abattoir, a previous slaughterhouse and fresh market, located in Anderlecht a city close to Brussels, a Brussels Lighthouse Cluster is held by FTS. Three independent companies are currently operating in the building: BIGH (an aquaponic rooftop farm), Urban Harvest (an agtech supplier) and ECLO (a vertical mushroom farm).

Challenges in CEA
In general, the CEA industry challenge is the lack of reliable data, minimal viable standards and the market size. Thomas explains that it's currently hard to be viable for a CEA company as a kg of tomatoes doesn't support an operation like a rooftop greenhouse, as well as a lack of recognition of its added values.

"In the Brussels area, there's no true evaluation and economic map of all urban farm activities. Many regulations aren't applying to urban agriculture yet, which makes it crucial to start focusing on setting data and economic understanding of the activities in the sector," noted Thomas.

According to Thomas, the best initiative would be creating a balance sheet with all products cultivated by urban farms (either indoor or outdoor) in Brussels that showcases the benefits, relevance and importance of the sector.

Thomas noted that together, we should create better recognition and visibility to obtain more advantages in terms of ag regulations. However, in order to develop regulations around it, the first thing needed is data.