Scientists to develop crops that make their own nitrogen

Scientists are one step closer to giving more plants the ability to harness nitrogen-fixing bacteria, which would reduce the need for fertilizer, and in turn, lower costs for farmers and mitigate environmental impacts.

Nitrogen is an essential building block of life. Plants can only absorb nitrogen in some of its chemical forms. Some of these forms of nitrogen are naturally found in soils, but usually not in quantities needed to reach adequate crop yields. Nitrogen is plentiful in the air, but in a form plants can’t use. 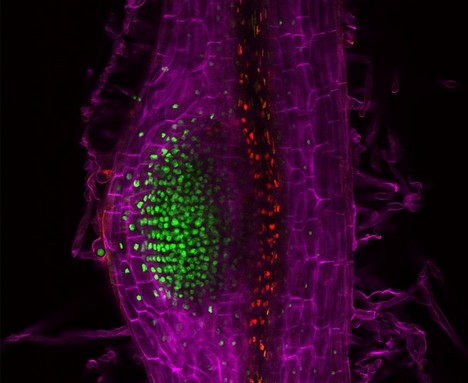 A technique that causes fluorescence allows researchers to see how the hormone cytokinin is involved in forming root nodules.

“Some bacteria that live in the soil are able to convert atmospheric nitrogen into one of the forms plants can use — this is called nitrogen fixation. A few plant species, mainly in the legume family, have evolved root nodules that attract and host these bacteria. These nodules allow the plant absorb the nitrogen the bacteria fix, and in exchange, the bacteria get sugars from the plant,” said Matias Kirst, a professor of plant genomics in the UF/IFAS School of Forest, Fisheries and Geomatic Sciences and a member of the UF Genetics Institute.

“The big questions we have are, can we teach other plants to make nodules, and will these nodules attract nitrogen fixing bacteria?” Kirst said. Before these questions can be answered, scientists need a better understanding of how legumes, the original nitrogen-fixing plants, form their own nodules. Uncovering this complex process could allow scientists to replicate it in other plants, said Kirst, senior author of a new study that unpacks that process.

“When legumes come in contact with nitrogen-fixing microbes, we know there is a big surge in a plant hormone called cytokinin and that this leads to nodule formation. In this study, we wanted to get a real-time picture of when that surge happens and where the activity is happening in plants that forms nodules,” Kirst said.

Fluorescence
To observe that play-by-play, the research team used a technique that causes fluorescence in the presence of cytokinin — the area glows in the dark — allowing researchers to see the hormone’s every move. They found that cytokinin activity happens in two stages. In the first stage, cytokinin is produced in the outer layer of the root and moves inward. In the second stage, that inner part of the root pushes outward like a balloon, forming the nodule.

The study also found that this second stage of cytokinin activity is controlled by a gene called IPT3. They confirmed this both through the fluorescence technique and by observing plants that were missing the IPT3 gene. In the plants missing the gene, nodule formation didn’t occur, which tells the researchers that this gene plays a key role in the process. All plants have cytokinin and the IPT3 gene, Kirst said.

“Biologically speaking, every plant has the ingredients for making a nodule, but it’s a matter of expressing the right gene at the right time and place. This is what we’re learning from this research. We hope to apply this understanding to developing plants that can generate nodules,” Kirst explained. After that, the next big question is whether nitrogen-fixing bacteria will move into those nodules, Kirst said.

The study, which is published in the journal “Plant Physiology,” was authored by an interdisciplinary team of researchers from UF/IFAS, University of Wisconsin – Madison and the Noble Research Institute. The study was supported by a grant from the U.S. Department of Energy.