Algae are the more efficient “plants”

Photosynthesis is a process in plants and algae that has become established and constantly adapted over the last three billion years. In crops, however, researchers assume that it still does not run efficiently, so they could further improve this important process and thus increase the yield of crops. A role model could be algae, which have adapted to very extreme locations in many cases. However, it has hardly been possible to analyse them in detail until now. A new method recently published in Nature Plants by researchers at the Max Planck Institute for Molecular Plant Physiology (MPI-MP) should help to close these knowledge gaps in the future.

Photosynthesis is considered the most important process for life on earth as we know it today. On the one hand, oxygen is produced, which is the basis for animal and human life, and on the other hand, it is the fundamental process in plants to form biomass. Depending on where photosynthetic organisms live, they have to cope with very different conditions and have, accordingly, partly adapted their photosynthesis. Algae in particular often live under very extreme conditions and have undergone a wide variety of metabolic adaptations.

In the last half century, plant breeding has increasing the yield of crops, focusing especially on resistance to pathogens and plant architecture. In recent decade, photosynthesis itself is increasingly becoming the focus of breeding with the aim of achieving a further increase in crop yield. Improving the rate of photosynthesis could make plants more efficient, an important goal since the possibility of "conventional" yield increases has stagnated greatly.

Optimization possible
But is it even possible to optimize a process that is over three billion years old? Yes! The selection pressure has not diminished even today, as first, ancestors of many crops have evolved to grow optimally under natural conditions which differ from those in which they are cultivated, and second, many of environmental factors that affect photosynthesis are constantly changing, such as temperature, precipitation or carbon dioxide content in the atmosphere. Moreover, first steps towards genetic improvement of photosynthesis in crop plants have already yielded promising results.

Moreover, it is known that photosynthetic efficiency in higher plants is far from having reached its maximum. Algae, on the other hand, already have a much better photosynthetic efficiency. "Therefore, we suspect that algae could serve as a future template for crop improvement," explains Dr Haim Trebes, who worked at the MPI-MP supported by a Human Frontier Science fellowship and is now a senior lecturer at Tel Aviv University. "So far, this source has been little exploited, yet algae exhibit great metabolic diversity due to their diverse adaptations to extreme environmental conditions." 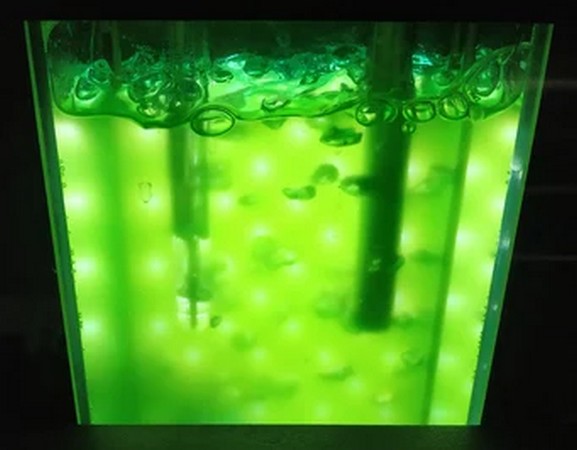 The challenge so far, however, has been the lack of suitable technologies for precise analysis of metabolic processes in algae. Researchers at the MPI-MP led by Haim Trebes and Mark Stitt have now published a methodological approach to close this gap. Using labelling with a heavy isotope of carbon dioxide, they were able to measure and quantify metabolic fluxes in different algae and compare the results with those from vascular plants like Arabidopsis and maize. Even very fast reactions, such as carbon fixation during the photosynthesis process, could be analyzed.

The newly developed methodology paves the way for future analyses of algae, which could provide a solution for sustainable nutrition. This could, for example, make algae available as model organisms to further optimize photosynthesis in higher plants in the future.