Australia: "Covid drove us to find new ways to innovate with overproduction"

“Right now, being a farmer is tough, but on the other hand, desperation can sometimes drive innovation. It’s been frustrating to have these fluctuations due to covid, but at the same time it really pushed us to innovate in our product offering and production systems, and more recently with overproduction,” says Noah Alessandro, founder and CEO of Urban Green Sydney (UGS).

UGS is a vertical farm, based in Sydney, that targets restaurants, wholesalers, and more recently home consumers. UGS produces living microgreens, pre-cut mixes and boutique salad blends. UGS’ product lines include over 45 different varieties, and are constantly meeting requests to develop and add new custom products to their shelves. 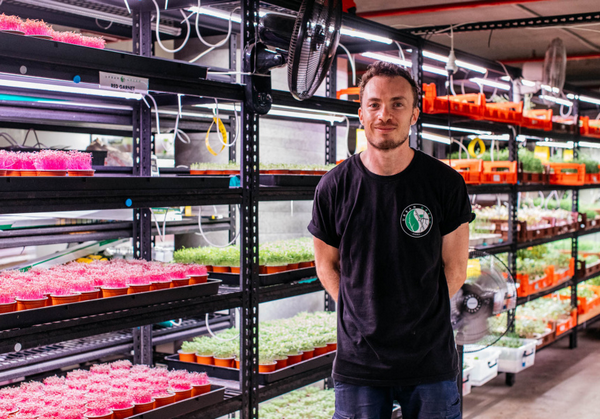 Entering wholesale markets
If you want to get scale in this industry, according to Noah, then you have to sell through wholesale markets, otherwise, you’ll become a logistics business. The problem is that the markets are traditionally hard to crack into because of strong existing relationships between growers, the market authorities and distributors.

Luckily, Noah managed to break into the major wholesale market early on in the business because from the beginning he recognized how important it was to have a strong brand that chefs ask for. It probably also doesn’t hurt that he's am an ex-chef.

Noah adds, “My immediate goal is to become the trusted grower of specialty produce for the restaurant industry in NSW. This includes microgreens, baby leaf varieties, boutique salad mixes, petite vegetables, and edible flowers. In the future, we'll be looking to grow more substantial fruit and vegetable varieties, such as alpine strawberries or dwarf peppers which are of particular interest.” 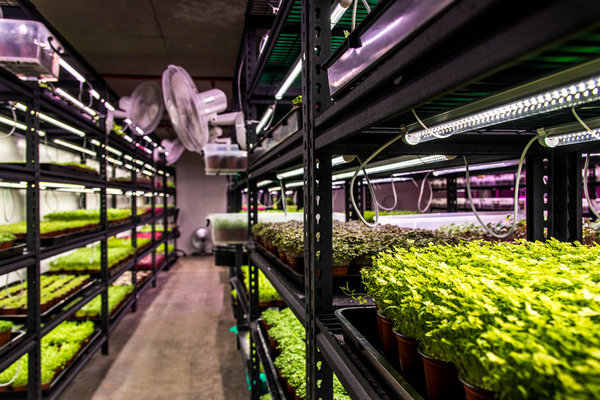 Covid fluctuations
After trialing for some months at home, then taking out samples, they were blown away by how much their products were in demand. And after pulling in big orders, had to find a production facility. They were lucky enough to find a space in a warehouse, which they moved into the next day.

“Those first few years were exciting but incredibly tough. I spent the latter half of 2019 planning the relocation of the business to what would be its home for the next four years, in the middle of Sydney’s CBD. So having the waves of COVID-19 lockdowns hit literally weeks after we moved into the new farm in February 2020 was particularly difficult to swallow."

According to Noah, microgreens are still a pretty niche product that are mostly used by restaurants, so lockdowns have been really difficult for us. Because of their pleasing aesthetic, and huge amounts of flavor, chefs love them to elevate their cooking. But they are also highly nutritious and really fun to explore as a home cook. "So we have started to sell to the consumer market by sharing these facts," Noah explains. 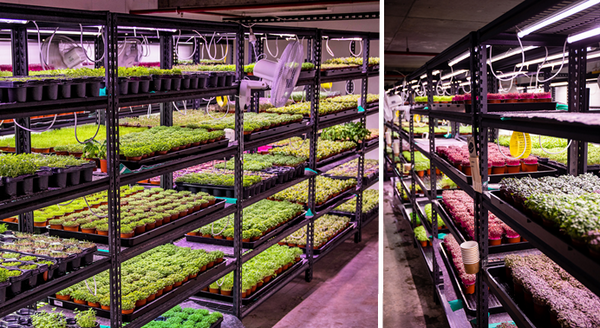 Solving overproduction
For the first two years, UGS was growing per customer with only a very small amount of overstock. Until Covid, Noah says the problem was more underproduction than over, normally selling the farm out. But it’s not always easy.

“When you’re growing upwards of 5000 punnets per week across 45 lines, and supplying to 40-50 restaurants, it can be hard to get the balance right of how much of each variety to grow - especially as you’re operating on an average 14-21 day timescale, constantly predicting the market. But it’s essential that you get this balance right, unless you’re going for a grow-to-order model. We’re now getting to a size that it’s even more important to have systems to manage overstock and avoid waste” adds Noah.

Noah explains that in order to manage overproduction, excess produce is sold in mixed live boxes, or pre-cut salad mixes. Normally, the microgreens are sold live in small pots. When selling living microgreens, there are less regulations involved than when cutting, washing and processing them since that’s a whole different category. Therefore, until now UGS was focusing on boxes with 12-15 mixed punnets. “That’s still what we are kind of most known for, but we are now selling way more precut mixes than before the pandemic. I think that’s the way that the microgreens market is heading.”

During the second lockdown, Noah found another solution for his overstock. He explains that the amount of product was simply too great to have any realistic chance of selling in time. “The only way I could see of using that much product was processing it into secondary products that also had a longer shelf life. So we started experimenting with a few customers and came up with some cool products like basil oil, shiso vinegar and others. Just as we were about ready to start launching a couple of them, the industry opened up again as quickly as it shut, and everyone was crazy busy again. The great thing is that now we have even one more way to control wastage. Eventually, I would like to develop an entire product range to add to our online shop. However, thus far, we don’t have the flexibility yet to roll out a bunch of them,” Noah claims. 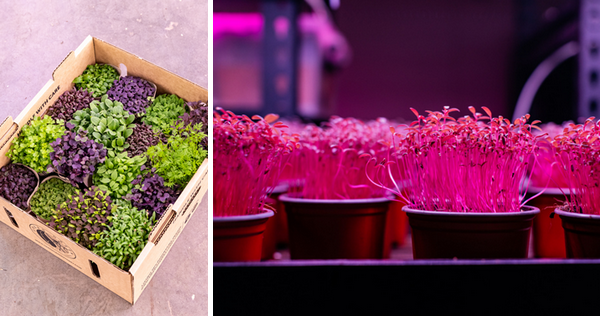 Farming of the future?
UGS is looking for investment to scale up production and reach their business goals, but probably not VC. Most likely impact or angel investors as the company is not sure that the current model would satisfy VC funds'. Especially, with the usual timelines for economic returns of their investments.

Noah says that because UGS has never had any major investments, they’ve been forced to be creative in coming up with solutions that didn’t always include the most expensive technology.

“I think a lot comes down to design, both physical and process related. And often there are simple solutions to problems that don’t always require technological intervention. I know that if we were to receive investment now, we’d be a lot more careful than others about the way our money is spent at the farm. I feel that investment needs to be balanced out. We might be at the extreme end of operating without much investment in tech solutions, but then there’s the other extreme of going full automation,” adds Noah. “I’m not at all anti-tech, but I think it’s important to always ask what the objective is first, and not just use technology for technology’s sake.”

Noah isn’t too excited about the idea of automated plant factories as he feels we’d be replacing one broken system with another. There’s a movement against factory farming and large scale ag. “It seems like most of the huge vertical farming companies are trying to take humans out of the equation by applying as much automation as possible. To me, that’s a bit funny, because what are we actually trying to achieve with vertical farms? What problem are we trying to solve? To me personally, the real power of vertical farms is to help connect people to food production and robot-run plant factories don’t seem like they’re doing that. There’s so much potential for education and workshops on educating society on that aspect. I’m just not sure that’s possible in these farms,” Noah claims. 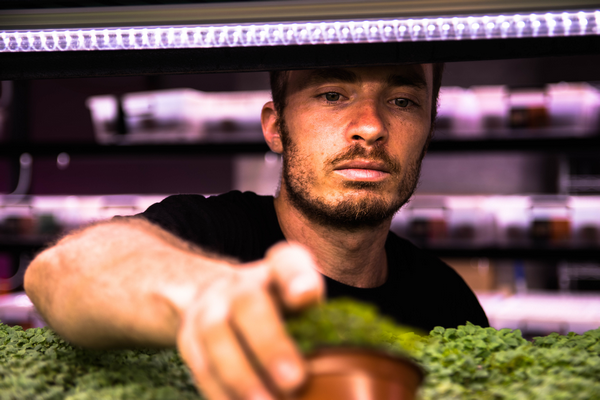 Specialty produce market potential
According to Noah, there’s big potential in the specialty produce market, which is a key part of the UGS’ business plan. Noah is also really keen to develop a range of different educational programs to teach people how to grow their own food and build a community, in order for them to create a meaningful bond between chefs, farmers of all kinds and consumers.

“As for vertical farms, I don’t think they’re the entire solution to our food crisis, and frankly it's shortsighted and dishonest when people say otherwise. But they are for sure an indispensable component of a resilient food system going forward. With locations like our farm in particular (right in the middle of Sydney's CBD) they have the power to connect people to food production and start conversations around the future of our cities and how we nourish the human populations within them,” Noah affirms.

Sustainable packaging
Ever since the beginning, the company wanted to stay sustainable in all its processes, rather than retrofitting their systems later on. UGS uses biodegradable packaging which is a simple solution using recycled paper sleeves. However, Noah admits that they still have to transition from the (albeit recyclable) plastic cups where herbs are sold. Rather than sell the punnet packaged inside a single-use plastic sleeve, instead, they place it inside bio cups that can then be collected from customers after using them, and put into circulation again. 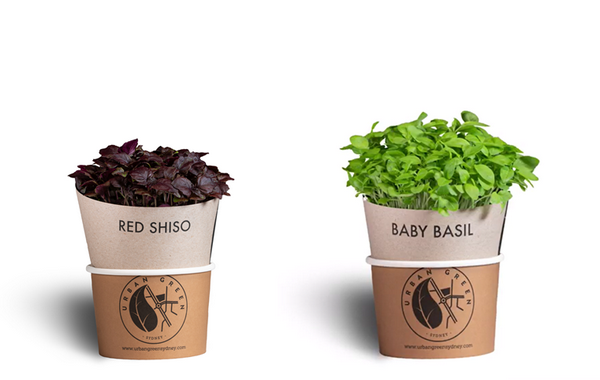 “Especially when we started, many discouraged us to use our sustainable packaging as it’s more expensive and too much of an effort. However, we now see that the looks really stick to people and it’s the first thing they comment on,” he adds. Throughout various lockdowns, UGS also had time to innovate, growing some of their live herbs in fully biodegradable plastic-free cups, as well as building a much more efficient watering system.