In Kingsville, ON, in the heart of the Canadian greenhouse industry, vertical farming has taken root through Ortaliza, a vertical farm located in downtown Kingsville. The farm was founded by Alvaro Fernandes (COO) and Carina Biacchi (CEO), a couple from Brazil that moved to Canada six years ago and launched Ortaliza during the pandemic.

Carina and Alvaro describe themselves as both life partners and business partners, having both a family and a business together. Alvaro comes from an agricultural background, with his family mostly involved in field agriculture while he studied to become an agronomist-engineer with a passion for controlled environment agriculture. Carina brings the business and corporate experience to Ortaliza as she had a corporate career when she met Alvaro but dreamed of having her own company and being an entrepreneur. 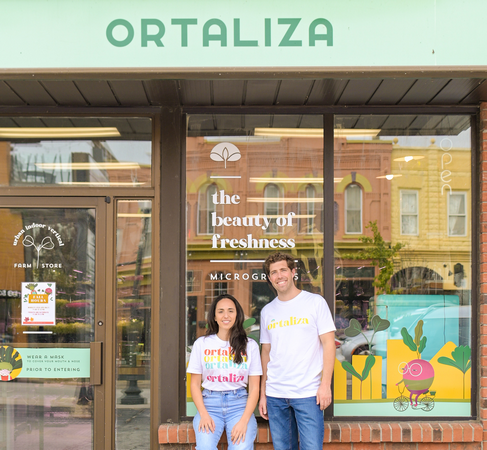 “We started dreaming about the vertical farming idea since we met because Alvaro always had a passion for vertical farming and I had one for business. We have a complementary skill set that allowed us to build this start-up and have our first location,” Carina says.

Farm and storefront combined
As Carina and Alvaro explain, Ortaliza is unique in that the company has a farm-storefront model through which microgreens are grown on-site and sold through a storefront at the front of the building. According to Carina, this is the first of its kind in Canada, as most vertical farms distribute their product primarily through wholesale or B2B models. 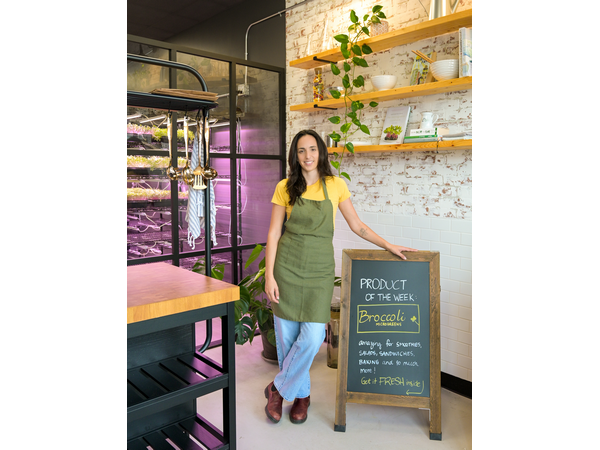 “Vertical farming is usually hard to experience from the consumer standpoint, so we decided to be a direct-to-consumer vertical farm to educate consumers on vertical farming, food and healthy eating. Our customers can actually see the production and watch it be harvested on-demand,” Carina explains.

Ortaliza grows more than 65 varieties, some of which are destined to restaurants and chefs but most of which are provided directly to consumers through the storefront, online purchasing or Ortaliza’s subscription service. 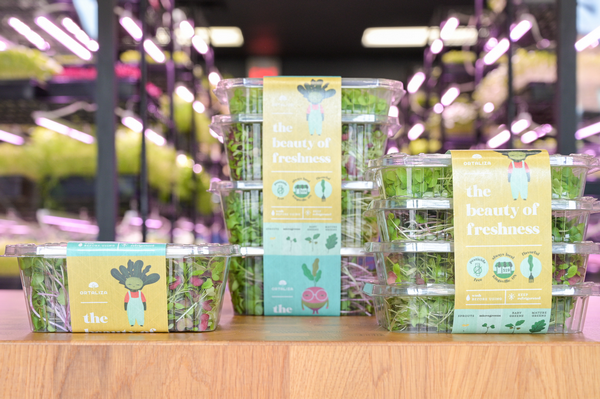 Kingsville location as a prototype
Ortaliza’s first farm is located in downtown Kingsville, in the heart of the largest concentration of greenhouses in North America. While it may seem like an odd choice given the immense local production, the primary crops are tomatoes, cucumbers and peppers, with lettuce, strawberries and cannabis on the rise. And despite the large production values, much of it is exported and distributed across Canada.

“Having these storefronts allow us to provide high-quality and diverse products locally. Our customers’ feedback on what we are doing is invaluable, and we can see that we are filling a gap that was missing,” explains Alvaro. 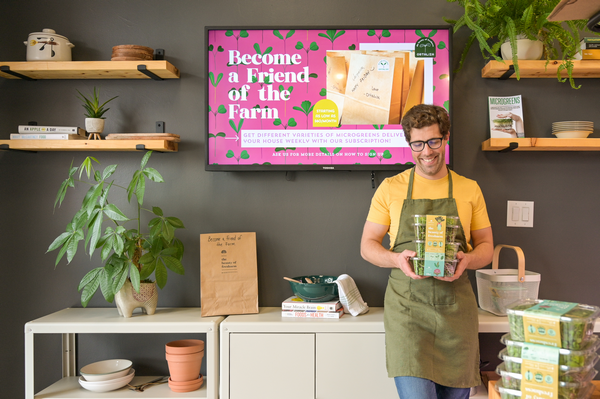 In the future, Carina and Alvaro will build similar farms in other communities by further developing their micro-farming techniques and technologies. As Alvaro explains, having farm-storefronts in urban locations means that space is very limiting, yet most vertical farming technologies are designed for large-scale facilities. In order for Ortaliza to expand, Alvaro and Carina are currently developing technologies that can be adapted for smaller footprints in collaboration with strategic partners

“We are focusing on our market approach first to see if it makes sense before pouring money into technology. Later, if we decide to bring investors on, we will have a reliable business model to show them because we have not just developed technology and hoped it would work,” says Alvaro. “We have something that is rooted in community.”