Emiel Smits, master's student in Plant Sciences at Wageningen University, is doing a graduate course on growing potatoes on mist.

The potato plants, now 2.5 months old, grow like cabbage, as do the roots. Smits is particularly testing which drop size gives the best results. Growing on mist has a number of advantages, says Smits. "Potato plants lack oxygen in the soil and that hinders their growth. Also, the crop-without-soil does not suffer from soil diseases, including the hard-to-control soil nematodes. And thirdly, the plants can be placed close together; Smits is thinking of 20 potato plants per square meter."

The only downside of Smits' trial: the potato tubers are not yet growing well. "That is my own fault. I do have the ideal environment for the plants in this greenhouse, but two weeks ago I found out that tubers of the plants are actually formed by stress. That's why I've put less nutrients in the water droplets now: that creates some stress. But I also need to create a day-night rhythm and mechanical stress to stimulate tuber formation." 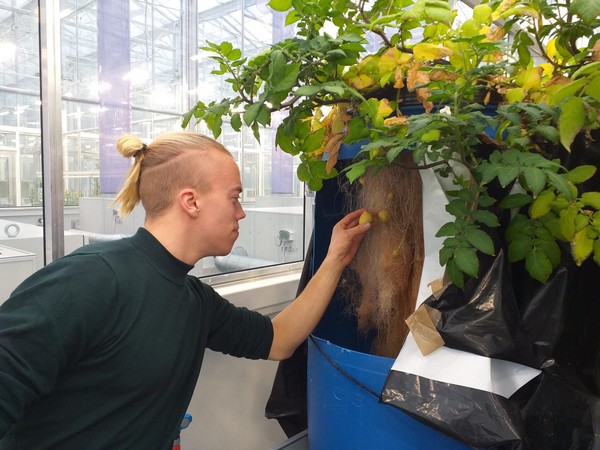 Aerapples
Smits thinks that 'aerapples' have a future. 'It is already applied on a small scale in Switzerland in greenhouses, but also in the Netherlands, this crop is starting to become competitive. The fertile soil for growing potatoes is decreasing and becoming more expensive, while the technology of this aeroponics is becoming cheaper.'

Growing potatoes on mist can be done both in the greenhouse and outdoors. Cultivation uses 95 percent less water than cultivation in open ground, says Smits. Pesticide use can also be reduced by 80 percent in the open air (where phytophthora and Colorado potato beetles occur) and 100 percent in the greenhouse. He is still calculating the profitability of an acre of potatoes on mist.