The returns system TrayC, which Modiform launched together with Landgard in early 2021, will be expanded to include an additional six trays. With the five models previously added, TrayC comprises eleven trays. The trays are made of 100% recycled polystyrene (PS) – that means zero use of virgin plastic. As Modiform does not add any dye, it is the recycled material that determines the colour of these trays. In addition, all models are now suitable to be used several times. TrayC ensures that transport trays are kept within a circular system. The expansion is another step towards making the industry more sustainable. 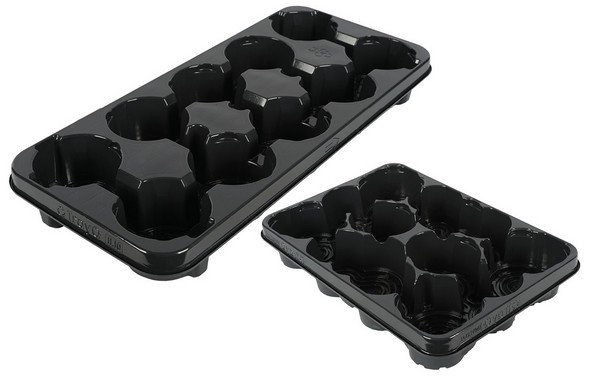 Landgard takes back used trays from German DIY chains via a returns system. At a central collection location, the trays are sorted for reuse or recycling. If reuse is no longer possible, Modiform recycles these trays in-house and makes them into new trays. The uniform use of one type of material – specifically PS – increases the recycling rate. This makes the process of recycling easier, more efficient, and therefore more sustainable. Trays from the TrayC range are therefore more than just trays; they are an important part of a larger circular system.

With Horizon2025, Modiform has formulated an ambition to work with the entire supply chain to bring about sustainable change in the sector. John van der Maarel (Sales Director at Modiform) says, ‘We are proud to have started and to expand on this innovative cooperation with Landgard. It is one of the examples of collaboration with the entire supply chain to both achieve our ambition of Horizon2025 and to close the material loop. With TrayC, our customer knows for sure that they are making a sustainable choice.’

TrayC models
The newly included trays are suitable for pot sizes 9-13 cm and can be loaded up to five or six trays per Danish shelf. Of the other models for pot sizes 9-13 cm, four trays fit on a Danish shelf. These models were produced in cool grey/black, but will be produced entirely in black from now on. With the addition of the new models, TrayC will be further rolled out at Landgard Cash & Carry shops. Growers can also use the TrayC trays for other situations. You can recognise the TrayC models by the TrayC logo.