“From our perspective, we’ve created a repeatable model that will be profitable from the first year. We’re going to apply a plug and play template, building five farms in five years,” says Chris Davies, founder and CEO of Harvest London. Recently, Harvest London hosted VerticalFarmDaily in their London facility.

Five farms in five years
Chris says the plan is for the first of these farms to be 5000m2, the second and third are going to be 10.000m2, with the fourth and fifth at 25.000m2. Harvest London is working with an investor on the plan, which would see the company responsible for operating the farms and selling the produce grown. 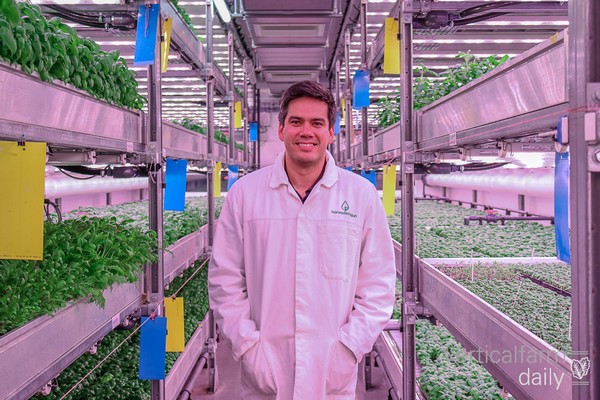 According to Chris, a fundamental strategy for vertical farming is expanding the product range. In general, moving into higher-value crops is a strategy for everyone. “The aim is to optimize production to keep reducing costs while maintaining value, targeting better profit margins.” Strawberries are going to be on the menu, along with fruiting vines like bell peppers, cucumbers, tomatoes and eggplants. Mushrooms are definitely something Chris is thinking about, as well as a pharmaceutical focus in terms of production.

60% of Harvest London’s basil production is sent directly to Pizza Pilgrims. “We optimize our product for how our customers actually use it. Pizzerias, for example, only make use of the basil leaf itself, meaning that we need to focus on the number of leaves, rather than the total weight, which is what the wholesale industry would normally sell. We’re not focusing just on yield anymore, but on the usable yield.”

Chris explained that basil plants will grow bigger, but the number of leaves won’t actually increase after about 18 days, so it doesn’t make much sense to keep them in the farm longer. Harvest London has become much more efficient over time by reducing the growing period of basil inside their farm. 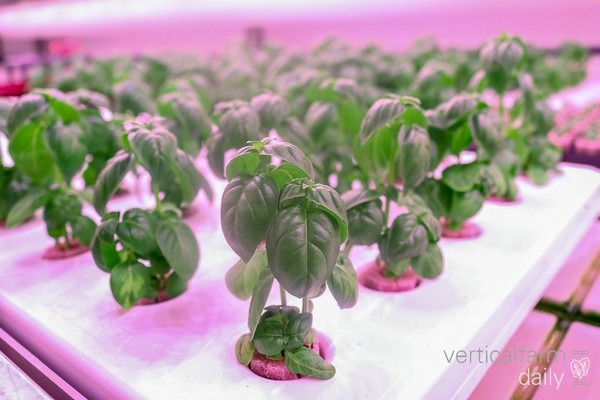 Space optimization
The two farms Harvest London has built to date have been on a hardware-agnostic basis - the company doesn’t make its own vertical farming system, instead combining the best available technologies. Ani, the software that Harvest London built themselves to optimize farm production, has been designed to be interoperable with different hardware.

Using Ani, the company has been able to increase basil productivity by 35% in a year. Continuously improving by running trials on factors like density, from seedling to the point the plant is harvested, has enabled Chris’ company to make decisions that benefit both them and their customers: for example, crop densities that produce smaller individual plants but greater overall biomass for a given area. 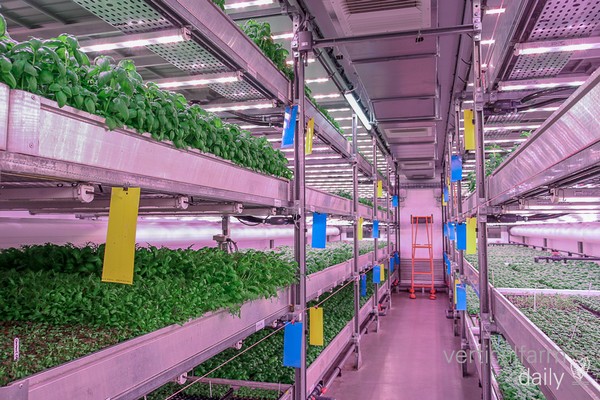 “Space optimization is mainly what Ani is doing for us, increasing how much productivity we get out of every plug and our total kilos per square meter per year. From a combination of density trials and choosing the right crop varieties, we are driving up the usable yield we produce,” Chris notes.

Besides basil, the company is growing various greens and brassica varieties, and other herbs, for restaurants. Chris affirmed that ever since March 2021, they’ve been completely sold out. Therefore, the company has big expansion plans for this year. Building on what they have learned in the current farm, the aim is to construct a 5000m2 facility in South London. Soon, more news can be shared about that, Chris explained. 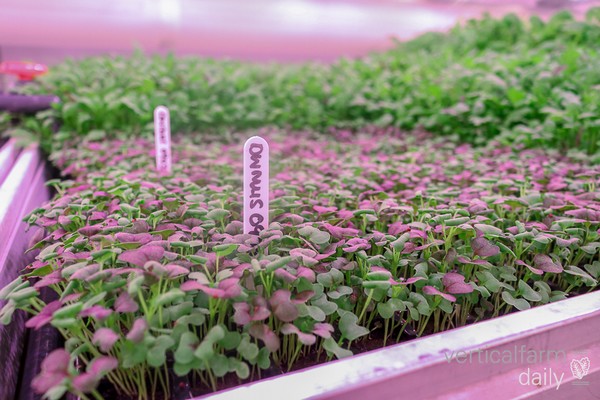 Private equity rather than venture capital
According to Chris, 2022 is a pivotal year for vertical farming. He has spent a lot of time with investors not only in the Agtech space, but in the wider investor community. “There’s a growing level of maturity on how people are looking at vertical farming. The interest is less from venture capitalists, more from private equity firms, who have different priorities and behave in a slightly different way. They are more risk-averse, putting a level of stringency in process, looking at the business from top to bottom.”

Chris explains that he is raising a substantial amount of money for a model that is a productive and profitable farm from the start. This has not always been the case for vertical farming companies in the past.  “Normally the focus has been on building technology, being a farmer, or both. Being a farm, hardware, software, and automation company is nearly impossible. In the UK, venture fundings are going down, but the private equity firms that already own sustainable infrastructure assets like solar farms are getting interested. They’re not afraid to write big capital cheques. VCs want the low CAPEX investments, but building at-scale vertical farms like we’re doing means owning large capital assets” Soon, a name will be given on the funder behind Harvest London’s new farm.

Europe has a much more conservative investment landscape. In Silicon Valley, several vertical farming companies have been able to raise hundreds of millions at early stages. However, it’s good for the industry, as there is a lot of smoke and mirrors in vertical farming. European startups are a lot more disciplined, according to Chris, and have to focus more on ROI.